A major history of technology and Western conquest 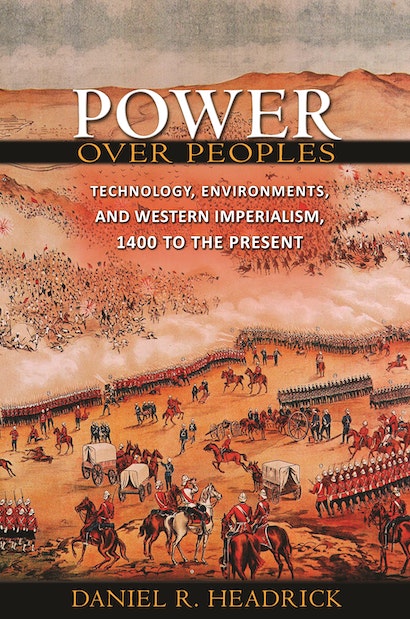 For six hundred years, the nations of Europe and North America have periodically attempted to coerce, invade, or conquer other societies. They have relied on their superior technology to do so, yet these technologies have not always guaranteed success. Power over Peoples examines Western imperialism’s complex relationship with technology, from the first Portuguese ships that ventured down the coast of Africa in the 1430s to America’s conflicts in the Middle East today.

Why did the sailing vessels that gave the Portuguese a century-long advantage in the Indian Ocean fail to overcome Muslim galleys in the Red Sea? Why were the same weapons and methods that the Spanish used to conquer Mexico and Peru ineffective in Chile and Africa? Why didn’t America’s overwhelming air power assure success in Iraq and Afghanistan? In Power over Peoples, Daniel Headrick traces the evolution of Western technologies—from muskets and galleons to jet planes and smart bombs—and sheds light on the environmental and social factors that have brought victory in some cases and unforeseen defeat in others. He shows how superior technology translates into greater power over nature and sometimes even other peoples, yet how technological superiority is no guarantee of success in imperialist ventures—because the technology only delivers results in a specific environment, or because the society being attacked responds in unexpected ways.

Breathtaking in scope, Power over Peoples is a revealing history of technological innovation, its promise and limitations, and its central role in the rise and fall of empire.

Daniel R. Headrick is professor emeritus of social science and history at Roosevelt University. His books include The Tools of Empire and The Earth and Its Peoples.

"For professional historians—and especially for those dealing with the events of the early modern and modern world and with the progress of technical advances most of the latest book by Daniel R. Headrick might seem like a comforting walk through a very familiar landscape. The road's main twists come as no surprise, but it is good to see them yet again, surveyed with a macroscopic perspective that captures all important features and, here and there, highlights interesting details."—Vaclav Smil, American Historical Review

"Daniel R. Headrick is right to think that insufficient attention has been paid to how technological change and environment shape imperialism, and his work is an excellent attempt to remedy that deficiency."—Peter Cain, The Historian

"This is an interesting, clearly-written, and well-researched book. In an era of academic specialization, it is also attractive for its willingness to tackle one of the largest and oldest questions of world history. While technology is the theme, the author carefully frames and qualifies his argument so as to avoid the pitfalls of reductionism. While this book should find a place in courses on economic history, the history of technology, and the economics of imperialism, its accessibility should also make it attractive to the reading public."—Robert E. Prasch, Journal of Economic Issues

"Headrick provides a magisterial and highly readable survey. . . . The work is perhaps most eye-opening in describing conflict in regions often left out of more sweeping accounts—colonial expansion in sub-Saharan west Africa or Algeria, or conflict in southern Latin America. . . . [T]his book will enable [historians] to understand the place of technology in broader narratives of change all the more effectively."—Paul Warde, Cultural and Social History

"[T]his is a major contribution from an important academic built on decades of experience. I am a better scholar for having read it, and chances are that you will be too."—James Daschuk, Environmental History Journal

"This is a major contribution to historical studies, as well as the study of technological change and economic history. Headrick asks a set of questions that are infrequently discussed, and analyzes them in an interesting way. This will be an important and widely cited book."—Stanley L. Engerman, University of Rochester