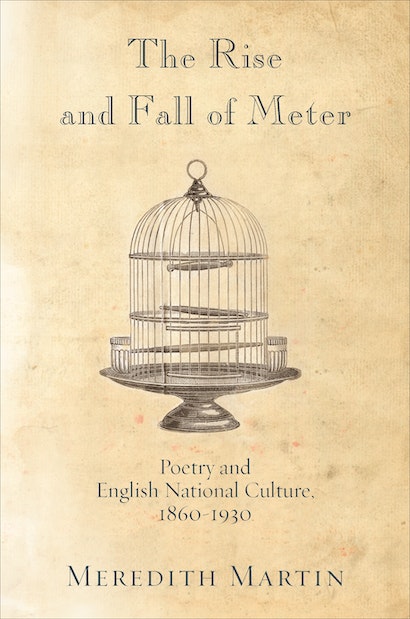 Why do we often teach English poetic meter by the Greek terms iamb and trochee? How is our understanding of English meter influenced by the history of England’s sense of itself in the nineteenth century? Not an old-fashioned approach to poetry, but a dynamic, contested, and inherently nontraditional field, “English meter” concerned issues of personal and national identity, class, education, patriotism, militarism, and the development of English literature as a discipline. The Rise and Fall of Meter tells the unknown story of English meter from the late eighteenth century until just after World War I. Uncovering a vast and unexplored archive in the history of poetics, Meredith Martin shows that the history of prosody is tied to the ways Victorian England argued about its national identity. Gerard Manley Hopkins, Coventry Patmore, and Robert Bridges used meter to negotiate their relationship to England and the English language; George Saintsbury, Matthew Arnold, and Henry Newbolt worried about the rise of one metrical model among multiple competitors. The pressure to conform to a stable model, however, produced reactionary misunderstandings of English meter and the culture it stood for. This unstable relationship to poetic form influenced the prose and poems of Robert Graves, Siegfried Sassoon, Wilfred Owen, W. B. Yeats, Ezra Pound, and Alice Meynell. A significant intervention in literary history, this book argues that our contemporary understanding of the rise of modernist poetic form was crucially bound to narratives of English national culture.

Meredith Martin is associate professor of English at Princeton University.

"[T]hrough her skillful close readings, Martin reveals a generation of war poets much more finely tuned to nationalist discourses of metre and their changing relationship to them than had been previously acknowledged."—Elizabeth Micakovic, Literature & History

"Martin's great accomplishment, done with impressive detail, panache, and style, is to reveal the ideological presuppositions, political desires, and personal needs of metrical practitioners and theorists in the culture and period that she examines."—Richard Cureton, Review of English Studies

"This book open[s] new horizons for historical poetics and prosody. . . . Martin's [work] is at once the most historically capacious work to date and the one that goes the farthest toward proving not only the utility of a historically attuned prosody for the study of poetry but the necessity of the field to both formalism and cultural studies."—Ben Glaser, Modern Language Quarterly

"This innovative book changes the prosodic landscape of modernism and Victorianism—it shows that rather than constituting a dramatic break with outworn Victorian metrics, modernist experiment is continuous with Victorian experiment. From Hopkins to Owen, and Bridges to Pound, this book's vital and many-sided topics stretch across World War I and come alive through meticulous writing."—Isobel Armstrong, University of London

"This book captures the ideological work to which meter was put between 1860 and 1930. Meter may seem removed from the themes of official national doctrine, but Martin shows meter's critical part in promoting educational schemes that claimed to discover national identity. Her account is not only a history of meter but also a description of its role in the advancement of history and poetry as school subjects. A stunningly insightful book."—Frances Ferguson, Johns Hopkins University

"The Rise and Fall of Meter brilliantly unsettles received accounts of Victorian, Edwardian, and Georgian verse culture, demonstrating how intricately and urgently prosody figured in the national and imperial imaginaries from the 1860s through WWI. It is essential reading for anyone seriously interested in the history, politics, and forms of modern poetry."—Jason David Hall, University of Exeter

"A genuinely exciting contribution to the history of English poetry and poetics, The Rise and Fall of Meter argues for a more complicated and ultimately more interesting narrative of the turn from Victorian to modern prosody. Meredith Martin's significant archival work and fastidious analyses teach us how to read poems we likely have never encountered, and to reread those that we have."—Jason R. Rudy, University of Maryland

"This incredibly accomplished book is one of the very finest cultural histories of English meter ever written. Unfailingly brilliant, it prompts us to revisit canonical poems with fresh eyes, creates a true understanding of how meter defined the role of poetry during World War I, and transforms our view of the literary history of the late Victorian and early modernist periods. An outstanding and phenomenal achievement."—Joseph Bristow, University of California, Los Angeles

"The Rise and Fall of Meter is a major contribution to the fields of Victorian and modern poetry, and to the burgeoning field of historical poetics. Thoroughly provocative, learned, and stimulating, it deploys a vast array of sources, many of them unknown until now. Because of this remarkably rich book, I will never teach or read Victorian poetry in the same way again."—Carolyn Williams, Rutgers University