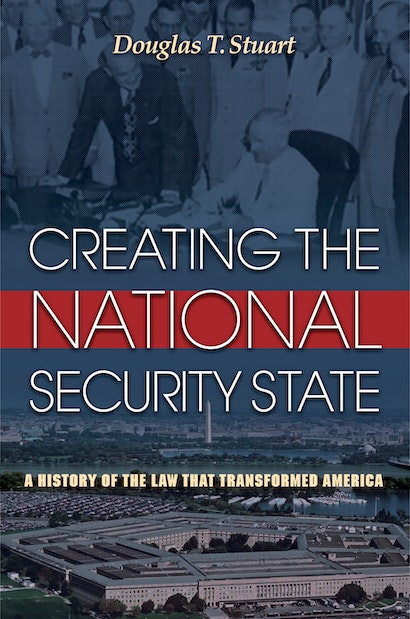 For the last sixty years, American foreign and defense policymaking has been dominated by a network of institutions created by one piece of legislation — the 1947 National Security Act. This is the definitive study of the intense political and bureaucratic struggles that surrounded the passage and initial implementation of the law. Focusing on the critical years from 1937 to 1960, Douglas Stuart shows how disputes over the lessons of Pearl Harbor and World War II informed the debates that culminated in the legislation, and how the new national security agencies were subsequently transformed by battles over missions, budgets, and influence during the early cold war.


Stuart provides an in-depth account of the fight over Truman’s plan for unification of the armed services, demonstrating how this dispute colored debates about institutional reform. He traces the rise of the Office of the Secretary of Defense, the transformation of the CIA, and the institutionalization of the National Security Council. He also illustrates how the development of this network of national security institutions resulted in the progressive marginalization of the State Department.


Stuart concludes with some insights that will be of value to anyone interested in the current debate over institutional reform.

Douglas T. Stuart holds the J. William Stuart and Helen D. Stuart Chair in International Studies at Dickinson College. He is also an adjunct professor at the U.S. Army War College. His books include The Limits of Alliance: NATO Out-of-Area Problems since 1949 and Organizing for National Security.

"This book provides a rich historical account of the creation and implementation of the National Security Act of 1947, which led to the rise of a national security bureaucracy within the executive branch. Stuart covers a wide range of political actors who shaped national security policy during the middle of the 20th century, including Ferdinand Eberstadt, George Marshall, and James Forrestal. . . . Scholars from many backgrounds will find this book to be informative."—A. L. Warber, Choice

"[T]he value in Creating the National Security State is the extensive analysis of the debates leading to the passage of the 1947 National Security Act and the fate of the act's institutional components."—Diane Putney, H-Net Reviews

"At a time when much talk of recasting the national security policies of Western countries, the United States for a start, as well as the institutions in charge of those policies, Douglas Stuart's book on the 1947 National Security Act is a timely contribution in that it lays the historical foundations for such a debate."—Francesco N. Moro, International Spectator

"In this lucid, carefully researched, and meticulously argued volume, Douglas Stuart revisits the founding legislation of cold war military and foreign policy. He explains how American thinking about national security was transformed and how the military establishment rose to such prominence in American life. Creating the National Security State is a major contribution—indispensable scholarship for historians, political scientists, and the policymaking community."—Richard H. Kohn, University of North Carolina, Chapel Hill

"This book is unique in demonstrating how ideas, bureaucratic politics, and raw political power interacted with a changing security environment to bring about the birth of the modern national security state. The essential insights and interests expressed by the major players during the 1945-53 period remain with us today, and we could all benefit from this history of experiment, wrong-headed choices, and triumph. Stuart writes with verve and is a master of the judiciously used anecdote."—John Garofano, United States Naval War College

"This is a deeply researched and compelling study of the development of the national-security state from the late 1930s through the late 1950s. This book makes a major contribution to many fields of history, political science, and sociology. It addresses some of the key debates about the nature of the cold war and its effects on American society."—Jeremi Suri, University of Wisconsin—Madison

"This is a first-rate examination of the origins of America's national-security establishment. The book is a significant contribution to the field, providing some excellent insights into why the United States ended up with the hodgepodge of security institutions that it has endured since 1947."—Loch K. Johnson, University of Georgia