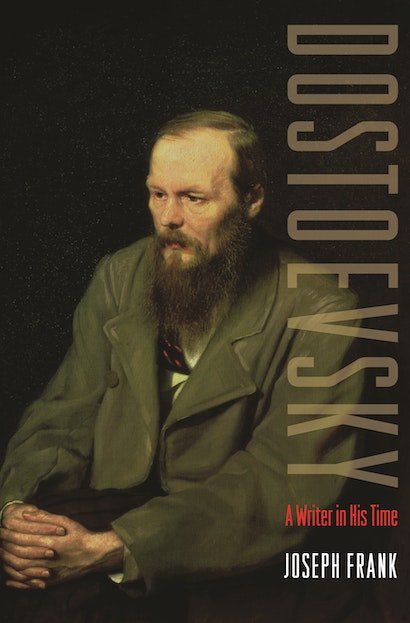 Joseph Frank’s award-winning, five-volume Dostoevsky is widely recognized as the best biography of the writer in any language—and one of the greatest literary biographies of the past half-century. Now Frank’s monumental, 2,500-page work has been skillfully abridged and condensed in this single, highly readable volume with a new preface by the author. Carefully preserving the original work’s acclaimed narrative style and combination of biography, intellectual history, and literary criticism, Dostoevsky: A Writer in His Time illuminates the writer’s works—from his first novel Poor Folk to Crime and Punishment and The Brothers Karamazov—by setting them in their personal, historical, and above all ideological context. More than a biography in the usual sense, this is a cultural history of nineteenth-century Russia, providing both a rich picture of the world in which Dostoevsky lived and a major reinterpretation of his life and work.

"A monumental achievement. . . This is not a literary biography in the usual sense of the term. . . . It is, rather, an exhaustive history of Dostoyevsky's mind, an encyclopedic account of the author as major novelist and thinker, essayist and editor, journalist and polemicist. . . . Wrought with tireless love and boundless ingenuity, it . . . [is] a multifaceted tribute from an erudite and penetrating cultural critic to one of the great masters of 19th-century fiction."—Michael Scammell, New York Times Book Review

"It is unquestionably the fullest, most nuanced and evenhanded—not to mention the most informative—account of its subject in any language, and it has significantly changed our understanding of both the man and his work."—Donald Fanger, Los Angeles Times Book Review

"In his aim of elucidating the setting within which Dostoevsky wrote—personal on the one hand, social, historical, cultural, literary, and philosophical on the other—Frank has succeeded triumphantly."—J. M. Coetzee, New York Review of Books

"Dostoevsky: A Writer in His Time thus immediately becomes the essential one-volume commentary on the intellectual dynamics and artistry of this great novelist's impassioned, idea-driven fiction. . . . To understand Dostoevsky's often savage satire or nightmarish visions or just the conversations among the Karamazov brothers, one needs to grasp not only the text but also the ideological context. To both of these there is no better guide than Joseph Frank."—Michael Dirda, Wall Street Journal

"The ideal one-volume biography of Dostoevsky could only come through a distillation of the much-acclaimed five-volume biography (1976-2002) by Joseph Frank. In compressing his longer work, editor Mary Petrusewicz tightens the rigor of a narrative that already departed from traditional biography by focusing chiefly on the ideas with which the Russian author wrestled so powerfully, providing the details of his personal life only as incidental background. Thus, for example, while readers do learn of formative incidents during Dostoevsky's four years in tsarist prison camp, what they see most clearly is how the prison experience deepened the author's faith in God while dampening his zeal for political reform. In a similar way, Frank limns only briefly the life experiences surrounding the writing of the major novels—Crime and Punishment, Demons, and Brothers Karamazov—devoting his scrutiny largely to how Dostoevsky develops the ideological tensions within each work. Readers consequently see, for instance, how Napoleonic illusions justify Raskolnikov's bloody crimes, how the Worship of Man dooms Kirillov to suicide, and how deep Christian faith enables Alyosha to resist Ivan's corrosive rationalism. Yet while probing Dostoevsky's themes, Frank also examines the artistry that gives them imaginative life, highlighting—for example—perspectival techniques that anticipate those of Woolf and Joyce. A masterful abridgement."—Bryce Christensen, Booklist

"It is wonderfully lucidly written and a marvellous portrait of the man behind the books."—Nadine Gordimer, Independent

"This extraordinary biography succeeds in making both irony and great ideas wholly alive, immediately accessible to us. It is a great work, both of scholarship and of art."—A. S. Byatt, Sunday Times

"A narrative of such compelling precision, thoroughness and insight as to give the reader a sense not just of acquaintanceship, but of complete identification with Dostoevsky, of looking through his eyes and understanding with his mind."—Helen Muchnic, Boston Globe

"Dostoevsky: A Writer in His Time at last offers non-specialist readers access to the definitive biography of an important figure in the history of the novel. . . . Patient, cautious, critical but not judgmental, using clear language and a chronologically ordered narrative structure, Frank neutralises the unreliable and hysterical self-constructions of which his subject was capable. The result is like watching an artist building an intricate, large-scale painting around a single figure. . . . Frank's great insight is that, just as no one aspect of Dostoevsky's complex personality can be separated from the others, no part of his writing—whether aesthetic, moral, religious or political—can be quarantined from the others. Frank's biography honours the polyphony of Dostoevsky's novelistic imagination: even in truncated form, it is a rare triumph."—Geordie Williamson, Australian

"Frank's monumental five-volume study of Dostoevsky deserves to be read, if only as an inspiring lesson about how much more thrilling a focus on ideas can be than the standard biography's obsession with the connections between creativity and the subject's personal life. The series has been condensed with incisive care and respect, giving those with limited time (and budget) a chance to engage with a revelatory vision of the Russian writer's enduring greatness."—Bill Marx, PRI's "The World"

"This is the Dostoevsky we encounter in Joseph Frank's superb Dostoevsky: A Writer in His Time, a one-volume, 984-page condensation of Frank's five-volume biography of the author, written over the course of a long and distinguished career. . . . Few biographers could muster the intelligence and imagination needed to capture all this in a single tome. We should be grateful for Joseph Frank."—Peter Savodnik, Commentary

"With the publication of Dostoevsky: A Writer in His Time earlier this year, a massive abridgement of five volumes written over three decades, Frank breaks once and for all with his early critic's stilted categories in portraying the human subject. His innovative method of biography, influenced heavily by literary criticism, starts with artistic expression and moves backward, seeking to carefully situate his subject within ideological context. . . . Without a doubt, the genius of Frank's form is in combining three modalities in crafting his narrative: literary criticism, social and intellectual history, and biography."—Aaron Stuvland, Politics and Culture

"Joseph Frank's magisterial five-volume biography of Dostoevsky—one of the exemplary achievements of our era—has invaluably been published in an abridged one-volume edition."—Jeff Simon, Buffalo News

"The depth of Frank's achievement is to put the writer and his work in social, political, ideological and historical context."—Jeff Baker, Oregonian

"Most of us spend much of our life trying to understand only a handful of people we know and love, in a span of time usually extending just three generations (from our parents to our children). Imagine, then, devoting your life to trying to make sense of one other person long dead, whom you had necessarily never met, with whom you may have nothing in common, and whose times and works must always seem elusive, encoded and frustratingly out of your reach. In a pursuit of that kind, Leon Edel trudged through five volumes on Henry James, Robert Caro is working away on his fourth installment of Lyndon Johnson's biography, and Edmund Morris is finalizing his third book on Teddy Roosevelt. Joseph Frank, though, trumps them all. After writing Feodor Dostoevsky's biography in five volumes, Frank and a gifted editor (Mary Petrusewicz) have now turned that massive, interminable endeavour into an abridged, accessible one-volume edition."—Mark Thomas, Canberra Times

"Joseph Frank, emeritus professor of Slavic and comparative literature at Stanford and Princeton universities, fully grasped the pressure of the political and religious issues seething in and around the visionary author to whom he dedicated his career. It took him five highly praised volumes and 26 years (1976-2002) to give a full account of Dostoevsky's life, works and times; this new, hefty condensation was done in collaboration with editor and Russian scholar Mary Petrusewicz, on condition that the original five volumes remain in print, available to anyone 'wishing for a wider horizon.' . . . Frank's magisterial homage deserves no less recognition."—Judith Armstrong, The Age

"Frank's five-volume biography has been called 'magisterial' and monumental,' as well as 'nuanced,' 'lucid' and 'penetrating.' The same might be said of this shorter version."—Marilyn McEntyre, Christian Century

"Frank's contribution to understanding Dostoevsky is no less than Dostoevsky's own gift to the world of literature."—Sarthak Shankar, Organiser

"Interspersed with others, it took me a while to read this altogether majestic book—but I'm so glad I did. [T]his tomb more than illuminates Dostoevsky's life vast array of brilliant writing."—David Marx, David Marx

"One of the greatest literary biographies ever written, Frank's five-volume account details the nearly unfathomable life and literary career of a writer who endured epilepsy and exile."—Jonathon Sturgeon, Flavorwire

"Although the pace has quickened, the serene and magnificent persistence that Joseph Frank brought to his five volumes resonates fully in this distilled story. If (as Frank tells us) Dostoevsky 'felt ideas,' then Frank 'feels biography' at any scale, with a perfect sense of proportion."—Caryl Emerson, Princeton University, author of The Cambridge Introduction to Russian Literature

"[This book] ensures Frank's status as the definitive literary biographer of one of the best fiction writers ever."—David Foster Wallace

"The editing and deep thought that have gone into this magnificent one-volume condensation of Frank's magnum opus are to be greatly admired. This is the best biography of Dostoevsky, the best reading of some of the major novels, the best cultural history of nineteenth-century Russia. Just the best."—Robin Feuer Miller, Brandeis University, author of Dostoevsky's Unfinished Journey