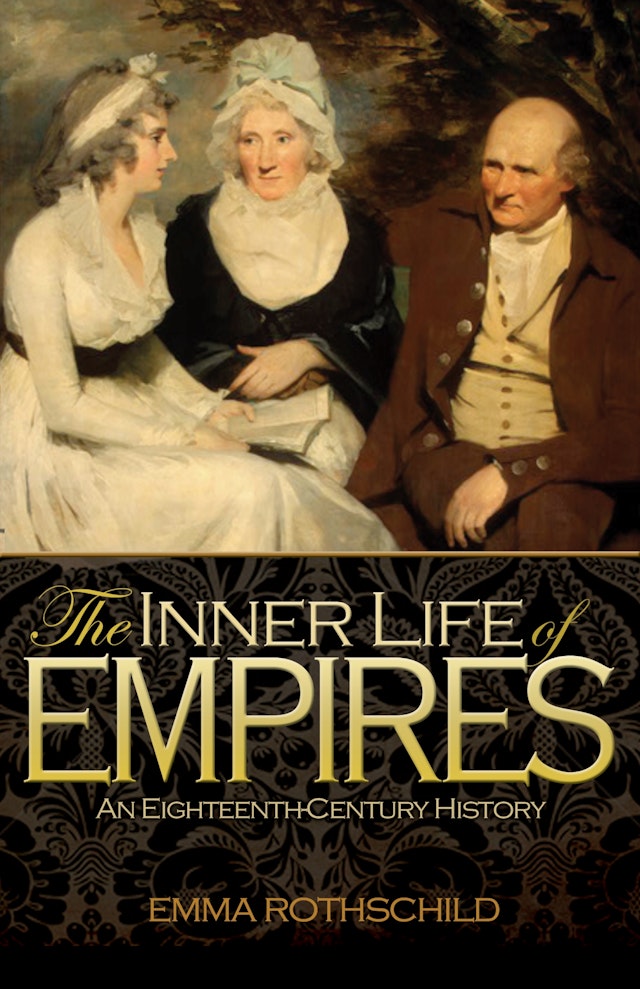 They were abolitionists, speculators, slave owners, government officials, and occasional politicians. They were observers of the anxieties and dramas of empire. And they were from one family. The Inner Life of Empires tells the intimate history of the Johnstones — four sisters and seven brothers who lived in Scotland and around the globe in the fast-changing eighteenth century. Piecing together their voyages, marriages, debts, and lawsuits, and examining their ideas, sentiments, and values, renowned historian Emma Rothschild illuminates a tumultuous period that created the modern economy, the British Empire, and the philosophical Enlightenment.


One of the sisters joined a rebel army, was imprisoned in Edinburgh Castle, and escaped in disguise in 1746. Her younger brother was a close friend of Adam Smith and David Hume. Another brother was fluent in Persian and Bengali, and married to a celebrated poet. He was the owner of a slave known only as “Bell or Belinda,” who journeyed from Calcutta to Virginia, was accused in Scotland of infanticide, and was the last person judged to be a slave by a court in the British isles. In Grenada, India, Jamaica, and Florida, the Johnstones embodied the connections between European, American, and Asian empires. Their family history offers insights into a time when distinctions between the public and private, home and overseas, and slavery and servitude were in constant flux.


Based on multiple archives, documents, and letters, The Inner Life of Empires looks at one family’s complex story to describe the origins of the modern political, economic, and intellectual world.

Emma Rothschild is the Jeremy and Jane Knowles Professor of History and director of the Joint Center for History and Economics at Harvard University, and a fellow of Magdalene College, University of Cambridge. She is the author of Economic Sentiments: Adam Smith, Condorcet, and the Enlightenment.

"The eleven Johnstone siblings of Westerhall, in Scotland, were 'a large and disorderly family,' whose lives, playing out on three continents between 1723 and 1813, illuminate what Rothschild calls an 'empire of intimate exchanges.' The subject is well chosen and provocatively explored."—New Yorker

"The book is the outcome of a remarkable archival discovery, of the kind of which every historian dreams. . . . The nature of her ambition is revealed by her title, The Inner Life of Empires. She wants to show us how the opening of the world to a family like the Johnstones affected their thoughts, sentiments, and behavior, and is anxious to recapture the day-to-day responses of people who had no idea, any more than we ourselves have, of how the story in which they found themselves caught up would end. Would the new republic of the United States survive? Nobody knew for certain. The range of sources she has consulted, the extraordinary wealth of detail she has unearthed about even the most obscure individuals, and the quite unexpected connections between them that she has uncovered fully support her claim. It is wonderfully appropriate that a book that gives us so many new and surprising insights into the new 'information society' of the eighteenth century should itself depend so heavily on new information technology, drawing, as Rothschild puts it, on 'a world of searchable databases and digitized archive catalogues.' In doing so, it presents what I suspect is a foretaste of a kind of history that will become increasingly common in the years to come, even if, as I fear, not all its practitioners will bring to it the historical imagination and sensitivity of Emma Rothschild."—New York Review of Books

"Ms. Rothschild's The Inner Life of Empires offers us a fascinating tour of Scottish society during the age of empire, and it does so from a unique perspective. Ms. Rothschild has written a "micro-history," a mode of scholarship that attempts to elucidate large historical themes by closely narrating the small history of a particular individual. Her micro-history is not about an individual but a family. The book is unusually well-researched and wide-ranging. . . . Ms. Rothschild has corralled this voluminous and scattered archival record with diligence and skill. She presents the Johnstones' family history as a portrait of their age. Books of this kind work by accumulating telling detail and so defy summary. Still, several themes emerge. Ms. Rothschild beautifully reveals, for instance, how fundamentally the imperial and military exploits of states can remake the imaginative and aspirational worlds of their subjects. The Johnstones could plan a career in the Caribbean, or gossip about the politics of the Mughal court in Delhi, in a manner that would have staggered their near forebears. The Inner Life of Empires reminds us that the experience of globalism long predates the age of the Internet. . . . More admirable still is Ms. Rothschild's meticulous and elegant account of the family. She offers us a captivating glimpse of what it must have been like to live in, profit from and command the British Empire during its heyday."—Jeffrey Collins, Wall Street Journal

"This original and remarkable book . . . is the story of the Johnstones, 11 Scottish siblings whose lives spanned the entire 18th-century British Empire—from Britain to Africa and the Americas. By extraordinary perseverance, Rothschild (a Harvard historian) has excavated the tiniest tidbits about them from a vast array of repositories and collections, and used these shards of evidence to broaden and deepen our understanding of the Enlightenment, commerce, empires, revolutions, nation states, sentiments, family relations, and slavery. Her tale often holds the mysteries of a fictional account, especially about a key slave whose life after shipment to the American colonies is lost in the mists of time. . . . While this is a scholarly work and the very model of the contemporary historian's craft, it's also deeply illuminating, humane, at times moving, and altogether captivating."—Publishers Weekly

"[An] elegantly crafted narrative. . . . The Inner Life of Empires . . . is a tour-de-force of archival sleuthing. It is also a triumph of historical ventriloquism. Speaking through the Johnstones, Rothschild delivers a wise, original reflection on the shifting boundaries between home and abroad, private and public, at the dawn of the modern age."—Maya Jasanoff, New Republic

"Emma Rothschild is an historian of the mind, of characteristic ways of thinking and feeling. She aims to blindfold hindsight and to recover not just external events but the way people perceived them at the time. The difficulty is evidence. Most people leave no trace. Even the eminent, she says, show little sign of the inner consequences of outward affairs. As if in answer, her absorbing new book, "The Inner Life of Empires", overflows with evidence—so finely detailed and from such scattered sources as to be scarcely imaginable before the development of digitized, searchable catalogues and archives."—The Economist

"This is a meticulous study, based on an immense amount of research, including a large cache of family correspondence, court records and much more. . . . There is much to admire about this book. It skillfully links the "microhistory" of the Johnson siblings with the "macrohistory" of Britain and its empire, giving us an intimate glimpse into the way one family pursued the material opportunities and confronted the moral challenges that arose with Britain's late-18th-century advance around the globe."—Dane Kennedy, Washington Independent Review of Books

"Here Emma Rothschild offers a truly transnational family history set in an age of turbulence, war and imperial growth; a moment in time where dramas were many. Rothschild's story of Empire, however, comes with a new spin, offering as it does a micro-historical account of one family's interconnections with the empires, politics and ideologies of the age. Drawing on many intensively mined sources from an array of archives, including a rich collection of family letters, she furnishes a richly detailed, highly readable account of the Johnstones, four sisters and seven brothers born into middling circumstances in Dumfries in the 1720s and 1730s. . . . The strength of this book lies in its focus on the family as a collective, for it is here that we see how Empire and individuals came together."—Donald MacRaild, Times Higher Education

"This is . . . a brave and able book."—Gillian Tindall, Literary Review

"Emma Rothschild's magnificently researched and lucidly written book reveals the many connections and layers of empire without in any way undermining the less edifying aspects of empire."—Rudrangshu Mukherjee, The Telegraph

"[A] wealth of insight into early capitalism and . . . the moral foundations of the global economy."—Diane C., Enlightened Economist

"Rothschild presents a fascinating combination of micro- and macro-history that sheds light on 18th century empires throughout the world. She does so by relying upon primary source documents of one family, the Johnstones, a relatively nonprosperous family of the Scottish country gentry. . . . [T]he approach provides a window on both personal and worldwide history that would be impossible otherwise."—Choice

"There is much wisdom and compassion in this gracefully written book."—Keith M. Baker, Law and History Review

"Rothschild is an accomplished scholar and a fluent writer. And her subject—teasing a broad study from a history of a single family—is both cleverly conceived and persuasively-argued. It is a tribute to indefatigable research, and it reflects the author's intellectual excitement about what she has unearthed."—James Walvin, Figurehead Historian

"[T]his work is an apt corrective to overly simplistic views of what eighteenth-century imperial Britons believed and felt."—Robert A. McLain, Historian

"The micro-history of the Johnstones . . . is a fascinating and informative account. . . . [S]ome of the best pages of this book illuminate the connections between principles, personal interests, and ideas in the political thought and in the politics of members of this family. Rothschild's sensitivity to these conflicts and tensions is admirable."—K. Steven Vincent, European Legacy

"The Inner Life of Empires is an excellent micro-history of one family's globe-spanning existence. . . . Rothschild illuminates a tumultuous period that created the modern economy, the British Empire, and the philosophical Enlightenment and will be an indispensible tool for contextualizing discussions of present-day globalization."—World Book Industry

"Rothschild wonderfully stirs politics, economics, family relationships, slavery, government, colonial life, and education into the same pot. Her work makes a convincing argument against separating concerns of public and private, economy and romance, politics and family. Her material may seem too comprehensive for one volume, but The Inner Life of Empires is very readable, almost novelistic in its integrated structure and fluid narrative."—Anna Lawrence, Journal of Modern History

"[A] Gem of a book. . . . Her book is a brilliant achievement in what the author identifies as the new microhistory and a sophisticated statement on the possibilities of this genre."—Mark Gamsa, Schweizerische Zeitschrift für Geschichte / Revue Suisse d'Histoire

"Tracing the lives of a single Scottish family whose eleven siblings roamed the globe to seek their fortunes, Emma Rothschild has explored the great elements of the eighteenth-century world: empire, politics, slavery, warfare, and Enlightenment thought and sensibility. An extraordinary book, weaving back and forth between microhistory and the greater world, it is based on archival research on three continents, written with literary grace, and inspired by a sensitive historical imagination."—Bernard Bailyn, Adams University Professor, emeritus, Harvard University

"Emma Rothschild presents a fascinating view of the ties of family, patronage, and business which linked the emerging British power across the world in the eighteenth century. Her book provides a valuable context for our contemporary discussions of globalization."—C. A. Bayly, University of Cambridge

"This remarkable book is both a moving evocation of an extended family's intimate experience of empire and Enlightenment in the eighteenth century, and a powerful meditation on the work of historical writing in the post-Enlightenment, postimperial present. Profound and strikingly original, this book will become a classic."—Robert Travers, Cornell University

"This is an important and original book. Based on a wealth of archival research—much of which has been neglected by previous historians—The Inner Life of Empires looks at the Johnstone family to explore issues of British imperialism. It makes a critical intervention in the history of intimacy and interiority, and poses a series of challenges to concepts of the public and private. A wonderful read."—Margot Finn, Warwick University