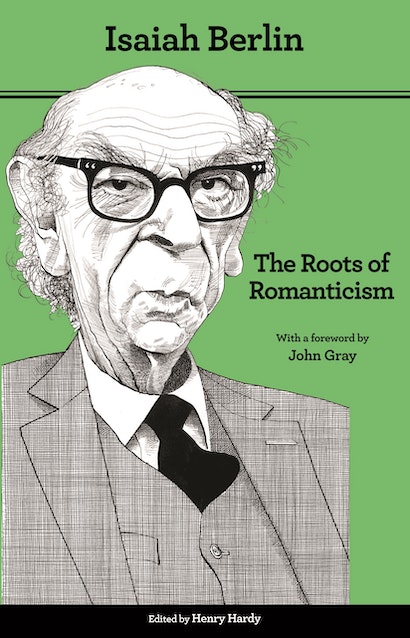 In The Roots of Romanticism, one of the twentieth century’s most influential philosophers dissects and assesses a movement that changed the course of history. Brilliant, fresh, immediate, and eloquent, these celebrated Mellon Lectures are a bravura intellectual performance. Isaiah Berlin surveys the many attempts to define romanticism, distills its essence, traces its developments from its first stirrings to its apotheosis, and shows how it still permeates our outlook. He ranges over a cast of some of the greatest thinkers and artists of the eighteenth and nineteenth centuries, including Kant, Rousseau, Diderot, Schiller, the Schlegels, Novalis, Goethe, Blake, Byron, and Beethoven. The ideas and attitudes of these and other figures, Berlin argues, helped to shape twentieth-century nationalism, existentialism, democracy, totalitarianism, and our ideas about heroic individuals, self-fulfillment, and the exalted place of art.

This new edition, illustrated for the first time, also features a new foreword by philosopher John Gray, in which he discusses Berlin’s belief that the influence of romanticism has been unpredictable and contradictory in the extreme, fuelling anti-liberal political movements but also reinvigorating liberalism; a revised text; and a new appendix that includes some of Berlin’s correspondence about the lectures and the reactions to them.

Isaiah Berlin (1909–1997) was one of the most important philosophers of the twentieth century. A Fellow of All Souls College, Oxford, he was renowned as an essayist and as the author of many books, among them Karl Marx, Four Essays on Liberty, Russian Thinkers, The Sense of Reality, The Proper Study of Mankind, and from Princeton, Concepts and Categories, Personal Impressions, The Crooked Timber of Humanity, The Roots of Romanticism, The Power of Ideas, and Three Critics of the Enlightenment. Henry Hardy, a Fellow of Wolfson College, Oxford, is one of Isaiah Berlin's literary trustees. He has edited several other volumes by Berlin, and is currently preparing Berlin's letters and remaining unpublished writings for publication.

"A fascinating intellectual history. . . . Berlin partakes in a kind of victory celebration, an often breathless study of the movement that ended the hegemony of the rationalist tradition."—Douglas A. Sylva, New York Times Book Review

"Berlin at his best: quick-minded, erudite, witty and profound, and, above all, exciting. To read this book is to feel the force of living thought coming white-hot from the forge of a superb mind."—John Banville, Irish Times

"[A] supremely intelligent and illuminating little book. . . . [A] marvelous example of Berlin doing what he did best—the judiciously poised and open-minded elucidation of 18th- and 19th-century philosophy. . . . Berlin's writing shines like a beacon."—Rupert Christiansen, The Spectator

"This is a book that would be as salutary a read for prime ministers and presidents as for those who see themselves as cultural critics. Berlin's writing exemplifies the need for understanding and tolerance in the face of the plurality of human needs and aspirations, and the incompatibility of human ideals."—Peter Mudford, Times Higher Education Supplement

"This small volume provides the distilled essence of Berlin."—Anthony Smith, The Observer

"A superlatively readable and absorbing primer. . . . As Berlin unfolds [Romanticism's] development, politics and art as we know them become more comprehensible than ever before."—Booklist

"Here is Berlin doing what everyone said he did best: talk. . . . Berlin remains the tactful guest, discerning liberalism, toleration, decency and the appreciation of the imperfections of life also among the romantic movement's legacies. . . . Berlin liked to remind people that when they most believe they know where they are going, that is when they are likeliest to be wrong."—Colin Walters, Washington Times

"The publication of the second edition of Isaiah Berlin's The Roots of Romanticism is a welcome event. . . . [It] is one of a handful of extant books capable of tracing the beginnings, illuminating some of the many manifestations, and identifying the diverse afterlives of that fruitful and inspired ideal in the history of human creativity which has come to be known as Romanticism."—Michael J. Neth, European Legacy

"An excellent resource for both beginning researcher and seasoned scholar."—Library Journal

"Isaiah Berlin's Mellon Lectures on romanticism, a movement that he believed to be 'the greatest single shift in the consciousness of the West to have occurred,' are as eloquent, sprightly, and profound as anything he ever produced. This edition is provided with fascinating addenda as well as exacting editing and full references; it presents Berlin's analysis of the contradictions, plurality, and irrationality of a vital conjunction in intellectual, political, and artistic history, and restores the voice of the magus at its most thought-provoking and beguiling."—Roy Foster, University of Oxford

"This book provides an excellent account of the topics that were to preoccupy Berlin throughout his life. . . . It is a history of ideas, wonderfully under control, always with the sense of how those ideas have impacted on other ideas and eventually on the contemporary period."—Tracy B. Strong, University of California, San Diego