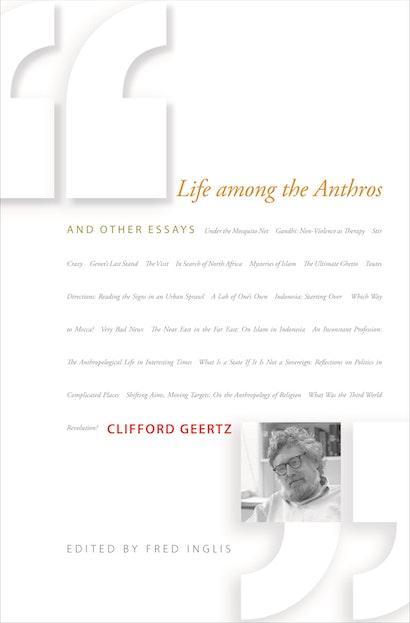 Clifford Geertz (1926–2006) was perhaps the most influential anthropologist of our time, but his influence extended far beyond his field to encompass all facets of contemporary life. Nowhere were his gifts for directness, humor, and steady revelation more evident than in the pages of the New York Review of Books, where for nearly four decades he shared his acute vision of the world in all its peculiarity. This book brings together the finest of Geertz’s review essays from the New York Review along with a representative selection of later pieces written at the height of his powers, some that first appeared in periodicals such as Dissent, others never before published.

This collection exemplifies Geertz’s extraordinary range of concerns, beginning with his first essay for the Review in 1967, in which he reviews, with muffled hilarity, the anthropologist Bronislaw Malinowski. This book includes Geertz’s unflinching meditations on Western academia’s encounters with the non-Western world, and on the shifting and clashing places of societies in the world generally. Geertz writes eloquently and arrestingly about such major figures as Gandhi, Foucault, and Genet, and on topics as varied as Islam, globalization, feminism, and the failings of nationalism.

Life among the Anthros and Other Essays demonstrates Geertz’s uncommon wisdom and consistently keen and hopeful humor, confirming his status as one of our most important and enduring public intellectuals.

"Although some are suspicious of collections of published work, part of the power of this volume is its time-capsule quality. It is precisely because we know what comes thereafter that adds drama to witnessing Geertz measure new ideas in real time. . . . You can justify reading this book on the grounds of learning from the intoxicating analysis, all the while covertly enjoying the razor-wire writing."—Timothy Larsen, Books & Culture

"Life among the Anthros . . . should not be left unread for anyone who wants to see the critical mind of Geertz at play."—Daniel Martin Varisco, Contemporary Islam

"Inglis has successfully curated a volume of essays that does not only remind us of the depth and breadth of material that Geertz covered in his prolific scholarly life, but it also illustrates the ways that good humor, open-mindedness, and unapologetic fascination regarding the behavior of the human animal can facilitate the presentation of scholarly discourse to more popular audiences. . . . An eclectic collection of essays."—Sarah Gordon, Journal of Folklore Research

"This stunning collection—drawn from his earliest reviews to his latest lectures—brings us Clifford Geertz's stilled voice, commenting on the great intellectual and political movements and figures of our time and his own adventures as an anthropologist. Humorous, frank, and wise, with easy access to events and learning all over the world, Geertz urges us to observe and compare difference rather than construct grand schemes. Life among the Anthros and Other Essays is a copious gift to us as we try to understand the uncertainties of the past and prepare for the surprises of the future."—Natalie Zemon Davis, author of Trickster Travels: A Sixteenth-Century Muslim between Worlds

"To read this collection is to be reminded how much we have learned from Clifford Geertz, this trailblazer in cultural anthropology and interpretive social science. Two of the great qualities that made him a mentor in this field shine forth in this book: his constant awareness of the near-impossibility of the task of understanding the other without distortion, and the wide and humane sympathies that made him so often succeed in this very task."—Charles Taylor, McGill University

"A much needed collection. Its core is an excellent, judicious selection of Geertz's essays in the New York Review of Books over more than three decades, plus other key articles that he published elsewhere. This is a remarkable retrospective on Geertz that is not available elsewhere and that captures his public intellectual role acutely and poignantly."—George Marcus, University of California, Irvine