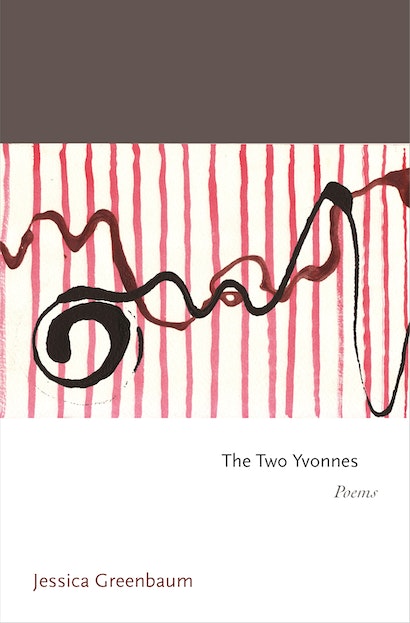 This is the second collection from a Brooklyn poet whose work many readers will know from the New Yorker. Jessica Greenbaum’s narrative poems, in which objects and metaphor share highest honors, attempt revelation through close observation of the everyday. Written in “plain American that cats and dogs can read,” as Marianne Moore phrased it, these contemporary lyrics bring forward the challenges of Wisława Szymborska, the reportage of Yehuda Amichai, and the formal forays of Marilyn Hacker. The book asks at heart: how does life present itself to us, and how do we create value from our delights and losses? Riding on Kenneth Koch’s instruction to “find one true feeling and hang on,” The Two Yvonnes overtakes the present with candor, meditation, and the classic aspiration to shape lyric into a lasting force.

Moving from 1960s Long Island, to 1980s Houston, to today’s Brooklyn, the poems range in subject from the pages of the Talmud to a squirrel trapped in a kitchen. One tells the story of young lovers “warmed by the rays / Their pelvic bones sent over the horizon of their belts,” while another describes the Bronx Zoo in winter, where the giraffes pad about “like nurses walking quietly / outside a sick room.” Another poem defines the speaker via a “packing slip” of her parts — “brown eyes, brown hair, from hirsute tribes in Poland and Russia.” The title poem, in which the speaker and friends stumble through a series of flawed memories about each other, unearths the human vulnerabilities that shape so much of the collection.

From The Two Yvonnes:
WHEN MY DAUGHTER GOT SICK

Her cries impersonated all the world;
The fountain’s bubbling speech was just a trick
But still I turned and looked, as she implored,
Or leaned toward muffled noises through the bricks:
Just radio, whose waves might be her wav-
ering, whose pitch might be her quavering,
I turned toward, where, the sirens might be “Save

Me,” “Help me,” “Mommy, Mommy”—everything
She, too, had said, since sloughing off the world.
She took to bed, and now her voice stays fused
To air like outlines of a bygone girl;
The streets, the lake, the room—just places bruised
Without her form, the way your sheets still hold
Rough echoes of the risen sleeper, cold.

Jessica Greenbaum is the author of the award-winning poetry collection Inventing Difficulty. Her poems and essays have appeared in the New Yorker, the Nation, Poetry, Southwest Review, and elsewhere. She is the poetry editor of upstreet. 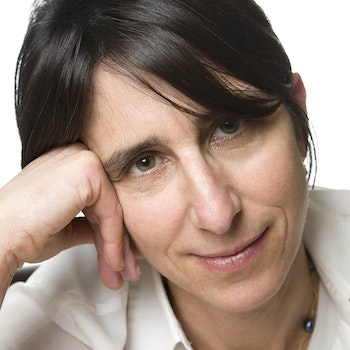 "[Greenbaum's] great intelligence, skill with abstraction, humor, and talent for endings raise her poems far above the mundane."—Publishers Weekly

"Greenbaum's work, written in the everyday patois of urban Americans, has been characterized as edgy and idiosyncratic, localized and wry, and she's earned comparisons to Whitman and Hart Crane for her lyrical familiarity with the Williamsburg section of Brooklyn and environs. . . . Greenbaum's storyteller is not just interesting, but interested, and invested, in the world. Be it a kibbutz outside Tel Aviv, or Texas in the twentieth century, hers is a truly cosmopolitan perspective, refreshing and unique, but now practiced and increasingly refined."—Diego Báez, Booklist

"While Greenbaum finds it 'odd that just one key / let me in my front door / and into my life every day,' her fluidly, even propulsively written second collection is itself a splendid key to everyday experience."—Barbara Hoffert, Library Journal

"Readers can be grateful that the poems collected in The Two Yvonnes are between covers at last. In it we find Greenbaum, in her clear, Brooklyn vernacular—usually in the first person—exploring the preoccupations of Inventing Difficulty: issues of story and history, of the places that we inhabit and those that inhabit us, especially the specular urban turf of the city."—Lisa Russ Spaar, Los Angeles Review of Books

"Greenbaum's achievement rests in her superb control of form and tone, her quirky, self-deprecating Jewish humor, and, when required, the quiet restraint that bespeaks great feeling."—Robin Becker, Women's Review of Books

"In these autobiographical poems, Greenbaum maintains a light touch and keeps the focus steadily away from psychological theorizing about who did what to whom. She stays resolutely rooted in the down-to-earth, the comic, the commonsensical, and the moral, while not evading the sad and grievous. Greenbaum's poems are domestic and communal, buttressed by a sustaining network of allegiances and loyalties among a circle of friends and family. . . . Greenbaum's subjects may be quotidian, but a handful of poems have an originality and insight that moved me."—Zara Raab, Verse Wisconsin