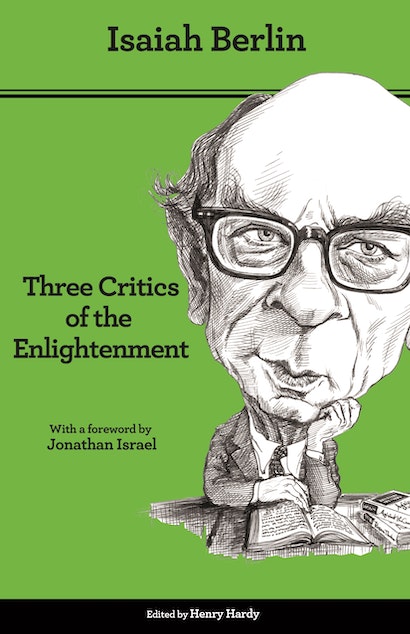 Isaiah Berlin was deeply admired during his life, but his full contribution was perhaps underestimated because of his preference for the long essay form. The efforts of Henry Hardy to edit Berlin’s work and reintroduce it to a broad, eager readership have gone far to remedy this. Now, Princeton is pleased to return to print, under one cover, Berlin’s essays on these celebrated and captivating intellectual portraits: Vico, Hamann, and Herder. These essays on three relatively uncelebrated thinkers are not marginal ruminations, but rather among Berlin’s most important studies in the history of ideas. They are integral to his central project: the critical recovery of the ideas of the Counter-Enlightenment and the explanation of its appeal and consequences — both positive and (often) tragic.


Giambattista Vico was the anachronistic and impoverished Neapolitan philosopher sometimes credited with founding the human sciences. He opposed Enlightenment methods as cold and fallacious. J. G. Hamann was a pious, cranky dilettante in a peripheral German city. But he was brilliant enough to gain the audience of Kant, Goethe, and Moses Mendelssohn. In Hamann’s chaotic and long-ignored writings, Berlin finds the first strong attack on Enlightenment rationalism and a wholly original source of the coming swell of romanticism. Johann Gottfried Herder, the progenitor of populism and European nationalism, rejected universalism and rationalism but championed cultural pluralism.


Individually, these fascinating intellectual biographies reveal Berlin’s own great intelligence, learning, and generosity, as well as the passionate genius of his subjects. Together, they constitute an arresting interpretation of romanticism’s precursors. In Hamann’s railings and the more considered writings of Vico and Herder, Berlin finds critics of the Enlightenment worthy of our careful attention. But he identifies much that is misguided in their rejection of universal values, rationalism, and science. With his customary emphasis on the frightening power of ideas, Berlin traces much of the next centuries’ irrationalism and suffering to the historicism and particularism they advocated. What Berlin has to say about these long-dead thinkers — in appreciation and dissent — is remarkably timely in a day when Enlightenment beliefs are being challenged not just by academics but by politicians and by powerful nationalist and fundamentalist movements.


This new edition includes a number of previously uncollected pieces on Vico and Herder, two interesting passages excluded from the first edition of the essay on Hamann, and Berlin’s thoughtful responses to two reviewers of that same edition.

"Isaiah Berlin's main preoccupation was to understand the modern reaction against the Enlightenment. These essays on Counter-Enlightenment thinkers are classics and also illuminate his own ideas about the place of reason in politics. An essential volume."—Mark Lilla, Columbia University

"Isaiah Berlin is among the finest intellectual historians of recent decades. Yet his position is somewhat peculiar: for while he is clearly a scholar of enormous erudition, the characteristic style of his work is closer to that of brilliant conversation than of conventional historical scholarship. His works on Vico, Herder, and Hamann deal with thinkers who were at odds with main currents of the Enlightenment. For anyone with a historical sense, the recrudescence of so many of the characteristic notions of the 'Counter-Enlightenment' under the rubric of 'postmodernism' is striking. The recovery of these ideas is all the more effective for being a critical one: Berlin reminds his readers of some of the unfortunate historical consequences of the ideas in question."—Jerry Z. Muller, Catholic University of America

"Isaiah Berlin's main preoccupation throughout his productive life was understand the nature of the modern reaction against the Enlightenment. These essays on Vico, Herder, and Hamann belong with his other profound and influential studies of the leading figures of what he called the Counter-Enlightenment. But they are also crucial for anyone hoping to understand Berlin's own analysis of modern life and politics, which has received increasing attention in recent years. Anyone interested in Berlin or those he studied will find this an essential volume."—Mark Lilla, University of Chicago