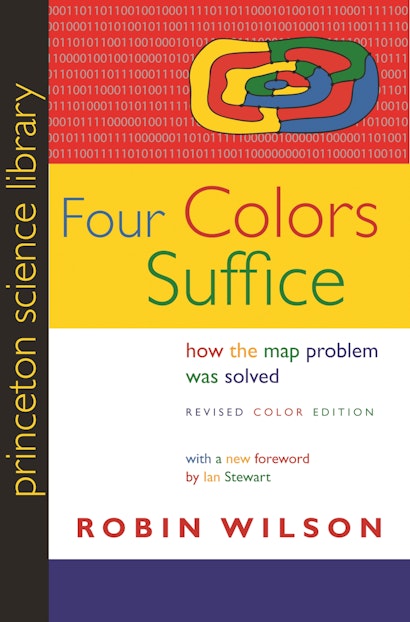 On October 23, 1852, Professor Augustus De Morgan wrote a letter to a colleague, unaware that he was launching one of the most famous mathematical conundrums in history — one that would confound thousands of puzzlers for more than a century. This is the amazing story of how the “map problem” was solved.


The problem posed in the letter came from a former student: What is the least possible number of colors needed to fill in any map (real or invented) so that neighboring counties are always colored differently? This deceptively simple question was of minimal interest to cartographers, who saw little need to limit how many colors they used. But the problem set off a frenzy among professional mathematicians and amateur problem solvers, among them Lewis Carroll, an astronomer, a botanist, an obsessive golfer, the Bishop of London, a man who set his watch only once a year, a California traffic cop, and a bridegroom who spent his honeymoon coloring maps. In their pursuit of the solution, mathematicians painted maps on doughnuts and horseshoes and played with patterned soccer balls and the great rhombicuboctahedron.


It would be more than one hundred years (and countless colored maps) later before the result was finally established. Even then, difficult questions remained, and the intricate solution — which involved no fewer than 1,200 hours of computer time — was greeted with as much dismay as enthusiasm.


Providing a clear and elegant explanation of the problem and the proof, Robin Wilson tells how a seemingly innocuous question baffled great minds and stimulated exciting mathematics with far-flung applications. This is the entertaining story of those who failed to prove, and those who ultimately did prove, that four colors do indeed suffice to color any map.


This new edition features many color illustrations. It also includes a new foreword by Ian Stewart on the importance of the map problem and how it was solved.

Robin Wilson is emeritus professor of pure mathematics at the Open University and emeritus professor of geometry at Gresham College, London. He has written and edited many books on topics ranging from graph theory and combinatorics, via sudoku, philately, and the Gilbert and Sullivan operas, to the history of mathematics. He is currently president of the British Society for the History of Mathematics.

"The simplicity of the four-color conjecture is deceptive. Just how deceptive is made clear by Robin Wilson's delightful history of the quest to resolve it. . . . Four Colors Suffice is strewn with good anecdotes, and the author . . . proves himself skillful at making the mathematics accessible."—Jim Holt, New York Review of Books

"Wilson's lucid history weaves together lively anecdotes, biographical sketches, and a non-technical account of the mathematics."—Science

"Earlier books . . . relate some of the relevant history in their introductions, but they are primarily technical. In contrast, Four Colors Suffice is a blend of history anecdotes and mathematics. Mathematical arguments are presented in a clear, colloquial style, which flows gracefully."—Daniel S. Silver, American Scientist

"Robin Wilson appeals to the mathematical novice with an unassuming lucidity. It's thrilling to see great mathematicians fall for seductively simple proofs, then stumble on equally simple counter-examples. Or swallow their pride."—Jascha Hoffman, The Boston Globe

"A thoroughly accessible history of attempts to prove the four-color theorem. Wilson defines the problem and explains some of the methods used by those trying to solve it. His descriptions of the contributions made by dozens of dedicated, and often eccentric, mathematicians give a fascinating insight into how mathematics moves forward, and how approaches have changed over the past 50 years. . . . It's comforting to know that however indispensable computers become, there will always be a place for the delightfully eccentric mathematical mind. Let's hope that Robin Wilson continues to write about them."—Elizabeth Sourbut, New Scientist

"An attractive and well-written account of the solution of the Four Color Problem. . . . It tells in simple terms an exciting story. It . . . give[s] the reader a view into the world of mathematicians, their ideas and methods, discussions, competitions, and ways of collaboration. As such it is warmly recommended."—Bjarne Toft, Notices of the American Mathematical Society

"Recreational mathematicians will find Wilson's history of the conjecture an approachable mix of its technical and human aspects. . . . Wilson explains all with exemplary clarity and an accent on the eccentricities of the characters."—Booklist

"Wilson provides a lively narrative and good, easy-to-read arguments showing not only some of the victories but the defeats as well. . . . Even those with only a mild interest in coloring problems or graphs or topology will have fun reading this book. . . . [It is] entertaining, erudite and loaded with anecdotes."—G.L. Alexanderson, MAA Online

"I loved Robin Wilson's book on the four color problem, because it gives the history as well as the arguments. The history is presented so entertainingly, and the arguments so lucidly, that I'm sure the book will find a large audience, and delight any audience as much as it did me."—John Conway

"An intriguing historical account of one of the most baffling enigmas in mathematics: the Four Color Theorem. Robin Wilson provides fascinating insights into how mathematicians think, and shows that questions that are simple to ask may not be simple to answer."—Ian Stewart

"Robin Wilson has combined a complete history of the approach that led to the solution of the four color problem with a description of the techniques involved that can be read with pleasure and comprehension by undergraduates as well as professional mathematicians."—Kenneth Appel, University of New Hampshire