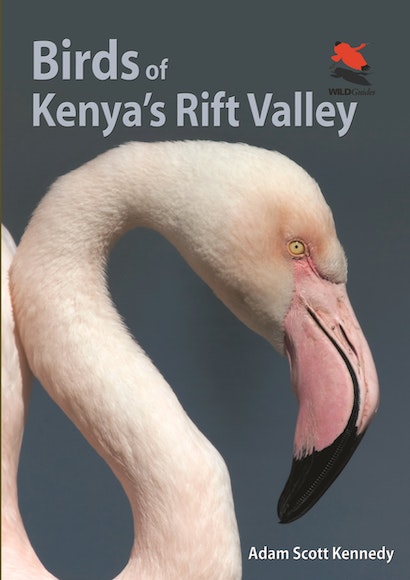 Kenya’s Rift Valley includes four major national parks — Lake Nakuru, Lake Bogoria, Mount Longonot, and Hell’s Gate — as well as many smaller areas that are outstanding for wildlife. Birds of Kenya’s Rift Valley features the 320 bird species that are most likely to be encountered on safari in this world-famous region, which runs from Lake Baringo in the north to Lake Magadi in the south. Featuring over 500 stunning color photos, this beautiful guide breaks new ground with its eye-catching layout and easy-to-use format. The book follows a habitat-based approach and provides interesting information about the ecology and behaviors of each species. Birds of Kenya’s Rift Valley avoids technical jargon in the species descriptions, which makes the guide easily accessible to anyone. With it, you will be identifying birds in no time.

Adam Scott Kennedy has served as principal leader on birding holidays in Africa, South America, Europe, and New Zealand. With his wife, Vicki, he currently operates as a private safari guide, specializing in photographic and wildlife safaris in East Africa. Information on their tours and stock image library can be found at www.rawnaturephoto.com. He is the author of Birds of the Masai Mara (Princeton WILDGuides).

"I wish I had the opportunity to have this book in my bag on my trip to this bird paradise some years ago. It would certainly have made identification much easier. The layout of the photographic guide is so helpful."—Derek Moore, Derek Bird Brain

"Ideal for the traveler on safari visiting the Rift Valley's national parks, such as Lake Nakuru, Lake Bogoria, Mount Longonot, and Hell's Gate. The value of a book like the Birds of Kenya's Rift Valley is that it lends itself to easy interpretation and use by those who are interested in birdwatching, those who are interested in conservation, and those who care about biodiversity in general."—Gabriel Thoumi, Mongabay.com

"Kennedy's new book would serve most safari goers well in Kenya's Rift Valley, and its great photos make it a worthy addition to any birder's bookshelf."—Robert F. Foster, Canadian Field-Naturalist

"Superb layout . . . Both books have a thoroughly modern feel about them, thanks to the wizards of the WILDGuides production team . . . Those for whom these books are really intended will find their visits to these bird-rich regions hugely enhanced."—Martin Kelsey, IBIS, Journal of the British Ornithologists' Union

"The friendly text is supported by a superb layout: hundreds of excellent photographs with great use of background tones means that colour leaps out of each page, yet the blocks of text are masterfully visible and easy to read."—Martin Kelsey, IBIS