A political history of the most famous desegregation crisis in America 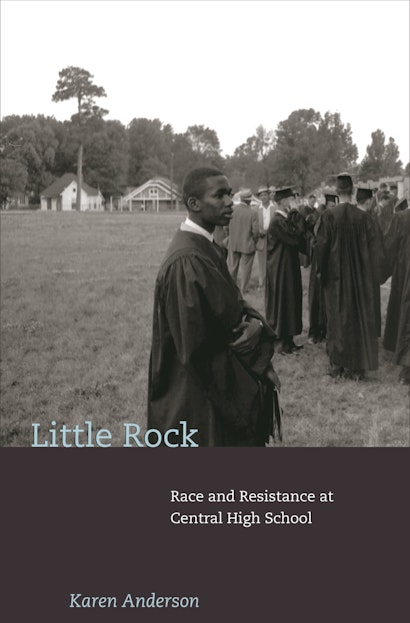 The desegregation crisis in Little Rock is a landmark of American history: on September 4, 1957, after the Supreme Court struck down racial segregation in public schools, Arkansas Governor Orval Faubus called up the National Guard to surround Little Rock Central High School, preventing black students from going in. On September 25, 1957, nine black students, escorted by federal troops, gained entrance. With grace and depth, Little Rock provides fresh perspectives on the individuals, especially the activists and policymakers, involved in these dramatic events. Looking at a wide variety of evidence and sources, Karen Anderson examines American racial politics in relation to changes in youth culture, sexuality, gender relations, and economics, and she locates the conflicts of Little Rock within the larger political and historical context.

Anderson considers how white groups at the time, including middle class women and the working class, shaped American race and class relations. She documents white women’s political mobilizations and, exploring political resentments, sexual fears, and religious affiliations, illuminates the reasons behind segregationists’ missteps and blunders. Anderson explains how the business elite in Little Rock retained power in the face of opposition, and identifies the moral failures of business leaders and moderates who sought the appearance of federal compliance rather than actual racial justice, leaving behind a legacy of white flight, poor urban schools, and institutional racism.

Probing the conflicts of school desegregation in the mid-century South, Little Rock casts new light on connections between social inequality and the culture wars of modern America.

Karen Anderson is professor emeritus of history at the University of Arizona. She is the author of Wartime Women: Sex Roles, Family Relations, and the Status of Women During World War II and coauthor of Present Tense: The United States since 1945.

"The author applies class and gender perspectives to enhance understanding of the roles women played in the crisis, especially the Mothers' League of Central High School and the Women's Emergency Committee to Open Our Schools. Anderson's book belongs in every college, university, and public library."—Choice

"Karen Anderson's Little Rock is recommended for its acute examination of race and gender issues in the South in the 1950s."—Oscar R. Williams, Journal of African American History

"Little Rock is based on research in a wide variety of sources, from manuscript archives and newspapers to organizational and school records and oral histories, as well as the vast secondary literature on this topic. The result is a well-written account of an important battle in the struggle for racial equality in the United States. Scholars of civil rights, politics, and law in the United States will find this work worthwhile and enjoyable."—Brian J. Daugherity, Journal of Southern History

"Little Rock contributes much to our understanding of southern American desegregation. . . . By acknowledging the connections between multifarious oppressions, Little Rock usefully contextualizes what could otherwise be taken for granted as only a story about race without downplaying the obvious racially based elements of conflict surrounding educational integration."—Steven L. Foy, European Legacy

"[T]his volume brilliantly details the moral shortfalls of people who sought 'the appearance of federal compliance rather than actual racial justice, leaving behind a legacy of white flight, poor urban schools, and institutional racism.'"—Ruth Tait, Ethnicity and Race in a Changing World

"Telling the fascinating story of the Little Rock crisis in wonderful detail, this book mines newspapers, personal papers, memoirs, interviews, and more, for the background behind the headlines. The interweaving of many perspectives allows readers to see this story as fluid rather than static: Anderson tracks the progress and backtracking, the ambivalence of southern moderates, the development of political networks, as well as the gains and losses. This is an important story."—Cheryl Greenberg, Trinity College

"This book takes as its subject one of the seminal chapters in the history of the modern civil rights movement, the struggle to integrate the public schools of Little Rock, Arkansas. Filled with fascinating characters, it is a story replete with drama and quiet triumph."—Jerald E. Podair, Lawrence University