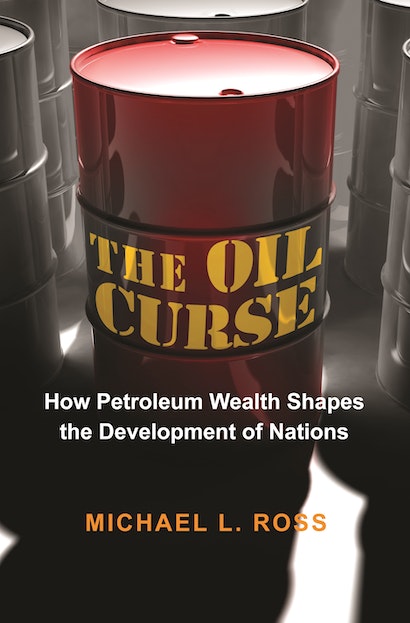 Countries that are rich in petroleum have less democracy, less economic stability, and more frequent civil wars than countries without oil. What explains this oil curse? And can it be fixed? In this groundbreaking analysis, Michael L. Ross looks at how developing nations are shaped by their mineral wealth—and how they can turn oil from a curse into a blessing.

Ross traces the oil curse to the upheaval of the 1970s, when oil prices soared and governments across the developing world seized control of their countries’ oil industries. Before nationalization, the oil-rich countries looked much like the rest of the world; today, they are 50 percent more likely to be ruled by autocrats—and twice as likely to descend into civil war—than countries without oil.

The Oil Curse shows why oil wealth typically creates less economic growth than it should; why it produces jobs for men but not women; and why it creates more problems in poor states than in rich ones. It also warns that the global thirst for petroleum is causing companies to drill in increasingly poor nations, which could further spread the oil curse.

This landmark book explains why good geology often leads to bad governance, and how this can be changed.

Michael L. Ross is professor of political science and director of the Center for Southeast Asian Studies at the University of California, Los Angeles. He has published widely on the politics of resource-rich countries and served on advisory boards for the World Bank, the Revenue Watch Institute, and the Natural Resource Charter. His work has appeared in Foreign Affairs, Foreign Policy, and the New York Times, and has been featured in the Washington Post, Newsweek, and many other publications. In 2009, he received the Heinz Eulau Award from the American Political Science Association.

"Economists have mostly shied away from full costings of the ecological and social devastation of oil use. Were they to do so with thoroughness and authority displayed by Ross in The Oil Curse, they might start to develop the new economic model for oil and other extractive industries that is so desperately needed."—John Vidal, Nature

"[P]articularly timely. . . . Ross has an easy style and his central points are made clearly."—Ed Crooks, Financial Times

"The Oil Curse leads us into the hidden world of the oil business. It presents some surprising discoveries and provides important information in a very accessible way. It is the most up-to-date book on a timely and important topic."—Lisa Kaaki, Arab News

"Ross [is] to be applauded for advancing the conversation beyond reveling in the history of human extraction of resources to expressing sorrow for the negative impacts of mineral rushes, which most social science books in this genre tend to follow. . . . Cautionary narratives such as th[is] . . . are important for engineers and chemists to read to further hasten the search for solutions to resource scarcity dilemmas."—Saleem H. Ali, Chemical & Engineering News

"Much has been written about the topic of how oil wealth hampers economic development as well as the building of institutions, but this book will help introduce a much wider audience to this issue. Ross has produced a comprehensive examination of the oil curse, analyzing data from 170 countries. . . . [T]his is a valuable and accessible study of an important topic."—Choice

"Michael Ross is an eminent political scientist, who distinguishes himself even further with this book. . . . Ross's book is readable, and provides substance and nuance to the basic underlying story that resource revenues are hard to manage."—Mark Henstridge, Business Economist

"His study is nuanced, well documented and precise: he avoids the lure of statistical analysis where a huge database can lead to clichés and easy conclusions. Instead, his statistical analysis is always backed by qualitative comparative analysis. Ross successfully demonstrates what the 'oil curse' means, without falling into the trap of determinism. Instead, he offers alternatives. Oil exporting countries, and mainly oil exporters, should act upon them: with adequate policies, the oil curse can be reversed."—J.M., Global Journal

"The Oil Curse is a landmark book that brings together explanations about the impacts of oil on various key issues from authoritarianism to patriarchy, from conflict to development. It combines qualitative and quantitative methods in a truly interdisciplinary tour de force of political, economic, and social analyses. The book is an excellent source for policy makers as well as scholars of various disciplines, especially Middle East studies."—Ahmet T. Kuru, Insight Turkey

"Ross' book is a useful and very clearly written corrective to sonic of the more ambitious claims about the influence of oil that can be found in the literature. This book is a good and accessible guide to the oil curse thesis."—Neil Robinson, Political Studies Review

"This book is highly recommended to scholars of development studies and Middle Eastern Studies, in particular, researchers and students who, like this reviewer, share a passion for studying oil."—Ramin Nassehi, LSE Review of Books

"A comprehensive and balanced look at the issue of the resource curse from perspectives of both economics and political science."—Anne Walker, Review of Regional Studies

"The Oil Curse is the best and most thorough examination that we have of the causes and consequences of oil wealth for poorly governed states. Oil revenues are massive, opaque, and volatile; they destroy the relationship between a state and its own citizens. Ross substantiates some of the common assertions about oil wealth, finds that others are incorrect, and offers some surprising discoveries. Very worth reading."—Stephen D. Krasner, Stanford University

"This important book brings new and timely insight into a key global phenomenon. High oil prices have triggered oil strikes concentrated in the poorest countries—the bottom billion. Will this time be different? Will oil drive transformation or cause a repeat of the history of plunder? Ross presents new research in an accessible style. Read it: understanding is the foundation for change."—Paul Collier, author of The Bottom Billion

"This is a masterful book. It provides a balanced and thoughtful overview of the wide variety of issues surrounding the politics of oil while also breaking new ground in research. The Oil Curse is essential reading for scholars and those engaged in public debates. An important contribution."—Robert Bates, Harvard University

"This is the single most important book on the resource curse to date. The Oil Curse addresses a timely, policy-relevant issue in a way that nonacademics and academic specialists alike can appreciate. Ross is the preeminent voice on the subject."—Erik Wibbels, Duke University