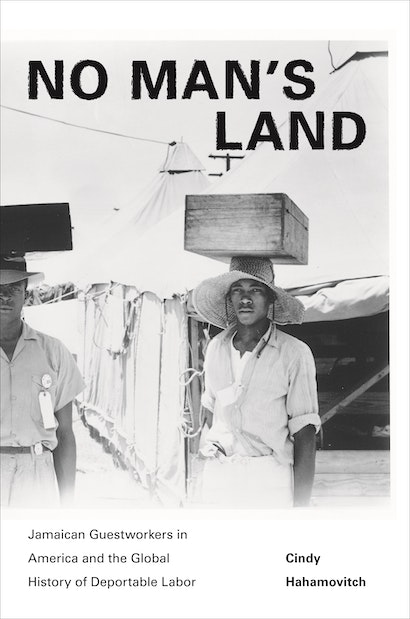 From South Africa in the nineteenth century to Hong Kong today, nations around the world, including the United States, have turned to guestworker programs to manage migration. These temporary labor recruitment systems represented a state-brokered compromise between employers who wanted foreign workers and those who feared rising numbers of immigrants. Unlike immigrants, guestworkers couldn’t settle, bring their families, or become citizens, and they had few rights. Indeed, instead of creating a manageable form of migration, guestworker programs created an especially vulnerable class of labor.

Based on a vast array of sources from U.S., Jamaican, and English archives, as well as interviews, No Man’s Land tells the history of the American “H2” program, the world’s second oldest guestworker program. Since World War II, the H2 program has brought hundreds of thousands of mostly Jamaican men to the United States to do some of the nation’s dirtiest and most dangerous farmwork for some of its biggest and most powerful agricultural corporations, companies that had the power to import and deport workers from abroad. Jamaican guestworkers occupied a no man’s land between nations, protected neither by their home government nor by the United States. The workers complained, went on strike, and sued their employers in class action lawsuits, but their protests had little impact because they could be repatriated and replaced in a matter of hours.

No Man’s Land puts Jamaican guestworkers’ experiences in the context of the global history of this fast-growing and perilous form of labor migration.

Cindy Hahamovitch is the B. Phinizy Spalding Distinguished Professor of History at the University of Georgia and a Distinguished Lecturer for the Organization of American Historians. She is the author of The Fruits of Their Labor: Atlantic Coast Farmworkers and the Making of Migrant Poverty, 1870–1945.

"No Man's Land is a fascinating, engaging study of one of the less-known guest worker programs in the U.S., the temporary recruitment of Jamaican nationals to work in the agriculture industry. Basing her work on a wide range of primary documents and oral interviews, the author illustrates the harsh and vulnerable working and living conditions guest workers experienced as they toiled in the fields of the Northeast, the South, and Florida. . . . Overall, this is a fantastic book that gives a clear understanding of how Jamaican guest workers labored, lived, and struggled in the U.S.; the political and economic debates behind the rise and fall of temporary work programs; and the similarities and differences with other guest worker programs throughout the world."—Choice

"Hahamovitch weaves together an illuminating account of history that explores how greed, racial tensions, political persuasion, and lots and lots of money created and preserved the American guestworker program."—Jihan A. Kahssay, European Legacy

"Cindy Hahamovitch's award-winning book . . . deserves the widespread praise that it has received. In this well-written, carefully crafted, and compelling book, Hahamovitch provides a fascinating account of the experiences of Jamaican guestworkers and the H2 Program that brought them to the United States. . . . Hahamovitch's work is filled with original insights and compelling arguments that should be of use to anyone who is interested in race relations, global capitalism, and justice. Perhaps most important, Hahamovitch documents and explains how the rise of guestworker programs is usually accompanied by an equally significant rise in undocumented immigration."—Kathleen Mapes, Journal Of Southern History

"No Man's Land stakes out important new directions for migration scholarship, and provides a timely intervention into policy debates on immigration reform. The outline of a global history of guest worker programs is an important step in moving beyond the traditional methodological nationalism of labor studies. . . . No Man's Land will no doubt inspire further explorations in this vein."—James Braun, H-Net Reviews

"No Man's Land is a valuable contribution to our understanding of the factors influencing the demand for and supply of temporary foreign workers. It is thoroughly researched, well written, and a must-read for those interested in this increasingly important subject."—Ray Marshall, Rapoport Centennial Chair in Economics and Public Affairs, University of Texas, Austin and former U.S. Secretary of Labor

"In No Man's Land, Cindy Hahamovitch brilliantly explores the world of guest workers and the complex history of America's relationship with them. In the confused and confusing debate over jobs, immigration, and the economy, this book is a must-read. If you have ever eaten an apple or put sugar in your coffee, it is time you got to know the people who help put these foods on your table."—Kevin Bales, president, Free the Slaves

"With clarity and force, this book presents an original argument about a subject of historical and contemporary importance. Crisp, authoritative, and sympathetic without being sentimental, this sophisticated narrative situates the history of guestworker programs in the postwar United States in a global-historical framework and in relation to the story's direct tie to Jamaica."—Mae Ngai, author of The Lucky Ones: One Family and the Extraordinary Invention of Chinese America

"No Man's Land is not only full of surprises but also a pleasure to read. Behind its exhaustive research and fine craft, it brings to us a history of the greatest importance today."—Linda Gordon, author of Dorothea Lange: A Life Beyond Limits