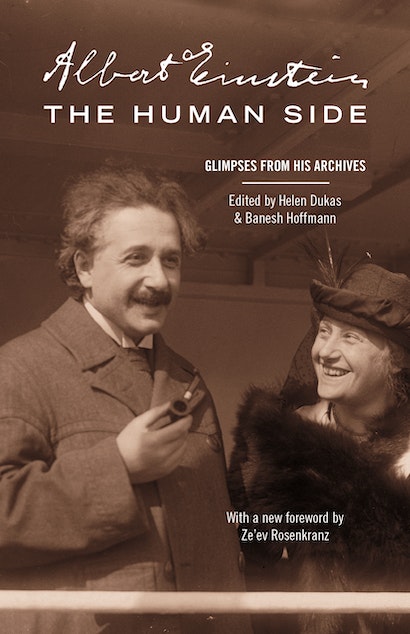 Modesty, humor, compassion, and wisdom are the traits most evident in this illuminating selection of personal papers from the Albert Einstein Archives. The illustrious physicist wrote as thoughtfully to an Ohio fifth-grader, distressed by her discovery that scientists classify humans as animals, as to a Colorado banker who asked whether Einstein believed in a personal God. Witty rhymes, an exchange with Queen Elizabeth of Belgium about fine music, and expressions of his devotion to Zionism are but some of the highlights found in this warm and enriching book.

Helen Dukas (1896-1982) became Einstein's secretary in 1928 and, after his death in 1955, was a trustee of his literary estate and the archivist of his papers. Banesh Hoffmann (1906-1986) was a British mathematician and physicist who collaborated with Einstein on research on the general theory of relativity. Ze'ev Rosenkranz is senior editor at the Einstein Papers Project at the California Institute of Technology and a former curator of the Albert Einstein Archives at the Hebrew University of Jerusalem. His books include Einstein Before Israel (Princeton).

"[Einstein] is revealed not only as a humane philosopher but as a natural aphorist, often with the graces of humor and humility."—Wall Street Journal

"[This book] presents itself in such a modest and loving tone that it is fitting for the memory of the man it lets us hear. It is a fresh and delicious little anthology of citations from the body of Einstein's letters, journal entries and other written comment. . . . These varied, penetrating, warm and open remarks to queens and schoolchildren, friends and antagonists, philosophers and sophomores have been sensitively chosen by two old friends of Einstein's and well translated. The German originals are included."—Scientific American

"[This book] compiled by two of his closest colleagues in later life, Helen Dukas and Banesh Hoffmann, aims to show what kind of a person Einstein was. By a series of quotations from letters, jottings and unpublished documents, for example, Dukas and Hoffmann demonstrate as clearly as anybody could expect that Einstein was a courteous, kindly, witty, fearless and lonely man. . . . It is a bedside book."—Washington Post