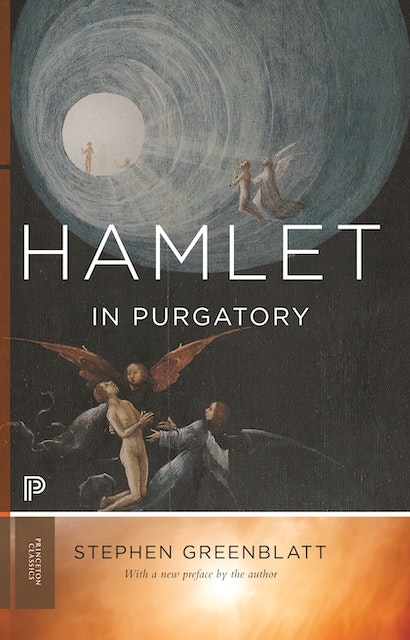 In Hamlet in Purgatory, renowned literary scholar Stephen Greenblatt delves into his longtime fascination with the ghost of Hamlet’s father, and his daring and ultimately gratifying journey takes him through surprising intellectual territory. It yields an extraordinary account of the rise and fall of Purgatory as both a belief and a lucrative institution — as well as a capacious new reading of the power of Hamlet.


In the mid-sixteenth century, English authorities abruptly changed the relationship between the living and dead. Declaring that Purgatory was a false “poem,” they abolished the institutions and banned the practices that Christians relied on to ease the passage to Heaven for themselves and their dead loved ones. Greenblatt explores the fantastic adventure narratives, ghost stories, pilgrimages, and imagery by which a belief in a grisly “prison house of souls” had been shaped and reinforced in the Middle Ages. He probes the psychological benefits as well as the high costs of this belief and of its demolition.


With the doctrine of Purgatory and the elaborate practices that grew up around it, the church had provided a powerful method of negotiating with the dead. The Protestant attack on Purgatory destroyed this method for most people in England, but it did not eradicate the longings and fears that Catholic doctrine had for centuries focused and exploited. In his strikingly original interpretation, Greenblatt argues that the human desires to commune with, assist, and be rid of the dead were transformed by Shakespeare — consummate conjurer that he was — into the substance of several of his plays, above all the weirdly powerful Hamlet. Thus, the space of Purgatory became the stage haunted by literature’s most famous ghost.


This book constitutes an extraordinary feat that could have been accomplished by only Stephen Greenblatt. It is at once a deeply satisfying reading of medieval religion, an innovative interpretation of the apparitions that trouble Shakespeare’s tragic heroes, and an exploration of how a culture can be inhabited by its own spectral leftovers.


This expanded Princeton Classics edition includes a new preface by the author.

"Greenblatt's mode of analysis has always been to leap the gulf between the early modern past and the present. . . . Hamlet in Purgatory, his finest book in years, is a magnificent extended commentary on the otherness of the work in which Hamlet's father's ghost walked on stage. Greenblatt leaves it to us to find the spaces that it now haunts within the family or the world of politics, in the bedroom or on the battlements."—Peter Holland, New York Review of Books

"[A] highly instructive investigation of the role of spirits from the other world in Shakespeare. [Greenblatt's] writing here is poised, precise, and . . . eloquent. . . . Hamlet in Purgatory is an exemplary work of historically informed literary interpretation."—Robert Alter, New York Times Book Review

"This is an interesting book on a grave matter . . . We marvel that the author can make so much out of a slender theme, but it is the device of the good academic writer to make small amounts of material yield golden insights."—Peter Ackroyd, The Times of London

"Greenblatt's fascination with ghostly texts is contagious, and he is virtually unequaled among literary critics as a prose stylist. . . . [Hamlet in Purgatory] greatly succeeds in bringing alive the powerful complex of fear and longing Shakespeare so deftly deployed. Required reading for those who study Shakespeare, this graceful analysis should also give considerable pleasure to those who merely enjoy him."—Publishers Weekly

"Greenblatt's is not by any means nostalgic reading. The book gains its energy from an ongoing tension between the author's intellectual openness to apparently bizarre religious practices and his sharp skepticism. . . . To have explicated new aspects of a play that has probably been more intensely studied than any other work of literature is a remarkable achievement that triumphantly vindicates the book's method. . . . Enthralling reading. . . . Greenblatt has offered genuinely new insights that make the familiar words seem strange and new, and that will speak powerfully to a new generation uneasy about its own unease with an earlier generation's religious beliefs."—David Norbrook, The New Republic

"A learned and persuasive book."—John Bossy, London Review of Books

"Hamlet in Purgatory neither pretends to solve the mysteries of the play nor indulges in fruitless speculation about Shakespeare's own sectarian allegiances. Instead, it offers masterly accounts first of the history of the idea of Purgatory and its decline, then of the importance of ghosts and related apparitions in the whole range of Shakespeare's plays. . . . Profoundly original."—Jonathan Bate, The Sunday Telegraph

"[An] astonishing work of historical reconstruction. . . . [Greenblatt] has taken on the challenge of defamiliarizing the most famous play in Western literature by placing it in its proper theological setting. . . . [W]hile he must definitely rank as the most influential and knowledgeable of all the New Historicists he now shows himself in this book as something more, much more."—Edward T. Oakes, Commonweal

"Greenblatt reveals how Shakespeare turned the Anglican assault on the idea of purgatory as mere poetry into an indispensable poetic resource. In addition to this decisive repositioning of Hamlet's place in modern culture, Greenblatt provides extraordinary readings of little-know works. . . . A major work of contemporary scholarship."—Choice

"A brilliant treatment of the history of Purgatory in England and its survivals and echoes throughout Shakespeare's plays, above all Hamlet."—Carol Zaleski, First Things

"Greenblatt has shown beautifully what compellingly affective, even ethical, 'claims' Shakespeare's imaginary characters can make on modern readers, rewarding us with some of his liveliest and most original critical writing to date."—Katherine Duncan-Jones, Times Literary Supplement

"A magisterial study containing impeccable scholarship, interesting narratives, incisive analyses of specific passages, cogent generalizations based upon a number of disciplines, seamless utilization of appropriate quotations, and, finally, a compelling sensitivity to the effects of literature on its past and present audiences."—Frank Ardolino, Sixteenth Century Journal

"Beyond its brilliant illumination of Hamlet, Stephen Greenblatt's book uses historical evidence to probe the nature of human memory—by nature insistent, contradictory, in every sense haunted—as it copes with the stark, yet mysterious reality of death. With a rare combination of learning, imagination and grace Greenblatt has created an exciting work of scholarship, alert to the ways a great work of art can both resemble and transform other modes of discourse and perception."—Robert Pinsky

"Hamlet in Purgatory is a virtuoso exercise in untangling the interwoven threads of feeling and belief in early-seventeenth-century England . . . In this bold and brilliant book, Greenblatt demonstrates utterly compellingly why Hamlet can still hold our spiritual attention today."—Lisa Jardine

"My understanding of the traditions concerning Purgatory, both learned and popular, has been gratifyingly deepened by the rich detail of Greenblatt's study. . . . The nature of the ghost of Hamlet's father is an old scholarly puzzle, but Greenblatt's book raises the discussion to a new level, and does so without dogmatism, rather with a subtle acceptance of the ambiguities inherent not only in the Ghost but in the great play as a whole. The book will be welcomed by all who care about the subject, and for the insights already known to abound in this scholar's work."—Frank Kermode

"Stephen Greenblatt is a famously beguiling writer. That power of enchantment does not fail him here. His skill as a storyteller is constantly on display. But so too is his no less renowned skill as a skeptically demystifying cultural critic. The result is a book whose remarkable energy derives, as does that of Hamlet itself, from the mutually contradictory impulses it so tellingly expresses."—Richard Helgerson, University of California, Santa Barbara

"This book is a brilliant essay on memory. Although it serves as a learned history of the idea of Purgatory and a subtle reading of Hamlet, it is primarily a book about how a culture faces loss, one that is gracefully, even movingly, written and one which reveals, as always, Greenblatt to be an unusually sensitive critic and thinker."—David Scott Kastan, Columbia University