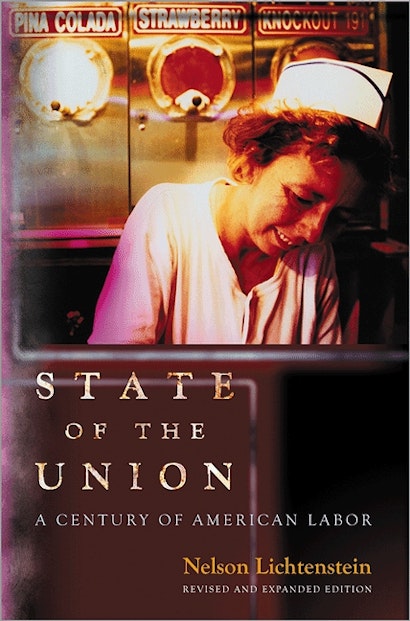 In a fresh and timely reinterpretation, Nelson Lichtenstein examines how trade unionism has waxed and waned in the nation’s political and moral imagination, among both devoted partisans and intransigent foes. From the steel foundry to the burger-grill, from Woodrow Wilson to John Sweeney, from Homestead to Pittston, Lichtenstein weaves together a compelling matrix of ideas, stories, strikes, laws, and people in a streamlined narrative of work and labor in the twentieth century.

The “labor question” became a burning issue during the Progressive Era because its solution seemed essential to the survival of American democracy itself. Beginning there, Lichtenstein takes us all the way to the organizing fever of contemporary Los Angeles, where the labor movement stands at the center of the effort to transform millions of new immigrants into alert citizen unionists. He offers an expansive survey of labor’s upsurge during the 1930s, when the New Deal put a white, male version of industrial democracy at the heart of U.S. political culture. He debunks the myth of a postwar “management-labor accord” by showing that there was (at most) a limited, unstable truce.

Lichtenstein argues that the ideas that had once sustained solidarity and citizenship in the world of work underwent a radical transformation when the rights-centered social movements of the 1960s and 1970s captured the nation’s moral imagination. The labor movement was therefore tragically unprepared for the years of Reagan and Clinton: although technological change and a new era of global economics battered the unions, their real failure was one of ideas and political will. Throughout, Lichtenstein argues that labor’s most important function, in theory if not always in practice, has been the vitalization of a democratic ethos, at work and in the larger society. To the extent that the unions fuse their purpose with that impulse, they can once again become central to the fate of the republic. State of the Union is an incisive history that tells the story of one of America’s defining aspirations.

This edition includes a new preface in which Lichtenstein engages with many of those who have offered commentary on State of the Union and evaluates the historical literature that has emerged in the decade since the book’s initial publication. He also brings his narrative into the current moment with a final chapter, “Obama’s America: Liberalism without Unions.?

Nelson Lichtenstein is Professor of History at the University of California, Santa Barbara. He was the 2012 recipient of the Sol Stetin Award in Labor History and is the author of twelve books, including Walter Reuther: The Most Dangerous Man in Detroit, Labor's War at Home, and The Retail Revolution: How Wal-Mart Created a Brave New World of Business.

"A remarkable accomplishment. . . . Lichtenstein provides an authoritative account of labor's decline, an agenda for its renewal and an argument for the necessity of its revitalization if American democracy is to thrive in coming years. The result is a brilliant historical introduction to today's labor movement and the perils and possibilities that confront it. . . . If American labor's fortunes do improve, no recent book will have made a greater contribution to its revival."—Joseph A. McCartin, The Washington Post

"Obituaries of the labor movement, or at least predictions of its impending demise, are familiar to readers of the popular and business presses and various academic tomes. However one comes down on the issues of the prospects for labor's revival or the desirablity of democratizing the workplace, the country's recent economic crisis has made the labor question again worth debating vigorously. State of the Union is an excellent start."—Eric Arnesen, Chicago Tribune

"Thought-provoking. . . . State of the Union is a history written with a purpose—to encourage and energize a struggling labor movement, and to remind its leaders, and the reader, of the power of big ideas."—Michael Wald, Monthly Labor Review

"This is an important, timely book whose focus on ideas and ideology offers a fresh perspective that is sure to generate useful debate over labor's historical choices and current status. . . . Lichtenstein has performed a most valuable service in his astute delineation of the specific historical circumstances that have both advanced and eroded the union idea during the twentieth century."—Robert Bussel, Industrial and Labor Relations Review

"A century ago labor issues were at the heart of American politics. . . . How could the rights of citizens be protected as the power of capital grew and workers toiled under undemocratic conditions for large private corporations? Historian Nelson Lichtenstein's State of the Union superbly surveys and analyzes how these dilemmas were temporarily resolved in an unsatisfactory way in the middle of the 20th Century. Labor struggles didn't disappear entirely, but largely disappeared from public debate—and have once again become as relevant as during the Progressive Era."—David Moberg, In These Times

"A fascinating survey of twentieth-century American labor. Unlike many such works, Nelson Lichtenstein's synthesis is a pleasure to read; passionate, shrewd in its judgments, and comprehensive."—Lawrence B. Glickman, Journal of American History

"A book to be greatly admired and recommended. Lichtenstein has talked in forthright and keen ways fractious debates among scholars as well as historical and ongoing fractures of American society. . . . The power of his book lies not in prescription, but rather in [Lichtenstein's] acute, erudite and provocative historical analysis."—Walter Licht, EH.NET

"Lichtenstein has written a thought-provoking book that seeks to put the American labor movement's fate into a broad context. . . . His wide reading, fresh insights, and coherent narrative make this volume one of this year's most important works of labor history."—Choice

"As an inquiry into 'labor' as a 20th-century idea and ideal, Lichtenstein's book is a thoughtful attempt to link labor's record with the capricious history of identity politics and ideological change. An unabashed partisan on the matter, Lichtenstein maintains that an energetic and forceful labor movement is essential to the economic system and, indeed, to American democracy itself."—Jennifer Szalai, New Statesman

"Lichtenstein provides a knowledgeable overview of the signal events since the Wagner Act of 1935. . . . An informed analytical history."—Booklist

"While labor's nascent grassroots internationalism remains overshadowed by flag waving displays of 'national unity,' trade unionists have yet to be rewarded for their patriotism, even with a modest boost in unemployment benefits. . . . Into this bleak landscape arrives State of the Union, Nelson Lichtenstein's intellectual history of labor's past 100 years. . . . The author's views are informed by both scholarship and activism"—Steve Early, The Nation

"Scholars have come to look to Nelson Lichtenstein for state-of-the-art work on American labor history. Now he has synthesized his immense learning into a powerful narrative of the ups and downs of unions since the New Deal. Elegiac, sympathetic, and keenly realistic, State of the Union focuses, above all, on the role of ideas and ideology in shaping contentious outcomes. The writing is engaged, analytically suggestive, and thoughtfully revisionist. Not just students of trade unions, but historians of the moments and episodes Lichtenstein chronicles, will be wrestling with this fascinating book for a long time to come."—Ira Katznelson, Ruggles Professor of Political Science and History, Columbia University

"This is a brilliant work of historical synthesis and interpretation. No other historian has produced a narrative that cogently surveys intellectual developments, economic change, political and legal conflict, and the complexities of labor's internal struggles and weaves them into a compelling narrative that makes sense of the rise and fall of the working-class movement."—Michael Kazin, Professor of History, Georgetown University

"Lichtenstein's textured account offers an impressive combination of astute historical analysis and keen social insight. Lichtenstein demonstrates how, despite its civil rights origins, the 'rights revolution' of the past generation has joined free-market ideology in undermining the legal and social basis for worker solidarity and union success. Greater individual freedoms have ironically not always helped the working people of America."—David Abraham, Professor of Law, University of Miami Law School

"Nelson Lichtenstein, one of our leading historians, follows the movement for democracy and rights at work over the last hundred years, offering a masterful synthesis of the new labor history and the first comprehensive framework for a history of labor in our time."—Dorothy Sue Cobble, Professor of Labor Studies, Rutgers University

"State of the Union is a uniquely important study of the labor movement in twentieth-century American politics. Lichtenstein demonstrates both an intricate, grounded knowledge of union dynamics and a finely nuanced, sophisticated understanding of American political history since the New Deal. This book is a must read for anyone seriously interested in making sense of American politics during the last three-quarters of a century."—Adolph Reed, Professor of Political Science on the Graduate Faculty of Political and Social Science, New School University, and member of the Interim National Council of the Labor Party

"You can find no better guide to the past and present of the American labor movement than Nelson Lichtenstein. Aimed at a general audience, this book shows how the health of American democracy depends on vital working-class organizations. It examines why unions have flourished in the past and asks how they may do so again."—William Forbath, Professor of Law and History, University of Texas, Austin, and author of Law and the Shaping of the American Labor Movement

"Why has the labor movement's ability to speak collectively on behalf of American workers declined so dramatically? Ranging confidently across political, intellectual, social, and economic history, Nelson Lichtenstein gives us a sweeping and provocative analysis of the 'labor question' in the past fifty years—and how workers' basic democratic rights have been increasingly marginalized, contained, or eliminated. He eloquently reminds us that if we are to have democracy in America, we must celebrate, not repress, basic human rights at the workplace."—Dana Frank, Professor of American Studies, University of California, Santa Cruz