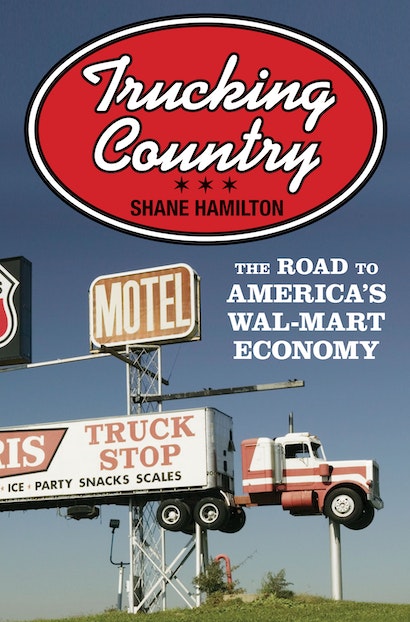 Trucking Country is a social history of long-haul trucking that explores the contentious politics of free-market capitalism in post-World War II America. Shane Hamilton paints an eye-opening portrait of the rural highways of the American heartland, and in doing so explains why working-class populist voters are drawn to conservative politicians who seemingly don’t represent their financial interests.


Hamilton challenges the popular notion of “red state” conservatism as a devil’s bargain between culturally conservative rural workers and economically conservative demagogues in the Republican Party. The roots of rural conservatism, Hamilton demonstrates, took hold long before the culture wars and free-market fanaticism of the 1990s. As Hamilton shows, truckers helped build an economic order that brought low-priced consumer goods to a greater number of Americans. They piloted the big rigs that linked America’s factory farms and agribusiness food processors to suburban supermarkets across the country.

Trucking Country is the gripping account of truckers whose support of post-New Deal free enterprise was so virulent that it sparked violent highway blockades in the 1970s. It’s the story of “bandit” drivers who inspired country songwriters and Hollywood filmmakers to celebrate the “last American cowboy,” and of ordinary blue-collar workers who helped make possible the deregulatory policies of Jimmy Carter and Ronald Reagan and set the stage for Wal-Mart to become America’s most powerful corporation in today’s low-price, low-wage economy.

Shane Hamilton is associate professor of history and associate director of the Center for Virtual History at the University of Georgia. With Sarah Phillips, he is author of The Kitchen Debate and Cold War Consumer Politics. 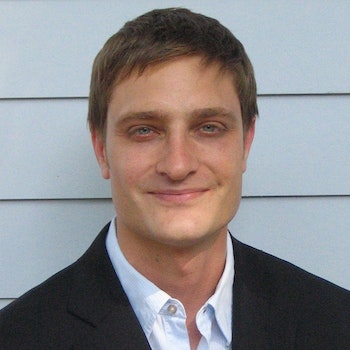 "This detailed, closely argued book chronicles the U.S. trucking industry's history, particularly its role in rolling back New Deal policies and regulations. Hamilton is a knowledgeable guide to everything from beef trusts to the National Farmers Organization to the 1979 strike that opens the book, in which 75,000 truckers tried to shut down the nation's highway system. Economy and market buffs looking for a different perspective on America's 20th century economic evolution will find this intriguing and informative."—Publishers Weekly

"With the US again engaged in a debate over the merits of regulation versus the free market, the book's academic research touches on some timely historical issues. It is also a fascinating account of the political battles over the diesel engine and the refrigerated truck, which had emerged as the new technology of the 1920s and 1930s and a threat to the dominance of the railroad distribution system for beef and milk by a few large meat packing companies and local dairies."—Jonathan Birchall, Financial Times

"Trucking Country offers a finely crafted mix of cultural identity, regional tradition, economic history, legislative politics, political argument and policy transformation. Shane Hamilton uses the history and contemporary development of the trucking industry in the U.S. to reveal the social, economic and political dynamics that were instrumental in shifting the industry away from the heavy regulation of the Interstate Commerce Commission (ICC) towards deregulation, fragmentation, and free-market competition."—Michael Foley, Times Higher Education

"Independent trucking is for Hamilton what Kansas was for Frank—the locus that shows a part of what has gone wrong with American politics."—David Kusnet, Bookforum

"Trucking Country intervenes in [the] crowded debate over the demise of New Deal liberalism from a genuinely original vantage point: the political culture of independent long-haul truckers and the political economy shaped by the agribusiness corporations that they served."—Matthew Lassiter, Democracy

"If you want to know what really drives the US economy, then this thoroughly researched and well-written book is for you—and that's a big 10-4, Rubber Duck."—Joe Cushnan, The Tribune

"[B]y drawing together structural, institutional, economic, and cultural analyses, Hamilton has offered a dense, textured, and complex account of his subject. Trucking Country is essential to any understanding of the decline of the New Deal and the rise of economic conservatism at the end of the twentieth century."—Joseph E. Lowndes, Perspectives on Politics

"[U]ndeniably a major achievement. Shane Hamilton has written a brilliant book that will be required reading for anyone interested ill understanding the conservative groundswell of the postwar era."—Jordan Kleiman, Technology and Culture

"This is a convincing and useful book."—Peter J. Hugill, Journal of American History

"[A] fascinating study of the hauling business. . . . From the 1930s through the end of the Carter administration, Hamilton's history is thoughtful, detailed, and informative."—Jesse Walker, Reason

"Move over Tom Frank. Hamilton shows that what buried the New Deal was not the recent rise of cultural conservatism, but a longstanding and deep rejection of government intervention in the economy. One of the best history books ever written on the origins of neoliberalism."—Ted Steinberg, author of Down to Earth

"Shane Hamilton traces how an obscure loophole in transportation law helped reshape the rural economy—and, in the process, changed the way we eat. This is an imaginative, provocative piece of work."—Marc Levinson, author of The Box

"Well-written and tightly argued, Shane Hamilton's Trucking Country illuminates one of the twentieth century's most important transformations: the role of independent truckers, many of them former farmers, in seizing the delivery of agricultural products from railroads, revolutionizing food distribution, and, paradoxically, abetting the triumph of agribusiness."—Pete Daniel, National Museum of American History

"A startlingly original contribution. Shane Hamilton has crafted a truly fresh, unfamiliar, and enormously enlightening account of the decline of economic liberalism in postwar America. This is a brilliant book, one that should be read by anyone interested in exploring the intersection of politics, culture, and economics in modern America."—Joseph A. McCartin, author of Labor's Great War

"Trucking Country is a highly innovative and strikingly unique piece of work. Hamilton approaches one of the most intensely studied historical topics of the current scholarly generation—the demise of New Deal liberalism—from an angle that virtually no other social, political, labor, or cultural historian has attempted. Hamilton has written a superb and persuasive book."—Nelson Lichtenstein, author of State of the Union: A Century of American Labor