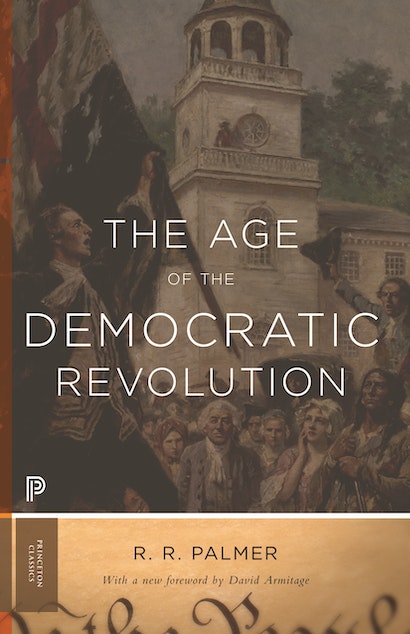 For the Western world, the period from 1760 to 1800 was the great revolutionary era in which the outlines of the modern democratic state came into being. Here for the first time in one volume is R. R. Palmer’s magisterial account of this incendiary age. Palmer argues that the American, French, and Polish revolutions—and the movements for political change in Britain, Ireland, Holland, and elsewhere—were manifestations of similar political ideas, needs, and conflicts. Palmer traces the clash between an older form of society, marked by legalized social rank and hereditary or self-perpetuating elites, and a new form of society that placed a greater value on social mobility and legal equality.

Featuring a new foreword by David Armitage, this Princeton Classics edition of The Age of the Democratic Revolution introduces a new generation of readers to this enduring work of political history.

R. R. Palmer (1909–2002) was professor emeritus of history at Yale University and a guest scholar at the Institute for Advanced Study in Princeton. His books include Twelve Who Ruled: The Year of the Terror in the French Revolution (Princeton). The first volume of The Age of the Democratic Revolution won the Bancroft Prize in 1960. David Armitage is the Lloyd C. Blankfein Professor of History at Harvard University.

"Praise for the previous Volume 1 edition: "Robert Palmer possesses the combination of patient scholarship and broad philosophical inquiry the task demands. . . . This book will enlarge and clarify our understanding of modern Western history. It will do more than that. It will re-emphasize the strength and vitality of the roots that supported the growth of democracy in the Old and New Worlds.""—Geoffrey Bruun, The New York Times

"Praise for the previous Volume 2 edition: ". . . This is the most important book on the Europe of the French Revolution published in English for more than a generation. It marks the turn of the tide, demonstrating as it does the hollowness of the current conservative interpretation of the Revolution and it will discredit for the future all sloppy generalizations about Jacobins, demagogues, and revolutionary mobs. . . . [Professor Palmer's] knowledge of printed sources is exceptionally thorough, ancient as well as modern, and his judgment of what is good and reliable seems unerring.""—J. H. Plumb, New York Review of Books

"Praise for the previous Volume 1 edition: "Professor Palmer presents his historical synthesis with meticulous scholarship, pungent clarity, and emphatic conviction. . . . He has the rare gift of analyzing a historical situation in a manner that reveals, at the same time, both its past and its present significance.""—J. Salwyn Schapiro, Saturday Review

"Praise for the previous Volume 1 edition: "It is a stimulating and provocative book in explicit defense of a position—a moral, political, if not quite religious position—which is the relatively unexamined position of the great majority of Americans. A reading of this book should help many to an explicit examination of their beliefs that may strengthen them and should certainly clarify them.""—Crane Brinton, New York Herald Tribune

"Praise for the previous Volume 2 edition: "With the publication of this second volume of The Age of the Democratic Revolution, R. R. Palmer concludes his patient and magisterial reassessment of the revolutionary ferment that stirred Europe and America between 1760 and 1800. . . . While Volume I covered thirty-two years, Volume II covers only eight, and the detail is correspondingly enriched. The stage remains the same, a vast stage extending from Scotland to Sicily and from Moscow to the Mississippi. Manipulating the spotlight of attention with skill and precision, Palmer shifts the focus from country to country, clarifying the particular conditions and specific developments in each. Despite the frequent changes of scene the drama is saved from incoherence by its dominant theme, a theme that emerges more strongly with each chapter as the evidence supporting it becomes more cumulative and convincing.""—Geoffrey Bruun, Journal of Modern History

"Praise for the previous Volume 2 edition: ". . . A work of historical synthesis that has no equal.""—Maurice Dolbier, New York Herald Tribune