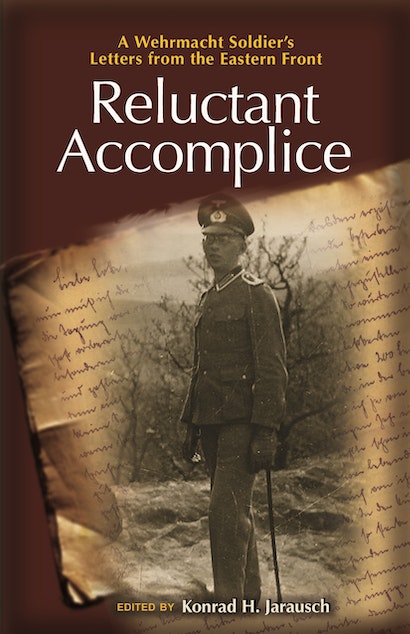 Reluctant Accomplice is a volume of the wartime letters of Dr. Konrad Jarausch, a German high-school teacher of religion and history who served in a reserve battalion of Hitler’s army in Poland and Russia, where he died of typhoid in 1942. He wrote most of these letters to his wife, Elisabeth. His son, acclaimed German historian Konrad H. Jarausch, brings them together here to tell the gripping story of a patriotic soldier of the Third Reich who, through witnessing its atrocities in the East, begins to doubt the war’s moral legitimacy. These letters grow increasingly critical, and their vivid descriptions of the mass deaths of Russian POWs are chilling. They reveal the inner conflicts of ordinary Germans who became reluctant accomplices in Hitler’s merciless war of annihilation, yet sometimes managed to discover a shared humanity with its suffering victims, a bond that could transcend race, nationalism, and the enmity of war.

Reluctant Accomplice is also the powerful story of the son, who for decades refused to come to grips with these letters because he abhorred his father’s nationalist politics. Only now, late in his life, is he able to cope with their contents — and he is by no means alone. This book provides rare insight into the so-called children of the war, an entire generation of postwar Germans who grew up resenting their past, but who today must finally face the painful legacy of their parents’ complicity in National Socialism.

Konrad H. Jarausch is the Lurcy Professor of European Civilization at the University of North Carolina, Chapel Hill. His many books include After Hitler: Recivilizing Germans, 1945-1995 and Shattered Past: Reconstructing German Histories (Princeton).

"It's difficult or impossible to summon sympathy for a soldier in Hitler's army—even one with no hatred for Jews—but the letters home of Konrad Jarausch do peel away stereotypes."—Neal Gender, American Jewish World

"A detailed and disturbing portrait of a so-called average German soldier of the time. . . . Jarausch has edited 350 of his father's letters, sent from occupied Poland and the PoW camps in Russia between 1939 until his death. His father was too old at 40 to be involved in fighting but he was close enough to the front to give gruesome accounts of the enormous Russian death toll in the camps. . . . [W]hat these letters reveal in astonishing detail is that his belief in German superiority begins to weaken as he notices and hears of the murderous German reprisals, shootings and ethnic cleansing."—Louis Nowra, The Australian

"Thought-provoking in its ambiguities. . . . By age, temperament and conviction, then, Jarausch seemed designed for the role of skeptic about the Nazi regime. Reluctant Accomplice charts the growth of Jarausch's belief that Hitler's war was a disaster, for humanity and for Germany itself. . . . The case of Jarausch suggests that, in a situation where radical evil holds sway, goodness has to become equally radical in order to combat it."—Adam Kirsch, The Tablet

"Reluctant Accomplice: A Wehrmacht Soldier's Letters from the Eastern Front (Princeton University Press), is a revealing glimpse into the mind of a patriotic German who was skeptical of the Nazi leadership and soured on the fascist regime."—Sheldon Kirshner, Canadian Jewish News

"Jarausch's voluminous set of correspondence offers a thoughtful and detailed account of life as a German soldier on the Eastern Front. . . . It shows just how much coming to terms with the Nazi past is still an ongoing process."—Hester Vaizey, European History Quarterly

"This remarkable compilation of wartime letters is nothing short of one of the most humbling and insightful reads you're likely to come across this year."—David Marx, David Marx Book Reviews

"Reluctant Accomplice is a fascinating, important, and highly readable collection. The documents add depth, complexity, and a tragically human dimension to our understanding of how German soldiers experienced the war on the Eastern Front."—Alan E. Steinweis, Journal of Modern History

"In this outstanding edition, Konrad H. Jarausch and his assistants Klaus J. Arnold and Eve M. Duffy have done an excellent job. The book contains an impressive biographical essay about the son's search for the father he never knew. Writers may succeed in producing approaches of this kind—at least sometimes. But historians? Usually such attempts fall flat. Yet this edition impressively proves the contrary—it is indeed possible."—Christian Hartmann, English Historical Review

"There were German soldiers in World War II who went to war with open eyes. Many condoned what they saw or did not care. Others were shaken, and even they hesitated to write it all down. Their flickers of conscience, the way they struggled to articulate their doubts, their sense of futility in the face of degrading circumstances, and their knowledge of the incommensurability of good deeds in a barbarous war—all this makes the letters of Konrad Jarausch an important and challenging document."—Michael Geyer, University of Chicago

"This is a fascinating and moving collection of letters from the German side of World War II. The esteemed historian Konrad H. Jarausch has edited the letters of his father, a reserve officer on the eastern front, who died of typhoid fever in 1942. With unblinking honesty, Jarausch presents the father he never knew—a deeply religious, well-educated, conservative nationalist, a man sympathetic to the Nazis. Yet amid the brutalities perpetrated by the Third Reich, Jarausch Senior found his common humanity with Nazism's victims. Jarausch Junior's sensitive and intelligent introduction, which masterfully captures the complicated meaning of German history in the twentieth century, only adds to the value of the book."—Eric D. Weitz, author of Weimar Germany: Promise and Tragedy

"This is a moving collection of letters by Jarausch's father, who served as a soldier in World War II and died in Russia in 1942. Here is the evolution of a patriotic supporter of Hitler's regime into a man so horrified by the reality of German war making, war crimes, and genocide that he gradually loses faith in everything he believed in."—Omer Bartov, author of Hitler's Army: Soldiers, Nazis, and War in the Third Reich

"A very intriguing book. These letters provide a valuable portrait of a middle-class German at war. His letters are worth reading for his seriousness of purpose, his wonderful eye for detail, and his persistent humaneness in the face of the awful conditions around him. There is poignancy knowing Jarausch looked for and found his own father, whom he never knew, through these letters."—Norman M. Naimark, author of Fires of Hatred: Ethnic Cleansing in Twentieth-Century Europe