A riveting history of Russia's crimes in Chechnya 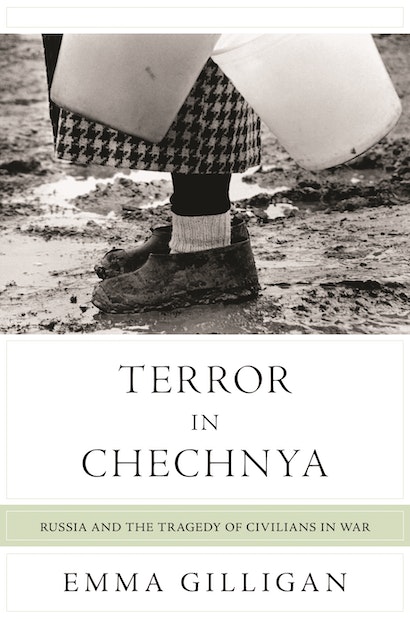 Terror in Chechnya is the definitive account of Russian war crimes in Chechnya. Emma Gilligan provides a comprehensive history of the second Chechen conflict of 1999 to 2005, revealing one of the most appalling human rights catastrophes of the modern era—one that has yet to be fully acknowledged by the international community. Drawing upon eyewitness testimony and interviews with refugees and key political and humanitarian figures, Gilligan tells for the first time the full story of the Russian military’s systematic use of torture, disappearances, executions, and other punitive tactics against the Chechen population.

In Terror in Chechnya, Gilligan challenges Russian claims that civilian casualties in Chechnya were an unavoidable consequence of civil war. She argues that racism and nationalism were substantial factors in Russia’s second war against the Chechens and the resulting refugee crisis. She does not ignore the war crimes committed by Chechen separatists and pro-Moscow forces. Gilligan traces the radicalization of Chechen fighters and sheds light on the Dubrovka and Beslan hostage crises, demonstrating how they undermined the separatist movement and in turn contributed to racial hatred against Chechens in Moscow.

A haunting testament of modern-day crimes against humanity, Terror in Chechnya also looks at the international response to the conflict, focusing on Europe’s humanitarian and human rights efforts inside Chechnya.

Emma Gilligan is assistant professor of Russian history and human rights at the University of Connecticut. She is the author of Defending Human Rights in Russia: Sergei Kovalyov, Dissident and Human Rights Commissioner, 1969-2003.

"Emma Gilligan's book chronicles Moscow's brutal response to the republic's demand for freedom, an onslaught that has shattered Chechen society, fuelled armed resistance across the Caucasus and bred a new generation of violent extremists. She focuses on the second Chechen war, started by Boris Yeltsin in autumn 1999 and pursued by Vladimir Putin when he stepped up from the prime minister's post to the Kremlin in 2000. . . . Her thorough research is enlivened by testimony from Chechen victims of Russian troops and their local henchmen."—Irish Times

"Gilligan provides the definitive history of Russian policies toward Chechnya in the period from 1999 to the present. Utilizing first-person interviews and documents from Russian, US, and international nongovernmental organizations, she narrates the events of the First and Second Chechen wars, the rise of Chechen terrorism, and the events at Beslan within a larger context of human rights, making comparisons to other 20th-century situations including those in Bosnia. . . . She has created a history remarkably free of technical jargon and specialist vocabulary that should serve as a good introduction to the subject and region for students and scholars of history, political science, and international law."—Choice

"Terror in Chechnya is perhaps the most important book about the Chechen war available in English today."—Anna Brodsky, Russian Review

"[Gilligan's] book is an important contribution to the literature. Her multilayered approach, her ability to highlight competing perspectives, and her insights into the way future investigations of human rights abuses could be conducted make her work a valuable contribution to the study of human rights."—Maria Raquel Freire, Perspectives on Politics

"[T]he Chechen conflict, as a research subject, should be more frequently addressed to from the various perspectives. Gilligan's book is a solid pioneering piece of work in this direction."—Kiryl Kascian, Central European Journal of International and Security Studies

"Emma Gilligan's book is an invaluable guide to the tragic consequences for Chechnya—and Russia—of a twin dynamic that has dominated post-Soviet Russian politics: the use of violence to maintain the territorial dimensions of the state, and the resilience of authoritarian politics."—Simon Cosgrove, Europe-Asia Studies

"This book constitutes a major step forward in the study of war crimes and human rights violations during the second Russo-Chechen war. In Gilligan's view, the principal objective of the Russian leadership was the subjugation and punishment of the Chechen populace. Her book is unprecedented in scope. Henceforth, those interested in this subject will turn first to this volume as a treasure trove of information."—John B. Dunlop, author of Russia Confronts Chechnya

"This is an important study of the human rights disaster that befell the people of Chechnya in the wake of renewed warfare between Russian armed forces and the breakaway republic in 1999. Terror in Chechnya, is a valuable contribution to our understanding of a long-neglected human rights tragedy."—Matthew Evangelista, author of The Chechen Wars