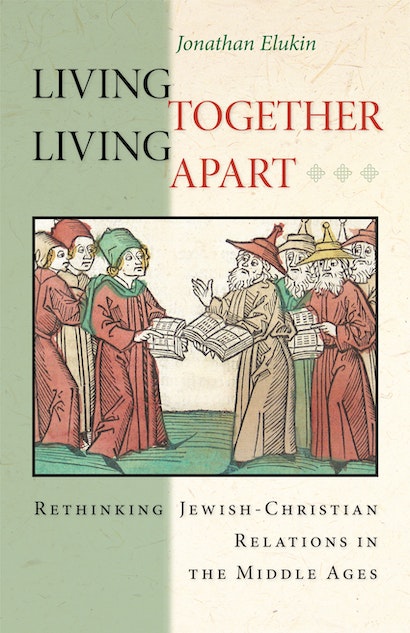 This book challenges the standard conception of the Middle Ages as a time of persecution for Jews. Jonathan Elukin traces the experience of Jews in Europe from late antiquity through the Renaissance and Reformation, revealing how the pluralism of medieval society allowed Jews to feel part of their local communities despite recurrent expressions of hatred against them.


Elukin shows that Jews and Christians coexisted more or less peacefully for much of the Middle Ages, and that the violence directed at Jews was largely isolated and did not undermine their participation in the daily rhythms of European society. The extraordinary picture that emerges is one of Jews living comfortably among their Christian neighbors, working with Christians, and occasionally cultivating lasting friendships even as Christian culture often demonized Jews.


As Elukin makes clear, the expulsions of Jews from England, France, Spain, and elsewhere were not the inevitable culmination of persecution, but arose from the religious and political expediencies of particular rulers. He demonstrates that the history of successful Jewish-Christian interaction in the Middle Ages in fact laid the social foundations that gave rise to the Jewish communities of modern Europe.


Elukin compels us to rethink our assumptions about this fascinating period in history, offering us a new lens through which to appreciate the rich complexities of the Jewish experience in medieval Christendom.

Jonathan Elukin is Associate Professor of History at Trinity College.

"Challenges the standard view that this was a dark period for Jews."—Sheldon Kirshner, Canadian Jewish News

"Instead of emphasizing the conflicts between Christians and Jews, Elukin shows how deeply interconnected the two groups were in their everyday lives...Elukin...makes use of cutting-edge scholarship on medieval Europe to clarify the differing circumstances that controlled Jewish lives...As a lucid, up-to-date survey of Christian-Jewish relations in the pre-modern period, it is helpful and thought-provoking."—Jewish Book World

"Elukin argues that Jewish-Christian relations in the Middle Ages were not limited to persecution and violence, isolation and exclusion. Rather, he asserts that a degree of fluidity existed between Christians and Jews that allowed for 'normal' relations between them....This book will serve as a useful supplement for undergraduate and graduate courses on the Middle Ages."—J. Haus, Choice

"While claims to historiographic innovation are overblown, the book still has the merit of bringing together in a single volume a great deal of previous scholarship that demonstrates the multi-faceted nature of medieval Jewish-Christian interactions in various parts of Europe."—Alexandra Cuffel, Journal of the American Academy of Religion

"This is an engaging and worthwhile book: but it will leave the reader with more questions than answers; perhaps that is what a good book is all about."—Harvey J. Hames, The International History Review

"[T]he volume that Elukin has generated is a remarkable and wholly praiseworthy one. I hope that it gains the wide readership that it richly deserves."—C. Nederman, English Historical Review

"This concise, provocative, and frequently speculative volume is yet another salvo against what Salo Baron famously labeled 'the lachrymose conception of Jewish history.' . . . Elukin's book is a welcome contribution."—Jonathan Boyarin, Speculum

"Elukin displays a commendable knowledge of current literature on a variety of topics. . . . However, this is a commendable effort and a welcome contribution to our understanding of medieval Jewish-Christian relations."—Norman Roth, American Historical Review

"Elukin's treatment of the Jewish-Christian relations in medieval Europe is an excellent contribution to the discussion of the subject. . . . Elukin's emphasis on the need to read the sources critically in the light of the medieval background is a salutatory reminder for professionals in the field, but it also makes this book an excellent choice for a textbook in medieval Jewish history."—Stephen G. Burnett, Central European History

"Elukin knows how to tell a good story. He has condensed one thousand years of Jewish life in Christian Europe into a short, readable narrative."—Daniel J. Lasker, Hebraic Political Studies

"The question that Elukin asks is the right one. The paradox of Jewish persecution and simultaneous survival in medieval Europe demands to be addressed. . . . [I]n broaching the subject of more positive relations, Elukin succeeds in opening the door for historians to embrace this paradox head-on."—Sarah Lamm, Shofar

"The strength of this book lies in its lucid narrative and broad historical arc. As such, it can function as an introduction to the Jewish Middle Ages for undergraduate students—the purpose for which it was, in fact, written. Seen from that angle (and accompanied by much critical guidance), it becomes a valuable resource, providing a fresh look at many of the most important texts about Jewish-Christian relations in an idiom and from a mindset that is accessible for today's students."—Pinchas Roth, Journal of Jewish Studies

"This book offers a much-needed corrective to nearly every treatment of medieval European Jewish history. Instead of an emphasis on persecution and different theories about its sources in church or state policies or in popular anti-Semitism leading to the expulsions of 1290, 1306, and 1492, Elukin proposes a paradigm shift that stresses the everyday convivencia of Jews and Christians who lived side by side most of the time. This book seeks to overturn a dominant view about Christian persecution of Jews in the Middle Ages, reinforced for over fifty years by the Holocaust."—Ivan G. Marcus, Yale University

"This book analyzes the circumstances of Jewish life in medieval Europe in such a way as to explain how Jews managed to survive in Europe at all. Elukin argues that when all the evidence is considered, Jews and Christians did not live in a state of continuous hostility, nor were Jews constantly in danger of annihilation by their Christian neighbors. He really challenges the master narrative of a continuous Christian persecution of Jews whose logical and inevitable conclusion was the Shoah. Elukin will also irritate a lot of people who believe this, but he will be right and they wrong."—Edward Peters, University of Pennsylvania