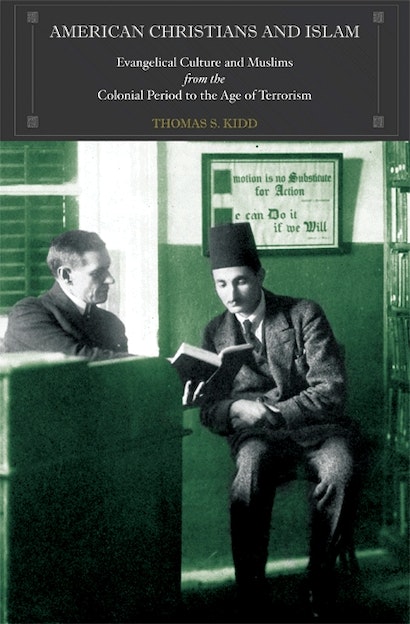 In the wake of the September 11 terrorist attacks, many of America’s Christian evangelicals have denounced Islam as a “demonic” and inherently violent religion, provoking frustration among other Christian conservatives who wish to present a more appealing message to the world’s Muslims. Yet as Thomas Kidd reveals in this sobering book, the conflicted views expressed by today’s evangelicals have deep roots in American history.


Tracing Islam’s role in the popular imagination of American Christians from the colonial period to today, Kidd demonstrates that Protestant evangelicals have viewed Islam as a global threat — while also actively seeking to convert Muslims to the Christian faith — since the nation’s founding. He shows how accounts of “Mahometan” despotism and lurid stories of European enslavement by Barbary pirates fueled early evangelicals’ fears concerning Islam, and describes the growing conservatism of American missions to Muslim lands up through the post-World War II era. Kidd exposes American Christians’ anxieties about an internal Islamic threat from groups like the Nation of Islam in the 1960s and America’s immigrant Muslim population today, and he demonstrates why Islam has become central to evangelical “end-times” narratives. Pointing to many evangelicals’ unwillingness to acknowledge Islam’s theological commonalities with Christianity and their continued portrayal of Islam as an “evil” and false religion, Kidd explains why Christians themselves are ironically to blame for the failure of evangelism in the Muslim world.

Thomas Kidd is associate professor of history at Baylor University and resident scholar at Baylor's Institute for Studies of Religion. He is the author of The Great Awakening: The Roots of Evangelical Christianity in Colonial America and The Protestant Interest: New England after Puritanism.

"Kidd's is a sympathetic and well-informed voice of sanity and Christian equanimity in the midst of this turmoil. His closing appeals to reason, civility, and charitable discourse could provide a better setting, I believe, for a fruitful mission to Islam. Otherwise, one fears what level of catastrophe may be required to discredit Dispensationalist craziness."—Fr. Patrick Henry Reardon, Orthodoxy Today

"Offers an informative tonic that might move Christians in the U.S. beyond deeply embedded suspicions and into more hospitable encounters with Muslims at home and abroad."—Anne Blue Wills, Christian Century

"A key strength of American Christians and Islam is that it surveys a spectrum of American Christian and evangelical thought vis-à-vis Muslims across three centuries, and does so in a manner that is very clear, so that even a reader new to the subject could appreciate it. Assigned in a class on Middle Eastern or Islamic studies, this book would be guaranteed to stimulate lively debate."—Heather J. Sharkey, Contemporary Islam

"As Islam continues its slow be steady growth in America, evangelicals of whatever strip would be wise to consult American Christians and Islam, particularly as they continue to seek ways to approach Islam with sobriety and faithfulness."—Adam S. Francisco, Modern Reformation

"Thomas Kidd has done a great service with his publication of American Christians and Islam. Although there is an endless array of studies on various aspects of the relationships between Muslims and Christians throughout the past 1,400 years, this is, to my knowledge, the first to examine American Evangelical attitudes toward Islam. Kidd presents a vast amount of material in a clear, readable manner, and his book should be of interest to anyone trying to understand the extremely complex dynamic of contemporary Muslim-Christian relations."—Sandra Tonies Keating, Touchstone

"This timely book about American Christian attitudes toward Islam and Muslims is a useful addition to the growing literature on Anglo-American engagements with Islam and Muslims since the colonial age. It is noteworthy primarily for its chronological range and its coverage of American missionaries to the Muslim world."—Edward E. Curtis IV, Journal of American History

"Kidd has produced a gem of a book. It needs to find a high place on interreligious as well as public-policy bibliographies."—John T. Pawlikowski, Journal of Ecumenical Studies

"Kidd's book ably captures the bombast and the predicament of American evangelicals as they attempted to reconcile the missionary imperative with a scrambled sense of eschatological geography."—Nicholas Guyatt, Journal of the Ecclesiastical History

"The story that Kidd tells is compelling and enlightening in its nuanced depiction of conservative American Christian views on Islam and Muslims across three centuries. . . . [T]his book is a well-written and enlightening overview of the American Evangelical approach to Islam."—Akram Fouad Khater, Catholic Historical Review

"[T]his book makes . . . [an] invaluable contribution . . . to our understanding of the history of evangelical attitudes toward Muslims and Islam."—Alan M. Guenther, International Bulletin of Missionary Research

"Kidd accomplishes the aims of his book well, illuminating nearly four hundred years of conservative American Christian interpretations of Islam. The length of the time period and the particular focus on American Christian views make this volume a unique, welcome addition to the field. The book is academic but accessible to a wide audience, a wellspring of primary source information and a penetrating survey. Scholars of American religious history and upper-level students of the subject will consult this volume for years to come."—James Gormam, Restoration Quarterly

"In all respects, American Christians and Islam is a well-balanced, long overdue study, delving deep in the folk memory of America, painting a complex and suggestive profile of the Judeo-Christian-Muslim (dis)connection, celebrating both Christianity and Islamism, while formulating no apologies for either. . . . [I]t is an opportune appearance that seeks to do justice to Qur'anic verse and Islamic scholarship, an admirable monograph launching a timely invitation to grasp the true nature of Islam."—Adriana Neagu, American British and Canadian Studies

"Before Thomas Kidd's magisterial work, American Christians and Islam, no scholar had traced the long and convoluted history of Muslim-Christian exchange in the American experience from colonial beginnings to the present. Kidd brings a deep understanding of both traditions to his analysis and brilliantly demonstrates how so many contemporary American denunciations of Islam—especially evangelical denunciations—have a rich history that goes all the way back to the Age of Exploration and the first English settlements."—Harry S. Stout, Yale University

"Though its emergence as one of the central concerns of our time took the secular-minded by surprise, the friction between Christianity and Islam—the world's two largest and most energetically missionary faiths—is nothing new in American history. As Thomas Kidd shows in this thoughtful and highly accessible account, the conflict runs like a thread through the American past. Knowing that history will provide us with valuable insights about the road ahead—and about ourselves."—Wilfred M. McClay, University of Tennessee

"American Christians and Islam gives historical perspective on a timely topic. Kidd provides a thorough examination of the prism through which American evangelicals have viewed Islam, a prism consisting of fears, challenges, and opportunities. He offers an important chapter in the story of American attitudes toward Muslims. This book fills a gap in the scholarship of American religious culture."—Frank Lambert, author of Religion in American Politics

"American Christians and Islam combines a timely subject, stylistic directness, and a broad scope to create an effective and useful historical survey of evangelical attitudes about Islam that is accessible to a wide audience. Kidd provides succinct readings and elucidates important patterns and shifts that offer readers a revealing overview of the engagements of U.S. evangelical culture with the Islamic world."—Timothy W. Marr, author of The Cultural Roots of American Islamicism

"A significant contribution to the field. There have been plenty of books on Western views of Islam, but none has focused exclusively or comprehensively on American Christian attitudes over such a long period. The scope and targeting of this book make it unique and pathbreaking."—Gerald R. McDermott, Roanoke College