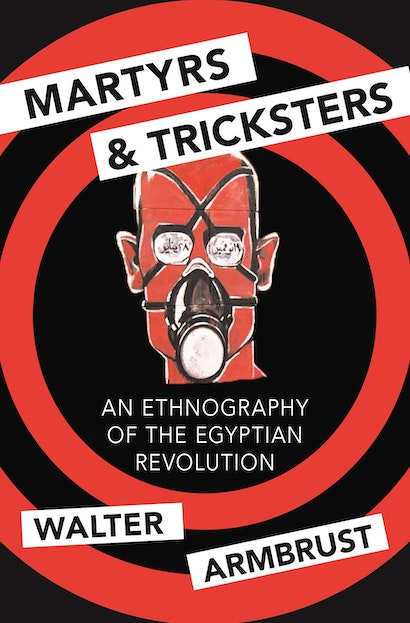 The Egyptian Revolution of 2011 began with immense hope, but was defeated in two and a half years, ushering in the most brutal and corrupt regime in modern Egyptian history. How was the passage from utmost euphoria into abject despair experienced, not only by those committed to revolutionary change, but also by people indifferent or even hostile to the revolution? In Martyrs and Tricksters, anthropologist and Cairo resident Walter Armbrust explores the revolution through the lens of liminality—initially a communal fellowship, where everything seemed possible, transformed into a devastating limbo with no exit. To make sense of events, Armbrust looks at the martyrs, trickster media personalities, public spaces, contested narratives, historical allusions, and factional struggles during this chaotic time.

Armbrust shows that while martyrs became the primary symbols of mobilization, no one took seriously enough the emergence of political tricksters. Tricksters appeared in media—not the vaunted social media of a “Facebook revolution” but television—and they paved the way for the rise of Abd al-Fattah al-Sisi. In the end Egypt became a global political vanguard, but not in the way the revolutionaries intended. What initially appeared as the gateway to an age of revolution has transformed the world over into the age of the trickster.

Delving into how Egyptians moved from unprecedented exhilaration to confusion and massacre, Martyrs and Tricksters is a powerful cultural biography of a tragic revolution.

Walter Armbrust is the Albert Hourani Fellow and associate professor in modern Middle Eastern studies at St. Antony's College, University of Oxford. He is the author of Mass Culture and Modernism in Egypt.

“In Martyrs and Tricksters, Armbrust examines the public surfaces of the Egyptian revolution of 2011, linking them to deeper political, economic, and social structures operating on local, regional, and global scales. This ambitious and well-researched book demonstrates once again the author’s deep fluency in Egyptian popular culture and history.”—Gregory Starrett, University of North Carolina, Charlotte

“Martyrs and Tricksters offers an original, compelling framework for comprehending the 2011 uprisings in Egypt and their aftermath. With encyclopedic knowledge of Egyptian popular culture and sophisticated mass media analysis, Armbrust shows how these liminal figures embody the tensions of political change. This book is crucial reading for anyone seeking to understand the downfall of Mubarak and the resurgence of authoritarianism in Egypt, and the role of liminality in revolutions more generally.”—Jessica Winegar, Northwestern University