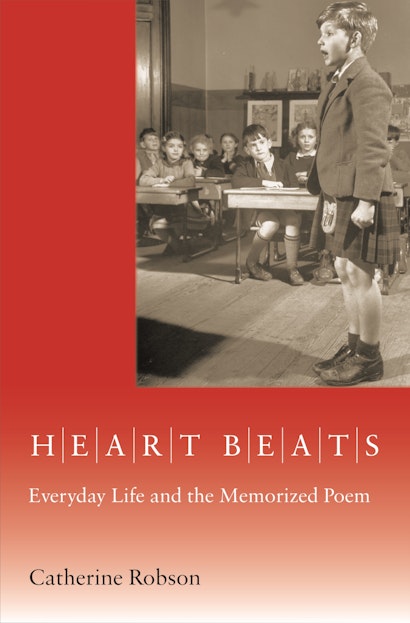 Many people in Great Britain and the United States can recall elderly relatives who remembered long stretches of verse learned at school decades earlier, yet most of us were never required to recite in class. Heart Beats is the first book to examine how poetry recitation came to assume a central place in past curricular programs, and to investigate when and why the once-mandatory exercise declined. Telling the story of a lost pedagogical practice and its wide-ranging effects on two sides of the Atlantic, Catherine Robson explores how recitation altered the ordinary people who committed poems to heart, and changed the worlds in which they lived.

Heart Beats begins by investigating recitation’s progress within British and American public educational systems over the course of the nineteenth and twentieth centuries, and weighs the factors that influenced which poems were most frequently assigned. Robson then scrutinizes the recitational fortunes of three short works that were once classroom classics: Felicia Hemans’s “Casabianca,” Thomas Gray’s “Elegy Written in a Country Churchyard,” and Charles Wolfe’s “Burial of Sir John Moore after Corunna.” To conclude, the book considers W. E. Henley’s “Invictus” and Rudyard Kipling’s “If — ,” asking why the idea of the memorized poem arouses such different responses in the United States and Great Britain today.


Focusing on vital connections between poems, individuals, and their communities, Heart Beats is an important study of the history and power of memorized poetry.

Catherine Robson is is professor of English at New York University. She is the author of Men in Wonderland: The Lost Girlhood of the Victorian Gentleman (Princeton).

"It's tempting to sentimentalize an era in which poetry—memorized, recited poetry—held so prominent a place in the culture. But its once-substantial role turns out to be a mixed and complicated tale, as thoroughly chronicled [by] Catherine Robson."—Brad Leithauser, NewYorker.com

"Catherine Robson's extraordinary book, a feat of imagining as well as of scholarship, explores the memorization and reciting of poems in classrooms across England and America through substantial portions of the last two centuries."—William H. Pritchard, Weekly Standard

"I hope that books like Catherine Robson's brilliant Heart Beats: Everyday Life and the Memorized Poem will mark a turning point in the history of our discipline. Written with a lightness of touch but a depth of commitment . . . lively, fresh and insightful . . . thoughtful and meticulous."—Chris Jones, Times Higher Education

"Robson develops her arguments with a delicious range of references."—Julie Blake, English in Education

"Robson does far more than give us the institutional history of verse memorization, though she does this fascinatingly well. She interrogates what performed memorization means for the study of poetry, reception, and canonization."—James Najarian, European Romantic Review

"Heart Beats invites further research, and should have a significant impact on Victorian studies for some time to come."—Kirstie Blair, Tennyson Research Bulletin

"For a wonderfully dispassionate guide to this debate, there is no better book . . . Neither sentimentalist nor cynic, Robson traces the glory days of the memorised poem from the late 18th century to the Second World War."—C. P. Nield, Standpoint

"[T]he result of [Robson's] meticulousness is hardly modest; on the contrary, Heart Beats is a brilliantly original book that dares to raise riveting, if sometimes unanswerable, questions about long-forgotten children, half-remembered lessons, and the power of the memorized poem."—Angela Sorby, Modern Language Quarterly

"Heart Beats is a work of passionate intelligence—sensitive to issues of class and to the place of recitation in the disciplining of minds and bodies, but at the same time open to the idea that verse memorization can liberate and shape social practices for the better."—John O. Jordan, University of California, Santa Cruz

"Robson's history of memorized poetry is impressive in every way: imaginatively conceived and massively researched, it holds important implications for the way we teach and read."—Leah Price, Harvard University

"This innovative book gives an institutional history of memorizing poetry in nineteenth- and early twentieth-century schools, and provides an account of the psychological effects of this practice in the lives of students who memorized. A key scholarly book in the field, this book is a winner."—Linda Peterson, Yale University