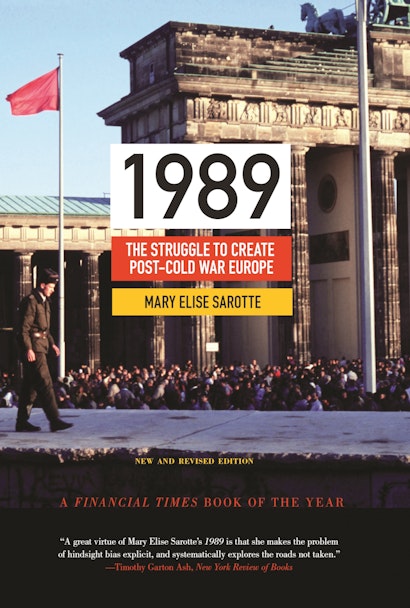 1989 explores the momentous events following the fall of the Berlin Wall and the effects they have had on our world ever since. Based on documents, interviews, and television broadcasts from Washington, London, Paris, Bonn, Berlin, Warsaw, Moscow, and a dozen other locations, 1989 describes how Germany unified, NATO expansion began, and Russia got left on the periphery of the new Europe.

This updated edition contains a new afterword with the most recent evidence on the 1990 origins of NATO’s post-Cold War expansion.

Mary Elise Sarotte is Visiting Professor of Government and History at Harvard University and Dean's Professor of History at the University of Southern California. She is a member of the Council on Foreign Relations and the author of The Collapse: The Accidental Opening of the Berlin Wall.

"Sarotte's focus is on Germany. . . . [She] describes a host of competing conceptions of post-cold-war Europe that flourished, mutated and perished in the maelstrom of events that led up to German unity. . . . Two decades later . . . [t]here are still nuclear missiles aimed across the continent. It's hard to imagine that it could have been otherwise—but, Sarotte shows us, it could have been."—Paul Hockenos, New York Times Book Review

"A great virtue of Mary Elise Sarotte's 1989 is that she makes the problem of hindsight bias explicit, and systematically explores the roads not taken."—Timothy Garton Ash, New York Review of Books

"Much the most exciting of these books is Mary Elise Sarotte's 1989. In contrast to the other authors, Sarotte treats the uprisings and collapses of that year as a prelude to the biggest change of all: 'the struggle to create post-Cold War Europe', as her subtitle puts it. . . . Sarottte [is] a lucid and compelling writer."—Neal Ascherson, London Review of Books

"The author embeds her interpretation in a sharp-eyed, fluent narrative of 1989-1990 that sees the realpolitik behind the stirring upheavals. . . . [S]he offers a smart and canny analysis of the birth of our not-so-new world order."—Publishers Weekly

"Mary Elise Sarotte's 1989 . . . shows why this post-Cold War world, and not a different one, came out of the dramatic events of 1989, and why the result was bound to pit the U.S. against Russia again in the twenty-first century."—George Packer, NewYorker.com

"A hugely impressive study that looks beyond 1989 to the many-faceted battle to shape the new Europe."—Gerard DeGroot, Washington Post

"Sarotte's book is compact and highly interpretive. Yet Sarotte has thoroughly mastered the original source material in all the key countries. She distills it with great skill, constantly enlivening her account with a sensibility for what these changes meant in life and culture. Hers is now the best one-volume work on Germany's unification available. It contains the clearest understanding to date of the extraordinary juggling performance of Kohl."—Philip D. Zelikow, Foreign Affairs

"[A] scrupulous account of the high politics and diplomacy of 1989. With remarkable diligence, [Sarotte] has interviewed almost all the surviving participants, and quarried government archives and other libraries for documents that illustrate the decision-making (and lack of it) that year. The result is a tale of hypocrisy and indecision in high places."—Economist

"The tragic hero of 1989, for Sarotte, is Gorbachev. He was, and is still seen by many Russians as a King Lear figure: a man prepared to give away what he should have retained to a west bent on extracting as much as possible from the Soviet collapse—under the cover of honeyed words and rhetoric of a new age."—John Lloyd, Financial Times

"[1989] is a work of coruscating intelligence and inspired scholarship that brims with provocative conclusions, well-argued and documented. It will appeal to casual readers and scholars alike who want to revisit how history turned on its hinges 20 years ago."—Mike Leary, Philadelphia Inquirer

"Sarotte's readable and reliable diplomatic history will no doubt take its place as the classic overview of this period. It is sensible, balanced, and well documented, drawing on what is now an extensive international body of primary and secondary sources."—Andrew Moravcsik, Foreign Affairs

"Your humble blogger's all-time favorite historian, Mary Elise Sarotte, has just published her magnum opus, 1989, about the fall of the Berlin Wall and the year of diplomacy that led to a reunified Germany ensconced within NATO and the European Union."—Dan Drezner, Foreign Policy blog

"Mary Sarotte's 1989, shows how the Wall's opening was not planned but was the immediate consequence of a bungled press conference by an East German official."—Mitchell Cohen, Dissent

"[A] fresh analysis of the year's events and their after-effects."—Megan O'Grady, Vogue.com

"This is a cracker of a read, a fast-paced policy study of a year that transformed Europe and the world. Mary Elise Sarotte sets out how fairly standard politicians saw the chance to extend democracy and the market economy throughout the Soviet empire and took it. . . .This is a book for everybody who understands that politics is the application of policy and, when done well, can transform the world for the better."—Australian

"[A] truly great book. . . . [A] whodunit of world politics that uses sources from Germany, the USA, Russia and other countries to reveal both the details and the drama of the year of German unification in an unprecedented fashion."—Stefan Kornelius, Süddeutsche Zeitung

"Sarotte has a good feel for the internal politics of all four external powers which, as a result of the 1945 settlement, had a continuing stake in Berlin and the broader issue of Germany's fate. But she is especially good on Germany."—Archie Brown, History Today

"'On November 9, 1989, the Berlin Wall opened and the world changed.' With this simple statement, Sarotte begins her timely, highly readable book in which she revisits the remarkable events in Europe between November 1989 and the end of 1990, with a focus on Germany. . . . Stimulating reading for a general audience, students, and faculty/researchers."—Choice

"Sarotte's outstanding book shows that Europe's prefab post-1989 order was a messy improvisation, but at no point during the collapse of communism did conditions favourable to the alternatives cohere."—Richard Gowan, International Journal

"[1989] is widely and deeply-researched, gracefully written, and admirably concise. I especially liked the author's ability to express the human dimensions of her story by combining an analysis of big issues and long range trends with carefully-chosen vignettes and contemporary quotations. The book is full of astute and totally convincing judgments."—James Sheehan, H-Diplo Roundtable Reviews

"This book sets the record straight on several issues [and] popular misconceptions and exposes the truth behind the positions of the major players. It is a valuable book that helps understand the international political power play."—Vaidehi Nathan, Organiser

"Sarotte's book . . . conveys a much-needed appreciation that history, even at its hinges, is anything but simple."—William W. Finan, Current History

"Mary Elise Sarotte's . . . lucid and thoughtful book . . . very effectively combines a detailed historical narrative with a conceptual framework which clarifies the significance of what happened, and of what failed to happen."—Roger Morgan, International Affairs

"The prose and style are lucid. . . . [1989] is valuable to students, academics and general readers alike in learning more about these epochal happenings. . . . [T]his is an excellent work which is likely to become a key text for this period."—Alex Spelling, Diplomacy and Statecraft

"[T]his book truly underscores the necessity of entering a post-triumphalist phase in writing the history of what came after the Wall came down. This book provides a wonderful example of how an enlightened diplomatic history can contribute to this endeavor."—Andreas W. Daum, Central European History

"Sarotte skillfully weaves short biographical paragraphs into her diplomatic history. These grant the reader some insight into the persons actually involved. The added juicy details and lucid style also make her study more attractive than the average diplomatic history. Her digressions . . . are nice to read and a welcome break from the many descriptions of diplomatic meetings and their political outcomes (although cleverly and eloquently written). . . . In conclusion, the book deals with exciting times in an exciting way."—Mare van den Eeden, European Review of History

"The lion's share of Sarotte's book is directed toward the struggle between the US and the USSR and provides a fresh and insightful interpretation of Germany and the rebuilding of Europe. 1989 sheds light on many dark chapters of the past that continue to influence the present global political system."—Lior Alperovich, Israel Journal of Foreign Affairs

"Using multiple data from interviews with historical figures involved, biographies and extensive archival sources, she recounts the conversations, communiqués and personalities central to the events. This is a major contribution to scholarship in this field."—Larry Ray, European History Quarterly

"[A] superb book, reading both easy and rewarding, demonstrating that despite the difficulties inherent in the writing of contemporary history (especially access to sources), an innovative and important work is possible."—Olivier Schmitt, War Studies Publications

"Mary Sarotte's 1989 reinterprets, in a striking manner, the end of the Cold War in Europe. Based on extensive multiarchival research, it suggests a Bismarckian preeminence for West German chancellor Helmut Kohl in driving the course of events. All students of this subject will henceforth have to grapple with this provocatively persuasive argument."—John Lewis Gaddis, Yale University, author of The Cold War

"Sarotte makes an essential contribution to the literature on the revolutions of 1989. Her focus is on Europe and Germany, East and West, in the context of the international system. The research is stunning, including new archival sources and revealing interviews with the historical figures involved. Her narrative is fast-paced—like the events themselves—and highly readable. Scholars, students, and the informed public at large will enjoy and learn a lot from this impressive book."—Norman M. Naimark, Stanford University, author of Fires of Hatred

"Challenging conventional wisdom, Mary Sarotte questions why the West opted to extend existing Euro-Atlantic structures east in the wake of German unification, instead of creating a new system that would have included Moscow. Based on new archival material and extensive interviews with participants in these events, she argues convincingly that the United States and its partners missed a one-time opportunity to devise a post-Cold War architecture that would have made Europe more secure."—Angela Stent, Georgetown University, author of Russia and Germany Reborn

"Sarotte has written a major book about one of the most important events at the end of the Cold War—the international negotiations which culminated in the unification of Germany. Notably, she has managed to get access to primary sources that would be the dream of any historian. She vividly describes the efforts of powerful individuals to create order out of fast-moving and chaotic circumstances. This is a terrific book."—A. James McAdams, University of Notre Dame, author of Germany Divided