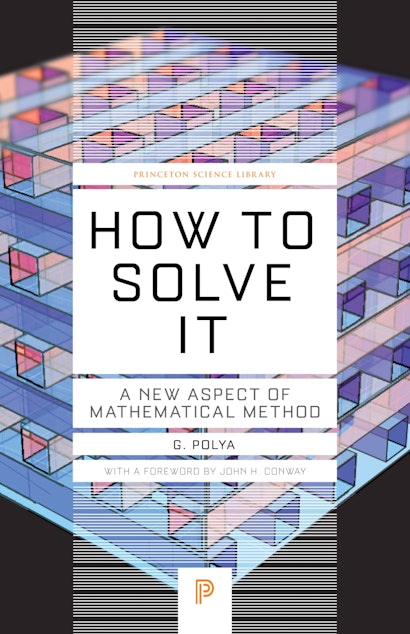 A perennial bestseller by eminent mathematician G. Polya, How to Solve It will show anyone in any field how to think straight. In lucid and appealing prose, Polya reveals how the mathematical method of demonstrating a proof or finding an unknown can be of help in attacking any problem that can be “reasoned” out—from building a bridge to winning a game of anagrams. Generations of readers have relished Polya’s deft—indeed, brilliant—instructions on stripping away irrelevancies and going straight to the heart of the problem.

George Polya (1887–1985) was one of the most influential mathematicians of the twentieth century. His basic research contributions span complex analysis, mathematical physics, probability theory, geometry, and combinatorics. He was a teacher par excellence who maintained a strong interest in pedagogical matters throughout his long career. Even after his retirement from Stanford University in 1953, he continued to lead an active mathematical life. He taught his final course, on combinatorics, at the age of ninety. John H. Conway (1937-2020) was professor emeritus of mathematics at Princeton University. He was awarded the London Mathematical Society's Polya Prize in 1987. He was interested in many branches of mathematics and invented a successor to Polya's notation for crystallographic groups.

"Every prospective teacher should read it. In particular, graduate students will find it invaluable. The traditional mathematics professor who reads a paper before one of the Mathematical Societies might also learn something from the book: 'He writes a, he says b, he means c; but it should be d.'"—E. T. Bell, Mathematical Monthly

"[This] elementary textbook on heuristic reasoning, shows anew how keen its author is on questions of method and the formulation of methodological principles. Exposition and illustrative material are of a disarmingly elementary character, but very carefully thought out and selected."—Herman Weyl, Mathematical Review

"I recommend it highly to any person who is seriously interested in finding out methods of solving problems, and who does not object to being entertained while he does it."—Scientific Monthly

"Any young person seeking a career in the sciences would do well to ponder this important contribution to the teacher's art."—A. C. Schaeffer, American Journal of Psychology

"Every mathematics student should experience and live this book"—Mathematics Magazine

"In an age that all solutions should be provided with the least possible effort, this book brings a very important message: mathematics and problem solving in general needs a lot of practice and experience obtained by challenging creative thinking, and certainly not by copying predefined recipes provided by others. Let's hope this classic will remain a source of inspiration for several generations to come."—A. Bultheel, European Mathematical Society