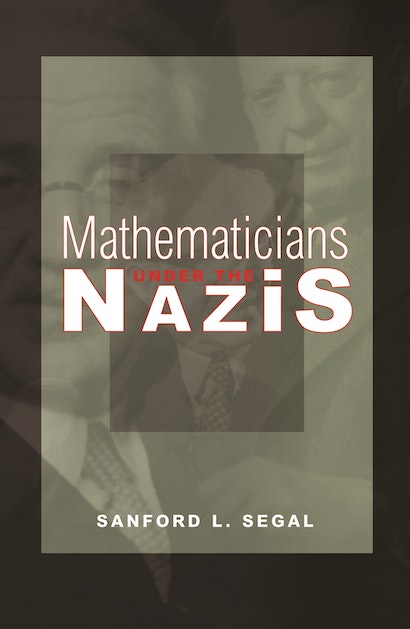 
The effects of the Nazi regime on the lives of mathematicians ranged from limitations on foreign contact to power struggles that rattled entire institutions, from changed work patterns to military draft, deportation, and death. Based on extensive archival research, Mathematicians under the Nazis shows how these mathematicians, variously motivated, reacted to the period’s intense political pressures. It details the consequences of their actions on their colleagues and on the practice and organs of German mathematics, including its curricula, institutions, and journals. Throughout, Segal’s focus is on the biographies of individuals, including mathematicians who resisted the injection of ideology into their profession, some who worked in concentration camps, and others (such as Ludwig Bieberbach) who used the “Aryanization” of their profession to further their own agendas. Some of the figures are no longer well known; others still tower over the field. All lived lives complicated by Nazi power.


Presenting a wealth of previously unavailable information, this book is a large contribution to the history of mathematics — as well as a unique view of what it was like to live and work in Nazi Germany.

Sanford L. Segal is Professor of Mathematics at the University of Rochester and the author of Nine Introductions in Complex Analysis.

"The strength of the book lies in its many individual stories and case histories. . . . [It] offer[s] disturbing and important accounts of the life of science and scientists under the Nazis."—The Economist

"The remarkable feature of this book is that in spite of the temptation, the story-telling never succumbs to simplistic descriptions of events or people. The analysis avoids the sentimentality and moral superiority that so often accompany descriptions of the Nazi years. . . . Perhaps this is why Mathematicians under the Nazis is so compelling. . . . This is a perceptive analysis of an important era and well worth reading."—John H. Ewing, Mathematical Reviews

"A fascinating, well-researched and richly footnoted account of what occurred within a scientific discipline during the Nazi period."—George G. Szpiro, The Jerusalem Report

"Segal must be commended for the enormous amount of research he has done in arriving at an accurate picture of the complexity of the situation faced by mathematicians during the Nazi regime. Avoiding stereotypes and oversimplification, he presents fascinating information and valuable insights to those interested in mathematicians and to people interested in the history of Nazi Germany."—Walter Noll, Carnegie Mellon University