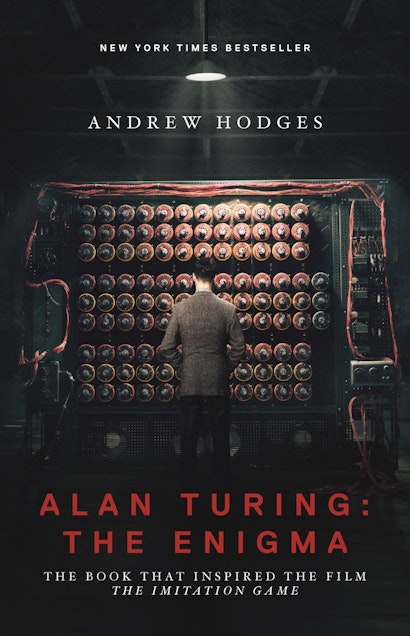 It is only a slight exaggeration to say that the British mathematician Alan Turing (1912-1954) saved the Allies from the Nazis, invented the computer and artificial intelligence, and anticipated gay liberation by decades — all before his suicide at age forty-one. This New York Times–bestselling biography of the founder of computer science, with a new preface by the author that addresses Turing’s royal pardon in 2013, is the definitive account of an extraordinary mind and life.


Capturing both the inner and outer drama of Turing’s life, Andrew Hodges tells how Turing’s revolutionary idea of 1936 — the concept of a universal machine — laid the foundation for the modern computer and how Turing brought the idea to practical realization in 1945 with his electronic design. The book also tells how this work was directly related to Turing’s leading role in breaking the German Enigma ciphers during World War II, a scientific triumph that was critical to Allied victory in the Atlantic. At the same time, this is the tragic account of a man who, despite his wartime service, was eventually arrested, stripped of his security clearance, and forced to undergo a humiliating treatment program — all for trying to live honestly in a society that defined homosexuality as a crime.


The inspiration for a major motion picture starring Benedict Cumberbatch and Keira Knightley, Alan Turing: The Enigma is a gripping story of mathematics, computers, cryptography, and homosexual persecution.

Andrew Hodges teaches mathematics at the University of Oxford.

"One of the finest scientific biographies ever written."—Jim Holt, New Yorker

"Andrew Hodges' 1983 book Alan Turing: The Enigma, is the indispensable guide to Turing's life and work and one of the finest biographies of a scientific genius ever written."—Michael Hiltzik, Los Angeles Times

"Turing's rehabilitation from over a quarter-century's embarrassed silence was largely the result of Andrew Hodges's superb biography, Alan Turing: The Enigma (1983; reissued with a new introduction in 2012). Hodges examined available primary sources and interviewed surviving witnesses to elucidate Turing's multiple dimensions. A mathematician, Hodges ably explained Turing's intellectual accomplishments with insight, and situated them within their wider historical contexts. He also empathetically explored the centrality of Turing's sexual identity to his thought and life in a persuasive rather than reductive way."—Michael Saler, Times Literary Supplement

"On the face of it, a richly detailed 500-page biography of a mathematical genius and analysis of his ideas, might seem a daunting proposition. But fellow mathematician and author Hodges has acutely clear and often extremely moving insight into the humanity behind the leaping genius that helped to crack the Germans' Enigma codes during World War II and bring about the dawn of the computer age. . . . This melancholy story is transfigured into something else: an exploration of the relationship between machines and the soul and a full-throated celebration of Turing's brilliance, unselfconscious quirkiness and bravery in a hostile age."—Sinclair McKay, Wall Street Journal

"A first-class contribution to history and an exemplary work of biography."—I. J. Good, Nature

"An almost perfect match of biographer and subject. . . . [A] great book."—Ray Monk, Guardian

"A superb biography. . . . Written by a mathematician, it describes in plain language Turing's work on the foundations of computer science and how he broke the Germans' Enigma code in the Second World War. The subtle depiction of class rivalries, personal relationships, and Turing's tragic end are worthy of a novel. But this was a real person. Hodges describes the man, and the science that fascinated him—which once saved, and still influences, our lives."—Margaret Boden, New Scientist

"Andrew Hodges's biography is a meticulously researched and written account detailing every aspect of Turing's life. . . . This account of Turing's life is a definitive scholarly work, rich in primary source documentation and small-grained historical detail."—Mathematics Teacher

"[A] really excellent biography. . . . The great thing about this book is that the author is a mathematician and can explain the details of Turing's work—as a scientist, mathematician, and a code breaker—in a way that is easy to understand. He is also wonderful at the emotional nuance of Alan's life, who was a somewhat odd—a student was assigned to him in school to help him maintain a semblance of tidiness in his appearance, rooms and school work and at Bletchley Park he was known for chaining his tea mug to a pipe—but he was also charming and intelligent and Hodges brings all the aspects of his personality and life into sharp focus."—Off the Shelf

"This book is an incredibly detailed and meticulously researched biography of Alan Turing. Reading it is a melancholy experience, since you know from the outset that the ending is a tragic one and that knowledge overshadows you throughout. While the author divides the text into two parts, it actually reads like a play in four acts. . . . This book is Turing's memorial, and one that does justice to the subject."—Katherine Safford-Ramus, MAA Reviews

"The new paperback edition of the 1983 book that inspired the film, with an updated introduction by Oxford mathematics professor Andrew Hodges, is an exhilarating, compassionate and detailed biography of a complicated man."—Jane Ciabattari, BBC

"If [The Imitation Game] does nothing else but send you, as it did me, to Alan Hodges's Alan Turing: The Enigma (1983, newly prefaced in the 2014 Princeton University Press edition) it more than justifies its existence. A great read, Hodges's intellectual biography depicts Turing as a brilliant mathematician; a crucial pioneering figure in the theorization and engineering of digital computing; and the biggest brain in Bletchley Park's Hut #8."—Amy Taubin, Artforum

"It is indeed the ultimate biography of Alan Turing. It will bring you as close as possible to his enigmatic personality."—Adhemar Bultheel, European Mathematical Society

"A book whose time has finally come. I found it to be a page-turner in spite of the occasionally esoteric explanations of mathematical theories that reminded of why Brooklyn Technical High School was not the wisest choice for me."—Terrance, Paris Readers Circle

"Thanks to the movie The Imitation Game, Alan Turing has emerged from history's shadows, where his memory had languished for decades. For anyone whose interest in the pioneering computer scientist, mathematician, and logician was piqued by the film, the book that served as the film's source material, Andrew Hodges's exhaustive biography Alan Turing: The Enigma, has the answers."—Frank Caso, Simply Charly

"One of the finest scientific biographies I've ever read: authoritative, superbly researched, deeply sympathetic, and beautifully told."—Sylvia Nasar, author of A Beautiful Mind

"A captivating, compassionate portrait of a first-rate scientist who gave so much to a world that in the end cruelly rejected him. Perceptive and absorbing, Andrew Hodges's book is scientific biography at its best."—Paul Hoffman, author of The Man Who Loved Only Numbers

"A remarkable and admirable biography."—Simon Singh, author of The Code Book and Fermat's Enigma

"A first-rate presentation of the life of a first-rate scientific mind.... It is hard to imagine a more thoughtful and compassionate portrait of a human being."—from the Foreword by Douglas Hofstadter