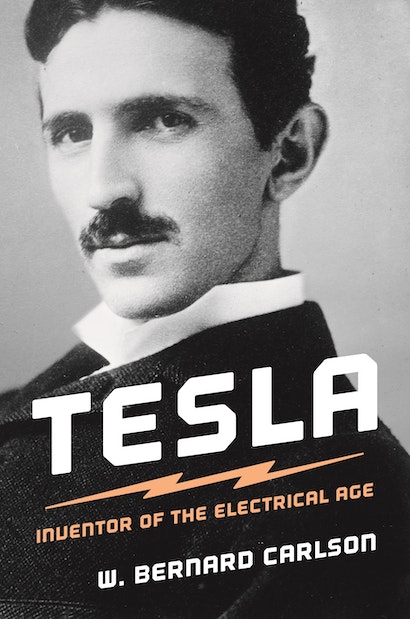 Nikola Tesla was a major contributor to the electrical revolution that transformed daily life at the turn of the twentieth century. His inventions, patents, and theoretical work formed the basis of modern AC electricity, and contributed to the development of radio and television. Like his competitor Thomas Edison, Tesla was one of America’s first celebrity scientists, enjoying the company of New York high society and dazzling the likes of Mark Twain with his electrical demonstrations. An astute self-promoter and gifted showman, he cultivated a public image of the eccentric genius. Even at the end of his life when he was living in poverty, Tesla still attracted reporters to his annual birthday interview, regaling them with claims that he had invented a particle-beam weapon capable of bringing down enemy aircraft.

Plenty of biographies glamorize Tesla and his eccentricities, but until now none has carefully examined what, how, and why he invented. In this groundbreaking book, W. Bernard Carlson demystifies the legendary inventor, placing him within the cultural and technological context of his time, and focusing on his inventions themselves as well as the creation and maintenance of his celebrity. Drawing on original documents from Tesla’s private and public life, Carlson shows how he was an “idealist” inventor who sought the perfect experimental realization of a great idea or principle, and who skillfully sold his inventions to the public through mythmaking and illusion.

This major biography sheds new light on Tesla’s visionary approach to invention and the business strategies behind his most important technological breakthroughs.

W. Bernard Carlson is professor of science, technology, and society in the School of Engineering and Applied Science and professor of history at the University of Virginia. His books include Technology in World History and Innovation as a Social Process: Elihu Thomson and the Rise of General Electric, 1870-1900.

"[An] assiduous, endlessly patient biography. . . . In Carlson's eyes, Tesla's relationship with modernity in all its forms—its fixation with progress and explanation, capital and connection, but also its fragmentation of narrative and self—is more complex and revealing than even the conspiracy nuts have imagined."—Richard Barnett, London Review of Books

"Carlson sheds light on the man and plenty of his inventions. . . . [An] electric portrait."—Publishers Weekly

"Superb. . . . Carlson brings to life Tesla's extravagant self-promotion, as well as his eccentricity and innate talents, revealing him as a celebrity-inventor of the 'second industrial revolution' to rival Thomas Alva Edison."—W. Patrick McCray, Nature

"Soundly footnoted, yet eminently readable, it provides a balanced examination of the man and his work, focusing particularly on Tesla's distinctive style of invention."—Natural History

"A scholarly, critical, mostly illuminating study of the life and work of the great Serbian inventor."—Kirkus Reviews

"Carlson even has something to teach readers familiar with Seifer's dissection of Tesla's tortured psyche in Wizard (2001) and O'Neill's much earlier chronicle of Tesla's childhood and early career in Prodigal Genius (1944). Carlson provides not only a more detailed explanation of Tesla's science but also a more focused psychological account of Tesla's inventive process than do his predecessors. Carlson also surpasses his predecessors in showing how Tesla promoted his inventions by creating luminous illusions of progress, prosperity, and peace, illusions so strong that they finally unhinge their creator. An exceptional fusion of technical analysis of revolutionary devices and imaginative sympathy for a lacerated ego."—Bryce Christensen, Booklist

"This is a fascinating glimpse into the life of a monumental inventor whose impact on our contemporary world is all too unfamiliar to the general public. Carlson relates the science behind Tesla's inventions with a judicial balance that will engage both the novice and the academic alike. Highly recommended to serious biography buffs and to readers of scientific subjects."—Brian Odom, Library Journal

"Run, don't walk, to buy this book for the Nikola Tesla cultist in your life. . . . [Carlson] is the first trained academic historian of technology to approach this topic, and he snaps the intense, romantic Serb back into his proper context."—Colby Cosh, Maclean's Magazine

"Carlson takes a historian's approach to piecing together Tesla's life. He resists the temptation to focus only on Tesla's persona as an eccentric genius with a flair for drama. . . . Instead, Carlson sets out to answer three questions: 'How did Tesla invent? How did his inventions work? And what happened as he introduced his inventions?'"—Maggie Fazeli Fard, Washington Post

"Required reading for any would-be innovator."—Christine Evans-Pughe, Engineering and Technology

"Carlson has written an exhaustive biography of Tesla, remarkable for its breadth and thoroughness. He explores and details all his major inventions, providing illustrations and in some cases even reproductions of the patent applications. This is as fair and balanced a biography of Tesla as one could hope for, no mean feat for a man so full of contradictions."—Gino Segre, Physics in Perspective

"Historian Carlson . . . has at last written a balanced and nuanced scholarly treatment of Tesla in the technical and social contexts of his time. . . . Carlson's easy-to-read style and almost flawless exposition of technical matters will make this book attractive for everyone from general readers to engineers and historians. It is well illustrated and indexed with extensive footnotes. This book is likely to become the standard scholarly biography of Tesla for decades to come."—Choice

"Since the death of Nikola Tesla in 1943, his life has deserved a worthy biography. Bernard Carlson has delivered that in Tesla: Inventor of the Electrical Age, which portrays Tesla as intensely human. . . . Anyone, whether simply an interested reader or a professional historian, engineer, or physicist, will finish Tesla with a deepened understanding of his world, character, and accomplishments."—Robert Rosenberg, Physics Today

"This major biography sheds new light on Tesla's visionary approach to invention and the business strategies behind his most important technological breakthroughs."—World Book Industry

"The author Bernard Carlson has put a herculean effort in presenting a detailed biographical study of one of the greatest engineer-scientists of human history, Nikola Tesla. . . . The book may be treated as a benchmark by future biographers of inventors and scientists."—Mainak Sengupta, Current Science

"It is a very readable work and presents the whole picture of Tesla both as an electrical wizard and as a human being with all the associated foibles. I particularly liked the way Carlson interspersed the narrative with commentary on the inventive process, the role of illusion, and the social implications of his technologies on bringing about positive changes in society as a whole. If you wish to read a factual book about Tesla, this is the one."—Eric P. Wenaas, IEEE Technology and Society Magazine

"[Readers] will certainly see this volume as an indispensable guide to one of the most fascinating yet controversial and misunderstood innovators of the modern era."—Graeme Gooday, Metascience

"[A] masterly study of the man and his work, explaining how business interests as well as scientific curiosity drove Tesla. Carlson shows how engineers, just as much as artists, benefit from creativity, imagination and idealism."—Roger Backhouse, Journal of the Society of Model & Experimental Engineers

"[T]his is an enjoyable biography of Tesla, concentrating in detail on his engineering achievements and business arrangements, even though it could have been firmer on the unscientific nature of some of Tesla's ideas."—Brian Clegg, Popular Science

"The most objective and balanced Tesla biography to date."—Tibi Puiu, ZME Science

"Tesla is a tour de force of sound scholarship and cogent analysis that brings to life one of the most eccentric and enigmatic characters in the history of technology."—Michael Brian Schiffer, Register of The Kentucky Historical Society

"An eminently readable history that, while avoiding hagiography, reconstructs the intellectual development of one of history's great electrical inventors and the social contexts in which he worked."—Benjamin Gross, Chemical Heritage

"Carlson's book is likely the definitive biography of Tesla. It is a challenging read, but a rewarding one. It also contributes in the wider context to the reinvention of scientific biography as a prism of cultural history."—Guillaume de Syon, Canadian Journal of History

"Carlson's book stands out compared with previous Tesla biographies. . . . The result is an eminently readable history that, while avoiding hagiography, reconstructs the intellectual development of one of history's great electrical inventors and the social contexts in which he worked."—Benjamin Gross, Chemical Heritage

"Dr. Carlson has written an outstanding work, exhibiting a true understanding of the complex person who was Nikola Tesla. The book is alternatively uplifting—as it reveals how Tesla's mind worked, creating prototypes of inventions which have changed the world—and heartbreaking. . . . The book is much more than a biography, as Carlson examines the art of invention as it applied to Tesla. He skillfully weaves into the narrative insights as to why Tesla approached his work in the way he did."—John Bowditch, Technology and Culture

"Only the bravest of historians elects to take on the challenge of writing a scholarly biography of Tesla that examines and critiques such fondly cherished myths. And Bernie Carlson is certainly up to this challenge. . . . [A]n indispensable guide to one of the most fascinating yet controversial and misunderstood innovators of the modern era."—Graeme Gooday, Metascience

"[Carlson's] extensive notes on his sources are invaluable for Tesla researchers, and his book sheds light on many misconceptions perpetuated in some popular Tesla biographies."—Nexus Magazine

"The problem for any biographer is that there are really two distinctly different Nikola Teslas. One is the towering genius shunned by the ignorant establishment, whose greatest works are still suppressed; this is the Tesla adored by the alternative science community and the popular media. . . . The other Tesla is the miserable failed inventor whose great plans and endless boasts came to nothing. . . . Carlson manages the impressive feat of steering a middle course between these two."—David Hambling, Fortean Times

"The great strength of Carlson's biography is that, throughout his account of these complex developments, he tries to evaluate Tesla’s work and behaviour without falling into the twin perils of hero-worship or skepticism. . . . Carlson’s biography not only provides us with an account of a man whose achievements amazed the world and contributed significantly to the emergence of the electrical age. It is also provides valuable insights into the way in which innovation can be projected into the popular media and arouse the interest of financiers."—Peter J. Bowler, European Legacy

"Carlson has written a serious, rigorous book grounded in the academic history of technology, but also a page-turner that any fan of Tesla will enjoy."—Robert MacDougall, Western University

"Nikola Tesla, like one of his oscillators, flickered between different states so quickly that they can easily blur. Carlson captures this extraordinary, contradictory life—inventor, futurist visionary, showman, and, at times, ranting narcissist. We get to see how Tesla scrambled like mad, built with ambition, and in his later efforts failed monumentally. Here is a book that guides us through this wild ride with empathy and without hagiography."—Peter Galison, Harvard University

"Combining archival research with the latest scholarship from the history of technology, Carlson has written the balanced, scholarly biography that Nikola Tesla has long deserved. This is the definitive study of his life and work."—David E. Nye, University of Southern Denmark

"Most biographies of Tesla lack technical background and are uncritical and adulatory in their approach. Carlson's perspective as a historian—particularly a historian of technology—is indispensable for understanding Tesla's place in the rapidly changing American society of the late nineteenth and early twentieth centuries. His style is engaging and accessible, and the book will clearly be of value to the historical community."—Bernard S. Finn, curator emeritus, Smithsonian Institution

"Tesla is a tour de force of scholarship and analysis. This is the definitive work on Tesla that brings to light much new information about his life, his inventions, and the changing socioeconomic context in which he worked. Carlson has mined the primary sources to an unprecedented depth and breadth. The book is nothing less than extraordinary."—Michael Brian Schiffer, author of Power Struggles: Scientific Authority and the Creation of Practical Electricity before Edison