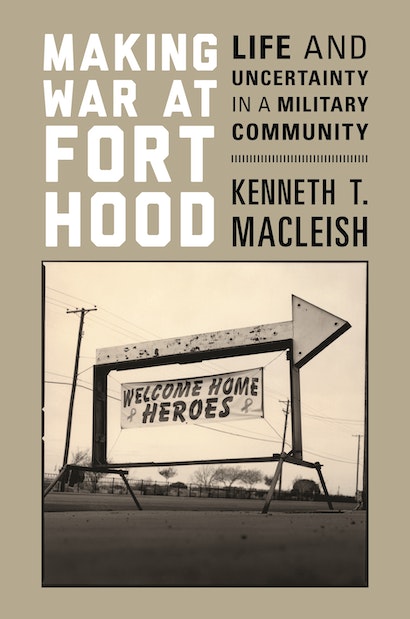 Making War at Fort Hood offers an illuminating look at war through the daily lives of the people whose job it is to produce it. Kenneth MacLeish conducted a year of intensive fieldwork among soldiers and their families at and around the US Army’s Fort Hood in central Texas. He shows how war’s reach extends far beyond the battlefield into military communities where violence is as routine, boring, and normal as it is shocking and traumatic.

Fort Hood is one of the largest military installations in the world, and many of the 55,000 personnel based there have served multiple tours in Iraq and Afghanistan. MacLeish provides intimate portraits of Fort Hood’s soldiers and those closest to them, drawing on numerous in-depth interviews and diverse ethnographic material. He explores the exceptional position that soldiers occupy in relation to violence — not only trained to fight and kill, but placed deliberately in harm’s way and offered up to die. The death and destruction of war happen to soldiers on purpose. MacLeish interweaves gripping narrative with critical theory and anthropological analysis to vividly describe this unique condition of vulnerability. Along the way, he sheds new light on the dynamics of military family life, stereotypes of veterans, what it means for civilians to say “thank you” to soldiers, and other questions about the sometimes ordinary, sometimes agonizing labor of making war.

Making War at Fort Hood is the first ethnography to examine the everyday lives of the soldiers, families, and communities who personally bear the burden of America’s most recent wars.

"MacLeish writes eloquently. . . . [T]his portrait of Army life on American turf is a welcome change of pace from the recent surge of battle-focused narratives."—Publishers Weekly

"In bringing troops from the background to the front where they belong, this book should be required reading for Bush, Dick Cheney, Donald Rumsfeld and anyone else responsible for sending soldiers to that folly in the desert. They should read it before they go to bed and when they wake up. MacLeish has shown them, and us, what we do to others when we send them to fight our wars."—James T Crouse, Times Higher Education

"Making War at Fort Hood is an ambitious, provocative book. It will be of significant value to historians of contemporary military conflicts, the organizational culture of the U.S. Army, and the lived experience of war. . . . It is an important work that deserves attention."—Jacqueline Whitt, H-Net Reviews

"Making War at Fort Hood is essential reading for those with an interest in modern Army life and for those in leadership positions."—Lieutenant Colonel G. Alan Knight, Journal of Army History

"In Making War at Fort Hood, Kenneth MacLeish . . . draws on interviews with [returning soldiers] and members of their families in an ethnographic exploration of the impact of deployment on their everyday lives. . . . MacLeish documents, often poignantly, the difficulties soldiers have in making sense of their experiences and in moving on."—Dr. Glenn Altschuler, Florida Courier

"The real thrust of [Making War at Fort Hood] is to show the American public—insulated from having to care greatly by an all-volunteer army and battles being fought on credit—that it nonetheless bears responsibility for the violence being done abroad and at home in its name."—ForeWord

"To its great credit, MacLeish's project refuses to paint soldiers as either noble heroes or unwitting victims, two of the most dominant and therefore the most tired archetypes of our time. In a society that has exoticized and abstracted the military, MacLeish re-humanizes it. He is also remarkably precise in how he describes the institution of the Army: how its various bureaucracies, all geared at least tangentially toward killing people and destroying property, prescribe and encompass so many aspects of a soldier's life, from the most consequential to the seemingly benign, such as haircut styles and family day picnics. MacLeish's book is smart, necessary, and insightful."—Brian Van Reet, Daily Beast

"The book illuminates the impact that two wars over a 12-year period can have on deployed soldiers, their families and their community."—San Antonio Express-News

"Drawing on observations and interviews conducted during a year at Fort Hood, this ethnography provides a poignant account of military life, especially the impact of war on U.S. soldiers and their families. . . . This concise, engaging, and well-referenced text is a welcome addition to the field of military ethnography."—Choice

"MacLeish offers us something richer: a sensitively rendered portrait of social actors who both do and do not get to choose their course, who force us to rethink basic notions of agency and autonomy from the vantage point of violence as a way of life."—Marcel La Flamm, Public Books

"In this theoretically rich, empathic, and revelatory ethnography, Kenneth MacLeish ably tackles the challenges that face all US anthropologists who engage with the military. . . . The book is impressive and engaging in theoretical terms. . . . MacLeish has made an incisive contribution to military anthropology that will be of particular value to students of violence, care, US society, or fine ethnographic writing."—Keith Brown, Great Plains Research

"Making War at Fort Hood is a powerful, beautifully written book that brings to life the permanent vulnerability and bafflement of suffering soldiers and their families. As MacLeish tracks what it means to have a life amid war's threat to it, he listens hard to the stories, detailing the comic and tragic genres people invent to make sense of things as they veer between snapping and being stunned. The emotional life of the soldier is here memorably, richly chronicled."—Lauren Berlant, University of Chicago

"For the residents of Fort Hood, Texas, 'deployment' is in the symptoms of post-traumatic stress disorder, including infidelity, divorce, abuse, and drugs. It's also in the ordinary life of waiting, recovering, dreading. It's in the mile-long row of strip malls, fast-food chains, and auto-parts stores on the main street of Killeen. It's in death by speeding on the widows' highway the day after returning from war. Kenneth MacLeish's Making War at Fort Hood is a profound investigation not only of war in the present moment but of the precariousness of life."—Kathleen C. Stewart, University of Texas, Austin

"This is one of the most valuable books I have read in a long time. Making War at Fort Hood delivers a close, convincing, and moving portrait of soldiers' lives. It demonstrates impressive intellectual depth and at the same time is ethnographically rich. The whole country needs to learn from this book."—Alan Klima, University of California, Davis

"An ethnographic study of the everyday lives of soldiers and their families, Making War at Fort Hood tackles profound questions of trauma and bodily experience, debt, love, accountability, separation and return, in a community constituted by the routine presence of war. I love this book. It is beautifully written, poignant and compelling, illuminating and sensitive. This is an extraordinarily timely and important work."—Mary Steedly, Harvard University