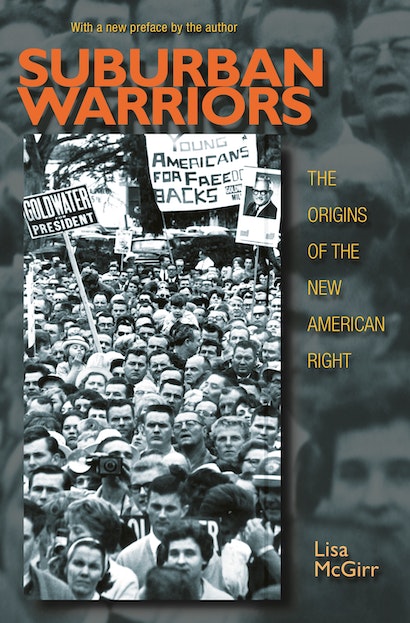 In the early 1960s, American conservatives seemed to have fallen on hard times. McCarthyism was on the run, and movements on the political left were grabbing headlines. The media lampooned John Birchers’s accusations that Dwight Eisenhower was a communist puppet. Mainstream America snickered at warnings by California Congressman James B. Utt that “barefooted Africans” were training in Georgia to help the United Nations take over the country. Yet, in Utt’s home district of Orange County, thousands of middle-class suburbanites proceeded to organize a powerful conservative movement that would land Ronald Reagan in the White House and redefine the spectrum of acceptable politics into the next century.


Suburban Warriors introduces us to these people: women hosting coffee klatches for Barry Goldwater in their tract houses; members of anticommunist reading groups organizing against sex education; pro-life Democrats gradually drawn into conservative circles; and new arrivals finding work in defense companies and a sense of community in Orange County’s mushrooming evangelical churches. We learn what motivated them and how they interpreted their political activity. Lisa McGirr shows that their movement was not one of marginal people suffering from status anxiety, but rather one formed by successful entrepreneurial types with modern lifestyles and bright futures. She describes how these suburban pioneers created new political and social philosophies anchored in a fusion of Christian fundamentalism, xenophobic nationalism, and western libertarianism.


While introducing these rank-and-file activists, McGirr chronicles Orange County’s rise from “nut country” to political vanguard. Through this history, she traces the evolution of the New Right from a virulent anticommunist, anti-establishment fringe to a broad national movement nourished by evangelical Protestantism. Her original contribution to the social history of politics broadens—and often upsets—our understanding of the deep and tenacious roots of popular conservatism in America.

Lisa McGirr is professor of history at Harvard University.

"Suburban Warriors affords a rare picture of the grass-roots process actually working at a specific site. . . . McGirr's setting is California's Orange County, which became America's most celebrated conservative stronghold in the 1960s. McGirr's book provides a valuable scholarly analysis of the demographics, culture, and history that made the county distinctively conservative."—Russell Baker, New York Review of Books

"McGirr paints a complex picture . . . Incisive, yet fair, this represents an important standing of how antimodernist ideologies continue to thrive."—Publishers Weekly

"A fascinating tale . . . Suburban Warriors goes a long way to explaining the origins of a movement whose influence remains formidable to this day."—Stephen Dale, Washington Post Book World

"Orange County's success as a crucible for conservatism, McGirr skillfully argues, was rooted in the fact that it took tried and true American values of individualism and community, boldly exaggerated them and then recombined them in ways that accentuated their messy contradictions. . . . McGirr blends political and social history and goes where few analysts before: to the kitchen tables as well as the meeting halls of the early right-wing movement. This is the book's great contribution."—Arlene Stein, The Nation

"The best book yet written about the local insurgencies that dumped liberal Republicanism into the dustbin of history and made the GOP party of Ronald Reagan and Newt Gingrich."—Michael Kazin, Lingua Franca

"Well written and authoritative, enriched by the voices of the Orange County conservatives [McGirr] interviewed and by deep archival research."—Mark Schmitt, American Prospect

"The strength of her book is her explanation of the growth of the conservative movement through the stories of women and men who moved to the Orange County suburbs . . . Remember welfare? Whatever happened to it? Where did affirmative action go? [McGirr explains] their demise and that of many other ideas that seemed so permanent, so much a part of a national consensus, in 1964."—Bill Boyarski, Los Angeles Times

"Suburban Warriors is an excellent example of the value of combining political with community history."—Mary C. Brennan, The Journal of American History

"Should be read by anyone interested in American political developments of the last four decades. . . This is a fair-minded book from which both the Right and its opponents could learn a great deal."—Duane Oldfield, Journal of Church and State

"[McGirr] treats her subject with commendable fairness . . . deeply informed with dozens of interviews and serious archival work. . . . Suburban Warriors is a welcome addition to contemporary American history. It is the first long look at activists who have been woefully understudied given their influence on the course of recent politics.""—Brian Doherty, Reason

"A focused, stimulating account that demonstrates that many of the best contemporary works of the Sixties are about the rise of the Right."—Library Journal

"McGirr is enlightening, offering much solid research on the devoted berserkers who seized the Republican Party in 1964 to foist Goldwater on an unwelcoming nation. . . . McGirr has uncovered something important about the activists of the right.""—Todd Gitlin, Boston Review

"A landmark study that will enlighten anyone who cares about the evolution of American politics since World War II. With Lisa McGirr's thorough, sophisticated, smoothly crafted exploration of Orange County conservatism, the history of the modern Right has finally come of age."—Michael Kazin, Georgetown University, coauthor of America Divided and The Populist Persuasion

"In her impressively researched, gracefully written book, Lisa McGirr convincingly demonstrates that historians, who have been preoccupied with the Left in the 1960s, need to develop a deeper comprehension of how conservatives in places such as Orange County reconfigured American political culture. Readers will find her attempt to understand them, rather than dismiss or condemn them, both rewarding and challenging."—William E. Leuchtenburg, University of North Carolina at Chapel Hill

"Something happened to the Republican Party in the 1960s, changing it forever. How did a crypto-liberal, Northeast-dominated, establishment-oriented party become a populist, counter-liberal crusade? Here's the story: exhaustively researched and presented with telling analysis and narrative verve."—Kevin Starr, State Librarian of California