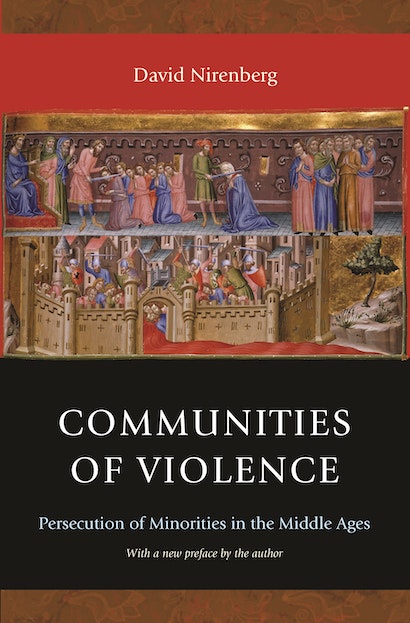 In the wake of modern genocide, we tend to think of violence against minorities as a sign of intolerance, or, even worse, a prelude to extermination. Violence in the Middle Ages, however, functioned differently, according to David Nirenberg. In this provocative book, he focuses on specific attacks against minorities in fourteenth-century France and the Crown of Aragon (Aragon, Catalonia, and Valencia). He argues that these attacks — ranging from massacres to verbal assaults against Jews, Muslims, lepers, and prostitutes — were often perpetrated not by irrational masses laboring under inherited ideologies and prejudices, but by groups that manipulated and reshaped the available discourses on minorities. Nirenberg shows that their use of violence expressed complex beliefs about topics as diverse as divine history, kinship, sex, money, and disease, and that their actions were frequently contested by competing groups within their own society.


Nirenberg’s readings of archival and literary sources demonstrates how violence set the terms and limits of coexistence for medieval minorities. The particular and contingent nature of this coexistence is underscored by the book’s juxtapositions — some systematic (for example, that of the Crown of Aragon with France, Jew with Muslim, medieval with modern), and some suggestive (such as African ritual rebellion with Catalan riots). Throughout, the book questions the applicability of dichotomies like tolerance versus intolerance to the Middle Ages, and suggests the limitations of those analyses that look for the origins of modern European persecutory violence in the medieval past.

David Nirenberg is the Deborah R. and Edgar D. Jannotta Professor of Medieval History and Social Thought at the University of Chicago, where he is also dean of the Division of the Social Sciences and the founding director of the Neubauer Family Collegium for Culture and Society.

"Nirenberg's argument is elegant and precise.... [His] superb scholarship has done a great service in a matter of great importance, and not only to historians."—Edward Peters, Historian

"[This book] is written with a stylistic flair that makes it a pleasure to read, a model of historical research and exposition at its best."—Marc Saperstein, American Historical Review

"Nirenberg has ventured unescorted down all manner of unexplored paths.... This is a highly sophisticated piece of work, clever in the best sense of the word, rich and variegated, a treasure-house of perceptive scholarship, sensitively nuanced, beautifully controlled, a delight to handle and a joy to read."—Peter Linehan, Medium Aevum