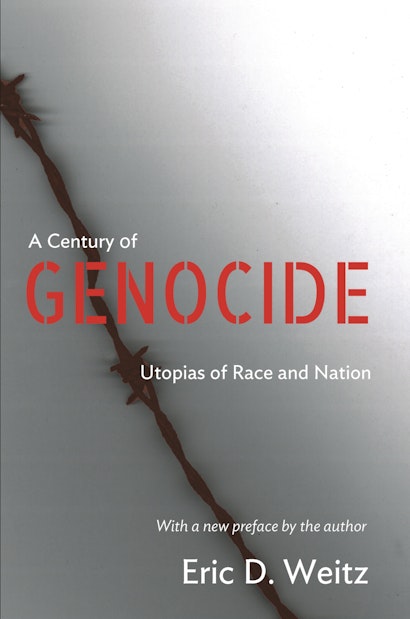 Why did the twentieth century witness unprecedented organized genocide? Can we learn why genocide is perpetrated by comparing different cases of genocide? Is the Holocaust unique, or does it share causes and features with other cases of state-sponsored mass murder? Can genocide be prevented?

Blending gripping narrative with trenchant analysis, Eric Weitz investigates four of the twentieth century’s major eruptions of genocide: the Soviet Union under Stalin, Nazi Germany, Cambodia under the Khmer Rouge, and the former Yugoslavia. Drawing on historical sources as well as trial records, memoirs, novels, and poems, Weitz explains the prevalence of genocide in the twentieth century — and shows how and why it became so systematic and deadly.

Weitz depicts the searing brutality of each genocide and traces its origins back to those most powerful categories of the modern world: race and nation. He demonstrates how, in each of the cases, a strong state pursuing utopia promoted a particular mix of extreme national and racial ideologies. In moments of intense crisis, these states targeted certain national and racial groups, believing that only the annihilation of these “enemies” would enable the dominant group to flourish. And in each instance, large segments of the population were enticed to join in the often ritualistic actions that destroyed their neighbors.

This book offers some of the most absorbing accounts ever written of the population purges forever associated with the names Stalin, Hitler, Pol Pot, and Milosevic. A controversial and richly textured comparison of these four modern cases, it identifies the social and political forces that produce genocide.

Eric D. Weitz (1953–2021) was Distinguished Professor of History at City College and the Graduate Center, City University of New York. He was also the author of A World Divided: The Global Struggle for Human Rights in the Age of Nation-States; Weimar Germany: Promise and Tragedy, which was named a New York Times Book Review Editor’s Choice; and Creating German Communism, 1890–1990: From Popular Protests to Socialist State (all Princeton).

"There is much new in Weitz's analysis and his isolation of the common mechanisms of state-sponsored genocide is an invaluable contribution to the literature on the subject. . . . Despite its analytical and reasoned approach, this work cannot be read without feeling outrage, despair and horror. Weitz's work raises profound questions about the human capacity for violence."—Publishers Weekly

"A Century of Genocide has much to offer. It will serve as an excellent first introduction to Lenin and Stalin's crimes, the Holocaust, the Cambodian massacres of the 1970s and the ethnic cleansing in Yugoslavia."—Brendon Simms, Times Higher Education Supplement

"[A] book that must be read and that must be argued over. Without an understanding of the issues [it] tackle[s] with passion and in depth, the desire to intervene—to prevent ethnic cleansing or genocide—is meaningless."—Rima Berns-McGown, International Journal

"Weitz has produced something exceedingly rare: a scholarly book one cannot put down. This is a meritorious, thoughtful book."—Choice

"Weitz makes a persuasive case that these genocides were not simply anarchic eruptions of age-old hatreds, but rather were engineered by crisis-ridden regimes promoting utopian visions requiring a radical refashioning of the population."—Martin Farrell, Perspectives on Politics

"This important, highly thoughtful book is a welcome addition to the growing literature on genocide in the twentieth century. It deserves a wide audience among scholars, undergraduates, and policy makers. Broad ranging, genuinely comparative, rigorous, and learned, A Century of Genocide is engagingly written, while prudent and balanced in its judgments."—Frank Chalk, Slavic Review

"Weitz does an admirable job . . . of providing a useful introduction to four of the most widely known genocides of the twentieth century."—Paul Nienkamp, MCU Journal

"In his well-documented comparative account of five mass killings in the twentieth century, Eric Weitz has uniquely perceived the ideological connections and analogous revolutionary crises that resulted in 'a century of genocide.' Not only does his book demonstrate that human rights safeguards are indispensable for preventing human rights disasters, but it will help identify early warnings of future crimes against humanity."—David Weissbrodt, coauthor of International Human Rights and Member, United Nations Sub-Commission on the Promotion and Protection of Human Rights

"This ambitious and broad-ranging study of genocide in the twentieth century is one of the most illuminating works of comparative history to appear in recent years. It shows in graphic and sometimes gut-wrenching detail how a vicious combination of racist ideology, power hungry leadership, and a popular willingness to participate in mass murder can result in the most appalling crimes against humanity. We can hope to prevent genocide only if we understand it, and this book is a major contribution to such an awareness."—George M. Fredrickson, author of Racism: A Short History

"This is a passionate, persuasive, and elegantly argued study of the genocidal policies and behavior of four twentieth-century regimes that are rarely systematically compared."—David Chandler, author of Brother Number One: A Political Biography of Pol Pot

"Weitz brings a wealth of learning and understanding to the problem of genocide. His book is sensible and even-handed all the way through, breaking free of staid categories of analysis. Innovative and refreshing in tone, it traces its devastating story right down to the local level, where, after all, genocide happens."—Robert Gellately, author of Backing Hitler: Consent and Coercion in Nazi Germany

"Eric Weitz's Century of Genocide is a model of comparative history. Brilliantly organized around the themes of race and nation, it keenly analyzes both the similarities and differences between the genocidal regimes of Hitler's Germany and Pol Pot's Cambodia and the genocidal actions of Stalin's Soviet Union and Milosevic's Greater Serbia."—Christopher Browning, author of Ordinary Men: Reserve Police Battalion 101 and the Final Solution in Poland