Winner of the Pulitzer Prize, the National Book Award, the Bancroft Prize, and the Parkman Prize

From acclaimed diplomat and historian George Kennan, a landmark history of the crucial months in 1917–1918 that forged the pattern of Soviet-American relations 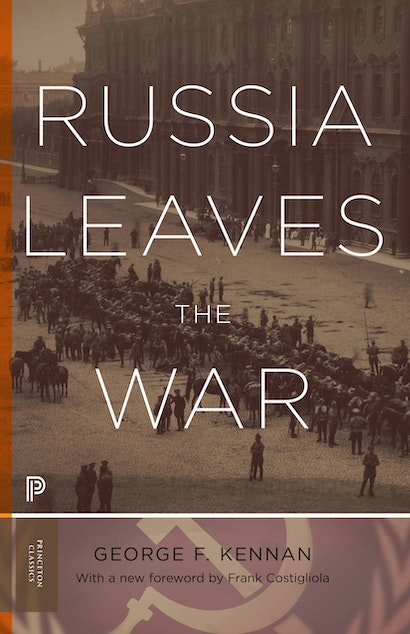 When the Bolsheviks seized power in November 1917, American diplomats in St. Petersburg and Moscow were thrown into a bewildering situation. Should the new regime be recognized? What was its true nature? And was there any way to keep Russia fighting against Germany in the Great War? In vivid detail, George Kennan’s classic history tells the gripping story of the Americans’ furious, and ultimately failed, efforts to strike a deal to keep the Soviets in the war—and how these events set the pattern of future relations between the two emerging superpowers. In a new introduction, Kennan biographer Frank Costigliola puts the book in the context of the its cold war publication and Kennan’s life.

George F. Kennan (1904–2005) was an American diplomat and historian. After retiring from the State Department, he joined the Institute for Advanced Study in Princeton. Frank Costigliola is a Board of Trustees Distinguished Professor of History at the University of Connecticut. His books include Kennan: A Life between Worlds (Princeton) and The Kennan Diaries.

"Kennan is a poet as well as a philosopher. The Russia of 1917 comes alive under his persuasive touches."—Harrison E. Salisbury, New York Times

"A work of great scholarship and perception. . . . So tangled a diplomatic story has never been more clearly told."—The Times (London)

"This is live history, resurrected from the dead past by a man with profound understanding of the practical and theoretical side of world diplomacy."—Earl H. Voss, Washington Star

"Kennan has produced not only a unique diplomatic history, but an exciting piece of literature in which all the personalities come to life."—American Scholar

"A book of the first importance. . . . Brilliant."—Robert Blake, The Spectator

"Kennan’s carefully documented book contains brilliant pen-portraits of the American diplomats and would-be diplomats as well as of the Bolshevik leaders. . . . It abounds in dramatic episodes. . . . Offers many vital lessons for the present and the future."—Ernest S. Pisko, Christian Science Monitor

"Kennan’s book is both an outstanding literary achievement and a major contribution to the history of Soviet-American relations."—Michael Karpovich, American Political Science Review

"As a careful and thoughtful examination of a fateful period in human history and of the reaction of the United States to an overwhelming social phenomenon, this book has a substantial and a lasting value."—Dexter Perkins, American Historical Review

"A work of the greatest possible interest."—Max Beloff, Russian Review