A revolutionary approach to how we view Europe's prehistoric culture 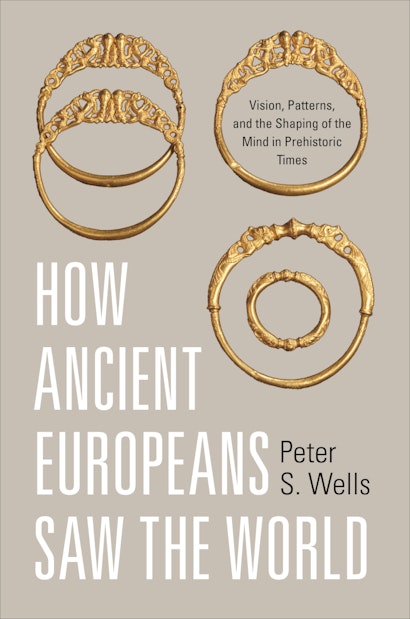 The peoples who inhabited Europe during the two millennia before the Roman conquests had established urban centers, large-scale production of goods such as pottery and iron tools, a money economy, and elaborate rituals and ceremonies. Yet as Peter Wells argues here, the visual world of these late prehistoric communities was profoundly different from those of ancient Rome’s literate civilization and today’s industrialized societies. Drawing on startling new research in neuroscience and cognitive psychology, Wells reconstructs how the peoples of pre-Roman Europe saw the world and their place in it. He sheds new light on how they communicated their thoughts, feelings, and visual perceptions through the everyday tools they shaped, the pottery and metal ornaments they decorated, and the arrangements of objects they made in their ritual places—and how these forms and patterns in turn shaped their experience.

How Ancient Europeans Saw the World offers a completely new approach to the study of Bronze Age and Iron Age Europe, and represents a major challenge to existing views about prehistoric cultures. The book demonstrates why we cannot interpret the structures that Europe’s pre-Roman inhabitants built in the landscape, the ways they arranged their settlements and burial sites, or the complex patterning of their art on the basis of what these things look like to us. Rather, we must view these objects and visual patterns as they were meant to be seen by the ancient peoples who fashioned them.

Peter S. Wells is professor of anthropology at the University of Minnesota. His many books include Barbarians to Angels: The Dark Ages Reconsidered and The Barbarians Speak: How the Conquered Peoples Shaped Roman Europe (Princeton).

"Archaeologist Wells takes a novel approach to exploring the way Bronze and Iron Age societies in Europe (2000BCE to 1CE) viewed themselves. Through analysing their artifacts, pottery, fibulae, swords and scabbards, and coins, as well as the arrangements of their graves and their public places, the author plausibly suggests that their views changed through time."—Choice

"It is evident that Wells is constantly conscious of the fact that he is writing for a modem 'literate' person to who words are more important than visuals. He has explained every single object, without going on jargons. An interesting history of Europe."—R. Balashankar, Organiser

"How Ancient Europeans Saw the World offers a completely new approach to the study of Bronze Age and Iron Age Europe, and represents a major challenge to existing views about prehistoric cultures."—World Book Industry

"Wells presents thought-provoking ideas about Bronze Age and Iron Age Europeans. This book will stimulate further research on a very challenging topic, that is, the mindset of past populations. The extensive bibliography is very useful for archaeologists interested in this type of research."—Sarunas Milisauskas, Historian

"This book is thought-provoking; its broad geographical scope is particularly relevant in this post-credit-crunch world where European integration is once more on the agenda."—Laura Slack, Time & Mind

"Peter Wells adopts an entirely new approach to the later centuries of European prehistory. He opens our eyes to the way in which Bronze Age and Iron Age people viewed their world, drawing on current work in material culture studies to present us with a dynamic picture of the visual life of late prehistory. This book will revolutionize the way we think about the Iron Age."—Anthony Harding, University of Exeter

"We think it modern to be trapped in an impersonal world by the convenience of mass-produced commodities, yearning for the individual crafts and communities that graced an earlier, more human era. In his new book on the visual experiences and perceptions of pre-Roman societies in central and western Europe, Peter Wells teaches us that this dilemma is not uniquely modern; it has happened before. In fact before the Roman Empire expanded into northwestern Europe the people of regions far beyond the empire had surrendered an economy of individualizing crafts to mass production, preparing themselves materially for their eventual military conquest. How Ancient Europeans Saw the World is an intriguing book that attempts to revisualize swords and brooches, tombs and public spaces, borrowing cues from marketing research and art history to reconstruct how things appeared to the people who made and used them. It deserves a wide readership"—David W. Anthony, author of The Horse, the Wheel, and Language: How Bronze-Age Riders from the Eurasian Steppes Shaped the Modern World

"This is a remarkable piece of scholarship. Wells takes the discussion of prehistoric Europe's complex material culture back to first principles, along the way shedding much of the interpretive baggage of several previous generations of scholars. He also provides an example of how an archaeological topic can be approached with clarity and logic. This book will arouse controversy and debate."—Peter Bogucki, author of The Origins of Human Society

"This is a most important book. Wells argues that after 200 BC Eurasia moved generally toward the mass production and consumption of artifacts and that this changed people's relationships with the world, in turn altering the nature of experience. How Ancient Europeans Saw the World is thought-provoking and provocative."—Chris Gosden, author of Prehistory: A Very Short Introduction