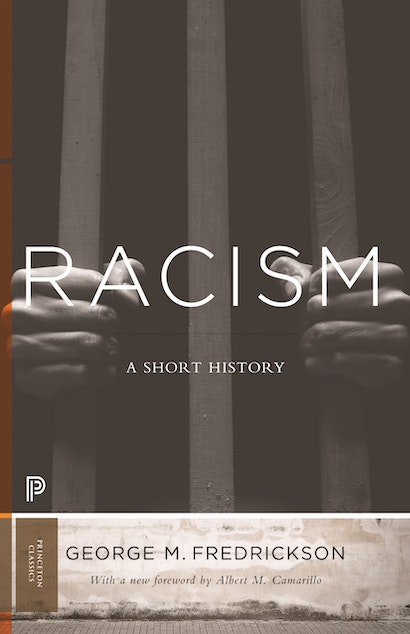 Are antisemitism and white supremacy manifestations of a general phenomenon? Why didn’t racism appear in Europe before the fourteenth century, and why did it flourish as never before in the eighteenth and nineteenth centuries? Why did the twentieth century see institutionalized racism in its most extreme forms? Why are egalitarian societies particularly susceptible to virulent racism? What do apartheid South Africa, Nazi Germany, and the American South under Jim Crow have in common? How did the Holocaust advance civil rights in the United States?

With a rare blend of learning, economy, and cutting insight, George Fredrickson surveys the history of Western racism from its emergence in the late Middle Ages to the present. Beginning with the medieval antisemitism that put Jews beyond the pale of humanity, he traces the spread of racist thinking in the wake of European expansionism and the beginnings of the African slave trade. And he examines how the Enlightenment and nineteenth-century romantic nationalism created a new intellectual context for debates over slavery and Jewish emancipation.

Fredrickson then makes the first sustained comparison between the color-coded racism of nineteenth-century America and the antisemitic racism that appeared in Germany around the same time. He finds similarity enough to justify the common label but also major differences in the nature and functions of the stereotypes invoked. The book concludes with a provocative account of the rise and decline of the twentieth century’s overtly racist regimes—the Jim Crow South, Nazi Germany, and apartheid South Africa—in the context of world historical developments.

This illuminating work is the first to treat racism across such a sweep of history and geography. It is distinguished not only by its original comparison of modern racism’s two most significant varieties—white supremacy and antisemitism—but also by its eminent readability.

"In Racism: A Short History, written in . . . [Fredrickson's] characteristically crisp, clear prose, he draws both on a wide range of recent work by others and on nearly half a century of his own writings on immigration, race and nationalism, in the United States and elsewhere, to provide us with a masterly—though not uncontroversial—synthesis. . . . The book is worth reading just for its pathbreaking attempt to tell the stories of anti-Semitism and white supremacy together, while insisting both on their inter-connections and their differences."—Kwame Anthony Appiah, The New York Times Book Review

"Fredrickson deftly combines intellectual with social and political history to explain the emergence of racism and its recent decline. Learned and elegant."—William H. McNeill, The New York Review of Books

"Fredrickson [stands] out from a number of distinguished collegues [because of] his continuing urge to widen the comparative framework he uses to try to understand why these relations have developed as they did. Racism: A Short History is his most drastic venture to date—a brisk positioning of Southern racial domination within world history as a whole."—John Dunn, Times Literary Supplement

"An erudite comparison of racism and anti-Semitism throughout Western history. . . . Fredrickson offers a scholarly but compelling and accessible narrative."—Publishers Weekly

"Fredrickson's book should be celebrated. The chief reason is the text itself. One of only a handful of attempts to cover Western attitudes towards race comprehensively, Fredrickson's Racism is by far the most concise and lucid. It is also the most balanced. . . . [W]hat ultimately makes Fredrickson's book so valuable is its original vision of the major racisms—its view of them as belonging to a coherent historical narrative. . . . Reviewers often apply the term 'path-breaking' to works that simply trim back a few errant branches. But Fredrickson's book really is path-breaking."—Paul Reitter, The Nation

"In this incisive and thoughtful essay on the nature and historical trajectory of racism in the modern world, Fredrickson's magisterial command of his subject is on display as he provides a concise overview of racism's rise, climax, and retreat."—Choice

"Racism, in short, comes with a history, and it is to scrutinize racism's history and reasoning that Fredrickson decided to write this brisk, intense, incisive probe of the concept and its implications. The result is the best, most erudite introduction to racism available."—Carlin Romano, Philadelphia Inquirer

"Racism: A Short History is a tour de force within this genre. Richly footnoted and elegantly written, the book is a model of clarity and sophisticated analysis."—Milton Shain, Kleio

"Racism: A Short History is an original synthesis of the important historical writings on racial belief systems. In this clearly written book, George Fredrickson is the first scholar to systematically examine and compare the two most dominant forms of Western racism—antisemitism and white supremacy. It is an insightful work that will be widely discussed and cited by historians and social scientists alike."—William Julius Wilson, Lewis P. and Linda L. Geyser University Professor, Harvard University

"With a master's experience, George Fredrickson has deftly laid out an apparently simple but subtle history of racial antisemitism and color-coded racial thought. In doing so, he has written a penetrating analysis that commands our close and serious attention."—Winthrop D. Jordon, University of Mississippi, author of White Over Black

"Finally we have a concise, clear, and authoritative overview of the history of racism. Covering all forms of Western racism in the modern world, this volume provides a comparative context for our teaching and research about race and racism. In a world in which 'race' has begun to be reintroduced in science and social science, the dangers inherent in this are revealed in George M. Fredrickson's admirable work."—Sander L. Gilman, Director, The Humanities Laboratory, University of Illinois, Chicago, author of Making the Body Beautiful

"Like a searchlight in the fog, this book picks out both the persistent and the changing meanings of racism as an idea and a set of practices among people of European derivation across several centuries. A compulsively readable and deeply informed overview."—John Higham, The Johns Hopkins University, author of Strangers in the Land

"This is comparative history at its best. The long historical perspective makes for interesting reading, and Fredrickson's analysis is very effective. While modern antisemitism is clearly one variant of race thinking, no one has attempted to compare systematically its manifestations in German history with the racial systems of South Africa and the United States. The comparison is illuminating. With its admirable brevity and lucid prose, the work should attract many readers."—Eric D. Weitz, author of For Race and Nation (forthcoming)

"The dean of comparative studies of race, Fredrickson has delivered a richly informed overview of the terrible, long history of racism. His contextualization will provide the historical foundation on which future analysis of racism can and will build."—Anthony William Marx, Columbia University, author of Making Race and Nation

"This outstanding book marshals scholarly learning with an impressively light touch. The book's originality lies in its successful combination of comparative and historical perspectives, which enables Fredrickson to draw connections previously overlooked in the scholarly literature. It is fascinating to read and is destined to become a classic."—Desmond King, author of Making Americans

"Combining lucidity and erudition, Fredrickson cogently situates contemporary racism as a legacy of modernity and of the rise of Europe. He sweeps away numerous misconceptions to develop a largely convincing overview of racism's resilience and menace, as well as its links to antisemitism. Every student of racism, every antiracist activist, will benefit from reading this crucial book."—Howard Winant, Temple University, author of The World is a Ghetto

"In this powerful book, George Fredrickson explores the history of racism, from its religious origins in fifteenth-century Spain, through its complex association with the Enlightenment, to its brutalizing influence on twentieth-century America, Germany, and South Africa. Few scholars could even attempt such a sweeping study, and none can match the erudition, analytic clarity, and sound judgment that Fredrickson brings to this difficult and emotional subject. A remarkable achievement by one of America's most distinguished historians."—Gary Gerstle, University of Maryland, author of American Crucible