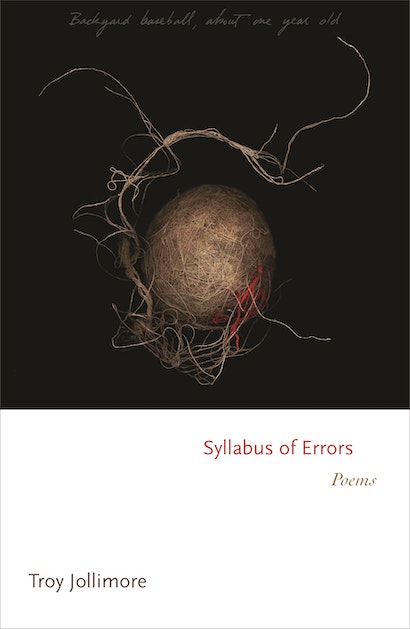 … we are fixed to perpetrate the species—

I meant perpetuate—as if our duty


were coupled with our terror. As if beauty

itself were but a syllabus of errors.

Troy Jollimore’s first collection of poems won the National Book Critics Circle Award, was hailed by the New York Times as “a snappy, entertaining book,” and led the San Francisco Chronicle to call him “a new and exciting voice in American poetry.” And his critically acclaimed second collection expanded his reputation for poems that often take a playful approach to philosophical issues. While the poems in Syllabus of Errors share recognizable concerns with those of Jollimore’s first two books, readers will also find a voice that has grown more urgent, more vulnerable, and more sensitive to both the inevitability of tragedy and the possibility of renewal.

Poems such as “Ache and Echo,” “The Black-Capped Chickadees of Martha’s Vineyard,” and “When You Lift the Avocado to Your Mouth” explore loss, regret, and the nature of beauty, while the culminating long poem, “Vertigo,” is an elegy for a lost friend as well as a fantasia on death, repetition, and transcendence (not to mention the poet’s favorite Hitchcock film). Ingeniously organized into sections that act as reflections on six quotations about birdsong, these poems are themselves an answer to the question the poet asks in “On Birdsong”: “What would we say to the cardinal or jay, / given wings that could mimic their velocities?”

Troy Jollimore is the author of two previous collections of poetry, At Lake Scugog (Princeton) and Tom Thomson in Purgatory, which won the National Book Critics Circle Award. His poems have appeared in the New Yorker, McSweeney's, the Believer, and other publications. He is a professor of philosophy at California State University, Chico.

"Equal parts craftsman, pundit, comedian, and aphorist, Jollimore applies an impressive range of skills to lift his elegiac meditations beyond simple poignancy, not the least of which are a flair for wry wordplay and the versatility to cast his 'objectified thoughts' in unanticipated directions."—Library Journal

"A philosophy professor, Jollimore provides a banquet table's worth of food for thought, but he never lets his ideas race too far ahead of his imagery, allows melancholic fatalism to submerge his acute sense of humor, or permits irony to eclipse the heartfelt sense of loss and longing at the core of his poetry."—Library Journal

"Anyone who has turned to nature in the wake of tragedy will immediately relate to the poetry in Troy Jollimore's collection Syllabus of Errors. The poems themselves makeup a series of meditations informed by bird songs, and travel from the environment populated by birds and fruit through the landscape of loss and grief. And like nature, the observer of this grief will wither, and lose, and rise renewed."—E. Ce Miller, Bustle

"From the first lyric, ‘On Birdsong,' one is captivated by Jollimore's unapologetic embrace of complex thought, of humor, doubt and praise. . . . While the poems [in Syllabus of Errors] play with rhyme and form, experiment with line length and syntax, it is the poet's vision that stands out, not his formal mastery. This, of course, is the real trick."—Meryl Natchez, ZYZZYVA

"Thanks be to the powers of serious play. Rueful, resourceful, witty, and tender, Troy Jollimore's poems are at once a triumph of virtuosity and an extraordinary tribute to the amplitude of the human heart. Tonic in their clarity of means, joyful in their engagement with form, they also bespeak the rigor of a philosophical mind. I know no living poet who has been able to pursue such large ambitions with so transparent an instrument."—Linda Gregerson, author of Prodigal: New and Selected Poems, 1976–2014