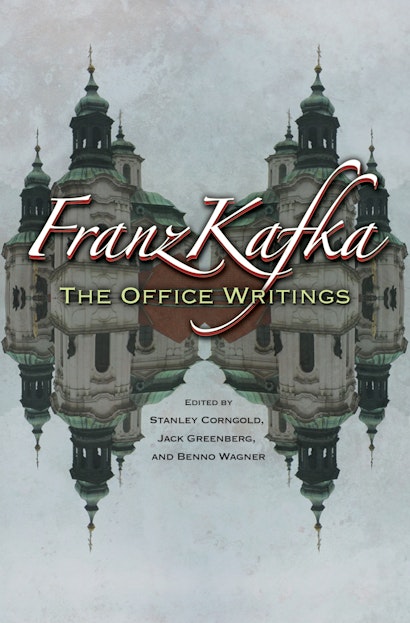 Franz Kafka: The Office Writings brings together, for the first time in English, Kafka’s most interesting professional writings, composed during his years as a high-ranking lawyer with the largest Workmen’s Accident Insurance Institute in the Czech Lands of the Austro-Hungarian Empire. Franz Kafka (1883-1924) is commonly recognized as the greatest German prose writer of the twentieth century. It is less well known that he had an established legal career. Kafka’s briefs reveal him to be a canny bureaucrat, sharp litigator, and innovative thinker on the social, political, and legal issues of his time. His official preoccupations inspired many of the themes and strategies of the novels and stories he wrote at night.

These documents include articles on workmen’s compensation and workplace safety; appeals for the founding of a psychiatric hospital for shell-shocked veterans; and letters arguing relentlessly for a salary adequate to his merit. In adjudicating disputes, promoting legislative programs, and investigating workplace sites, Kafka’s writings teem with details about the bureaucracy and technology of his day, such as spa elevators in Marienbad, the challenge of the automobile, and the perils of excavating in quarries while drunk. Beautifully translated, with valuable commentary by two of the world’s leading Kafka scholars and one of America’s most eminent civil rights lawyers, the documents cast rich light on the man and the writer and offer new insights to lovers of Kafka’s novels and stories.

Stanley Corngold is professor of German and comparative literature at Princeton University. Jack Greenberg is the Alphonse Fletcher Professor of Law at Columbia University. Benno Wagner is a professor in the Department of Literature, Media, and Culture at the University of Siegen in Germany.

"The Office Writings, however, convincingly suggests that his job was also integral to his writing, and that his literary production was not an escape from the alienation of daily life to that 'dreamlike inner life' but a striving to reconcile the two."—Alexander Provan, The Nation

"Kafka himself complained constantly that his day job at the Prague Workmen's Accident Insurance Institute oppressed his artistic calling; this volume's editors beg to differ. In the hands of Kafka scholars Stanley Corngold and Benno Wagner and the legal scholar Jack Greenberg, the 18 briefs collected here comprise more than a record of the author's years in the insurance business. By reading between his legal writings and his fiction, the editors argue that Kafka's dual identities are inextricable: the writer is informed by the lawyer, the lawyer by the writer. Franz Kafka is the Franz Kafka we know not in spite of his day job, but rather because of it."—Rachel Sugar, The National

"[T]he texts have impressive sociological merit: They provide a compelling picture of what life was like for an early twentieth-century bureaucrat who took his work seriously, believed in it, and did it well. . . . But ultimately, the value of The Office Writings lies less in the potential connections to Kafka's fiction than in the fundamental disconnect."—Ben Kafka, Bookforum

"Cognizant that some readers might be put off by the legal writing style, Corngold (German & comparative literature, Princeton Univ.), Jack Greenberg (law, Columbia Univ.), and Benno Wagner (literature, media, & culture, Univ. of Siegen, Germany) provide ample and rich analyses that demonstrate the close link between Kafka's profession and his literary creativity and oeuvre. This scholarly book is indispensable to an understanding of Kafka. Highly recommended."—Ali Houissa, Library Journal

"This event—finally, the translation and publication of the last known scrap of Kafka's work left untranslated, and unpublished—brings us to the subject of this series: how Kafka's office writings influenced his fiction, and what that influence means. Kafka's office writings, as presented here, cannot be read on their own . . . but, instead, must be read as companions, to demystify the three novels and stories (which are anything but boring). Taken together, though, both workaday fact and masterwork fiction create a network of connections that exposes not just the concerns of a single writer, but also that of a singular culture—the culture of the Office, which has imposed itself on what used to be our lives."—Joshua Cohen, Nextbook.org

"This handsome volume fills a void in Kafka studies and rectifies the unbalanced image of Kafka as a tortured genius who labored in an insurance office by day and wrote fiction by night. . . . A fascinating read for scholars of Kafka and modern Central European literature."—M. McCulloh, Choice

"These writings reveal Kafka the man at his best. For that reason, Franz Kafka: The Office Writings makes a significant contribution to understanding the enigmatic Franz Kafka."—Jefferson M. Gray, Federal Lawyer

"This volume is an important addition to our understanding and appreciation of Kafka and his work."—Harold T. Shapiro, president emeritus, Princeton University

"This carefully edited book is one of the best things to have happened to Kafka scholarship in decades. It debunks the naïve but widely accepted myth of Kafka the poet, whose work in real life had nothing to do with his literary oeuvre. Just as importantly, the book is a valuable research tool for anyone who studies the impact of modern technology on the social, legal, and political spheres in Western Europe at the beginning of the twentieth century."—Wolf Kittler, University of California, Santa Barbara

"The book adds significantly to a new image of Kafka, one that goes beyond the isolated prophet of existential despair. It reestablishes him as an important commentator on a wide range of topics, such as social institutions, political changes, and technological innovations in high industrial capitalism. It is a major contribution to cultural studies approaches to Kafka, working out the intriguing ways in which a leading modernist writer represents the spirit of his time for our own."—Rolf J. Goebel, University of Alabama, Huntsville

"Kafka's office writings, appearing here together in English for the first time, constitute a fascinating discovery. Corngold and Wagner treat readers to a surprising, new Kafka: a high-ranking, confident bureaucrat, whose legal and literary labors were closely intertwined."—John Zilcosky, University of Toronto

"This lucid and convincing book is a major contribution to the scholarship on Kafka, and on the relationship between literary creativity and professional life."—Russell Berman, Stanford University