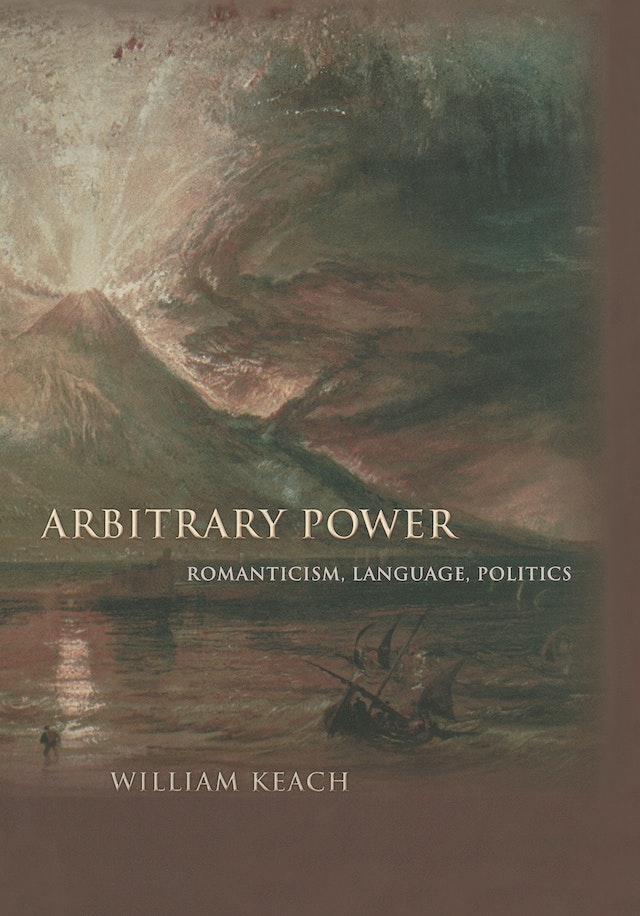 This book explores previously unexamined links between the arbitrary as articulated in linguistic theories on the one hand, and in political discourse about power on the other. In particular, Willam Keach shows how Enlightenment conceptions of the arbitrary were contested and extended in British Romantic writing. In doing so, he offers a new paradigm for understanding the recurrent problem of verbal representation in Romantic writing and the disputes over stylistic performance during this period. With clarity and force, Keach reads these phenomena in relation to a rapidly shifting literary marketplace and to the social pressures in Britain generated by the French Revolution, the Napoleonic Wars, and the class antagonisms that culminated in the Peterloo Massacre.


The question of what it means to think of language or politics as arbitrary persists through postmodern thinking, and this book advances an unfinished dialogue between Romantic culture and the critical techniques we currently use to analyze it. Keach’s intertwined linguistic and political account of arbitrary power culminates in a detailed textual analysis of the language of revolutionary violence. Including substantial sections on Blake, Wollstonecraft, Wordsworth, Coleridge, Byron, P. B. Shelley, Keats, and Anna Jameson, Arbitrary Power will engage not only students and scholars of eighteenth- and nineteenth-century literature but also those interested in critical and linguistic theory and in social and political history.

William Keach is Professor of English at Brown University. He is the author of Shelley's Style and the editor of Coleridge: The Complete Poems.

"I cannot think of a critical book that I have read in recent years that has impressed me more."—Richard Cronin, Wordsworth Circle

"William Keach has long been recognized as one of our best readers of Romantic poetry, and in this excellent book he attunes his readings to political resonances as well. He finds his way around a poem like few other critics I can think of, and he also finds the wherewithal to report on his mental travels in terms that claim originality without idiosyncrasy."—James Chandler, University of Chicago, author of England in 1819 and Wordworth's Second Nature: A Study of the Poetry and Politics

"This book offers a new synthesis between linguistic and political approaches to British Romantic poetry. It reflects very thorough research and close attention to many important authors from this period and responds judiciously to a broad range of contemporary literary criticism. William Keach is especially to be commended for his clear and thorough command of a body of linguistic theory that ranges from Locke to Saussure, following in the footsteps of Hans Aarsleff—a body of work that is absolutely essential to any understanding of Romantic speculation about language, yet all-too-little consulted by recent critics. Bringing together all of these sources of information, Arbitrary Power will be regarded as compelling, and in many respects definitive, by its readers."—James C. McKusick, University of Maryland, Baltimore County, author of Green Writing: Romanticism and Ecology