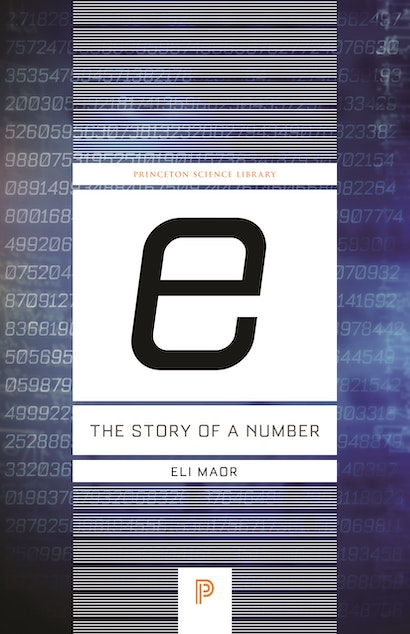 The interest earned on a bank account, the arrangement of seeds in a sunflower, and the shape of the Gateway Arch in St. Louis are all intimately connected with the mysterious number e. In this informal and engaging history, Eli Maor portrays the curious characters and the elegant mathematics that lie behind the number. Designed for a reader with only a modest mathematical background, this biography brings out the central importance of e to mathematics and illuminates a golden era in the age of science.

Eli Maor is the author of Beautiful Geometry (with Eugen Jost), Venus in Transit, Trigonometric Delights, To Infinity and Beyond, and The Pythagorean Theorem: A 4,000-Year History (all Princeton).

"This is a gently paced, elegantly composed book, and it will bring its readers much pleasure. . . . Maor has written an excellent book that should be in every public and school library."—Ian Stewart, New Scientist

"Maor wonderfully tells the story of e. The chronological history allows excursions into the lives of people involved with the development of this fascinating number. Maor hangs his story on a string of people stretching from Archimedes to David Hilbert. And by presenting mathematics in terms of the humans who produced it, he places the subject where it belongs—squarely in the centre of the humanities."—Jerry P. King, Nature

"Maor has succeeded in writing a short, readable mathematical story. He has interspersed a variety of anecdotes, excursions, and essays to lighten the flow.... [The book] is like the voyages of Columbus as told by the first mate."—Peter Borwein, Science

"Maor attempts to give the irrational number e its rightful standing alongside pi as a fundamental constant in science and nature; he succeeds very well.... Maor writes so that both mathematical newcomers and long-time professionals alike can thoroughly enjoy his book, learn something new, and witness the ubiquity of mathematical ideas in Western culture."—Choice

"It can be recommended to readers who want to learn about mathematics and its history, who want to be inspired and who want to understand important mathematical ideas more deeply."—EMS Newsletter

"[A] very interesting story about the history of e, logarithms, and related matters, especially the history of calculus. . . . [A] useful complement to a course in calculus and analysis, shedding light on some fundamental topics."—Mehdi Hassani, MAA Reviews