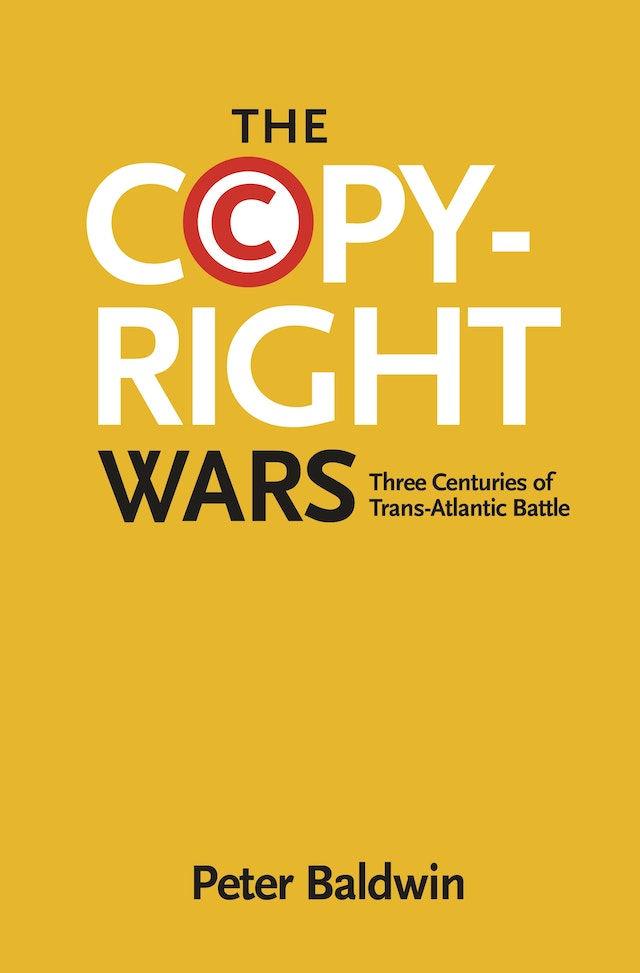 Today’s copyright wars can seem unprecedented. Sparked by the digital revolution that has made copyright—and its violation—a part of everyday life, fights over intellectual property have pitted creators, Hollywood, and governments against consumers, pirates, Silicon Valley, and open-access advocates. But while the digital generation can be forgiven for thinking the dispute between, for example, the publishing industry and Google is completely new, the copyright wars in fact stretch back three centuries—and their history is essential to understanding today’s battles. The Copyright Wars—the first major trans-Atlantic history of copyright from its origins to today—tells this important story.

Peter Baldwin explains why the copyright wars have always been driven by a fundamental tension. Should copyright assure authors and rights holders lasting claims, much like conventional property rights, as in Continental Europe? Or should copyright be primarily concerned with giving consumers cheap and easy access to a shared culture, as in Britain and America? The Copyright Wars describes how the Continental approach triumphed, dramatically increasing the claims of rights holders. The book also tells the widely forgotten story of how America went from being a leading copyright opponent and pirate in the eighteenth and nineteenth centuries to become the world’s intellectual property policeman in the late twentieth. As it became a net cultural exporter and its content industries saw their advantage in the Continental ideology of strong authors’ rights, the United States reversed position on copyright, weakening its commitment to the ideal of universal enlightenment—a history that reveals that today’s open-access advocates are heirs of a venerable American tradition.

Compelling and wide-ranging, The Copyright Wars is indispensable for understanding a crucial economic, cultural, and political conflict that has reignited in our own time.

Peter Baldwin is professor of history at the University of California, Los Angeles, and Global Distinguished Professor at New York University. 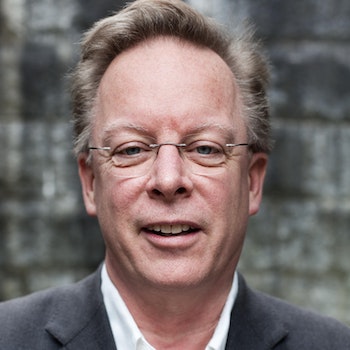 "Baldwin quite ably and thoroughly illuminates the history of copyright developments in Europe and the US."—Mark A. Fischer, Los Angeles Review of Books

"Baldwin expertly and economically records the major beats of copyright history in the last 300 years in a surprisingly focused, readable narrative. . . . In discussions ranging from the origins of copyright in 18th-century England, through the rise of 'moral rights' in Europe and the transition of the U.S. from global pirate to a net exporter of cultural works in the 19th century, to present day battles over Google Book Search and thorny legislation, such as the Stop Online Piracy Act (SOPA), Baldwin both illuminates the past and neatly sketches the contours of the battles to come."—Publishers Weekly

"Scholarly but accessible and lucid; essential for students or modern intellectual property law and of much interest to a wide audience of writers, journalists, publishers and 'content creators'."—Kirkus

"Baldwin has provided an often fascinating account of debates over intellectual property, including the defense of the moral rights of authors in Fascist Italy and Nazi Germany. Most important, Baldwin makes a compelling case that although claims to intellectual property have strengthened over the last three hundred years, they do not rest in nature. Intellectual property is, in fact, 'a contingent, socially created right, in thrall to what the lawmakers of the day' decide it is."—Huffington Post

"The overriding value of The Copyright Wars is . . . its rich history of copyright and its underlying philosophy. In particular, [Baldwin] provides a fascinating analysis of the rivalry between the US and UK conception of property rights and the continental European belief in the author's moral rights."—John Gapper, Financial Times

"Well-researched . . . full of informative and occasionally amusing history on international treaties, ideas about authorship, and why the French get so angry when we colorize old movies. A book like Baldwin's is long overdue."—Robert Levine, Columbia Journalism Review

"An excellent, scholarly study of what has gone wrong with American copyright law in the last half-century that will contribute to the ongoing debate on reforming the law."—Library Journal

"I hardly exaggerate when I say that the story leaves the reader breathless. It is not only that the range of the author's erudition is as broad as the back of a Volga boatman, but that this book succeeds in reflecting, in its tiny puddle of a specialized subject, much of what has happened in Western thinking since the French Revolution. I cannot do it justice in a brief review, because every page is a veritable kaleidoscope of historical fact, astute ratiocination, and counterintuitive paradox, a pattern as dazzling as it is bewitching."—Andrei Navrozov, Chronicles

"Baldwin's detailed scholarship is second to none, and he offers a meticulously researched summary and synthesis of these debates that manages to make sense out of three centuries of legal and political struggle. The work manages to make this struggle accessible and comprehensible to a broad audience, without sacrificing any of the important nuance and context that an understanding of the issues requires."—Hans Rollman, PopMatters

"Copyright Wars is worth a read. It reminds readers that whereas many of today's copyright issues have to do with new technology, they have deep historical and cultural roots. And the book offers one of the best collections of copyright anecdotes."—Economist

"Baldwin has a case to make. . . . an original and counterintuitive argument that could, if accepted, change the shape of conflicts over intellectual property (IP) in generaI. . . . If he is right, then the way in which we see the politics of globalization in the information economy needs to be radically revised. . . . Baldwin makes use of sources in all these countries' languages that will be largely new to the Anglophone community. Thanks to this, he is able to bring a valuable and genuinely new perspective to bear on the topic. . . . In the end, this is an important book that deserves the attention of readers interested in cultural policy, globalization, and IP debates. The argument it makes is significant and deserves to be addressed, not so much by historians as by legal experts, digital activists, authorities in international politics, and even negotiators engaged in the nitty-gritty of trade diplomacy."—Adrian Johns, H-Net

"[A] superbly researched, well-written tract on how copyright developed in England, France, Germany, and the US with a view to the moral rights of authors of creative products, the role of the potential audience, and how legislation reflects the extent of the coercive ability of the state to limit an author's personal expressive ability."—Choice

"Peter Baldwin's The Copyright Wars: Three Centuries of Trans-Atlantic Battle . . . traces the swings of power and interest between authors and their audiences in the long struggle between copyright and access. It sparkles with Baldwin's characteristic qualities: caustic and epigrammatic prose, a forensic comparative approach to differences between the US and Europe, scorn for vested interests and sloppy thinking. It has a special relevance today when corporate rights-owners are seeking in law to extend their ownership of culture in perpetuity and digital activists (and, now, academics) are fighting for open access."—Peter Mandler, History Today

"Copyright Wars is an enlightening read . . . it provides three centuries of context to today's battles of further harmonization of copyright law in the European Union, litigious heirs of copyright works and the attempts of policymakers and judges to play catch-up with the latest technology.  With MEP Julia Reda's Report on the Information Society Directive 2001/29 even suggesting copyright registration, it may be that Baldwin's historical analysis is in fact an indicator of the future direction of international copyright regulation."—Journal of Intellectual Property Law and Practice

"The Copyright Wars is an exhaustively researched epic journey through the international, historical, and present-day relationships among society, authors, disseminators . . . and the public. It presents not only the main legal developments in sweeping history over hundreds of years . . . but also a dazzling assemblage of anecdotes, historical context, quotes from obscure writings, miniutiae and ‘you are there' reports on benchmark cases. Perhaps because he is a nonlawyer writing a book of social/legal history, Baldwin is free to observe and write more like a time-travelling historical journalist, unafraid to use catchy phrases or to challenge his readers."—California Lawyer

"In the end, this is an important book that deserves the attention of readers interested in cultural policy, globalization, and IP debates. The argument it makes is significant and deserves to be addressed . . . by legal experts, digital activists, authorities in international politics, and even negotiators engaged in the nitty-gritty of trade diplomacy."—Adrian Johns, H-Net Reviews

"The Copyright Wars is an exhaustively researched epic journey through the international, historical, and present day relationships among society, authors, disseminators and the public. It presents not only the main legal developments in sweeping history over hundreds of years focusing on Britain, the United States, and continental Europe-but also a dazzling assemblage of anecdotes, historical context, quotes from obscure writings, minutiae, and ‘you are there' reports on benchmark cases."—Corey Field, California Lawyer

"[T]his is an important book that deserves the attention of readers interested in cultural policy, globalization, and IP debates. The argument it makes is significant and deserves to be addressed."—Adrian Johns, H-Net Reviews

"[A] powerful book. . . . This book deserves a wide readership, not just among librarians, but among those who care about corporate control of our cultural heritage."—Michael O. Eshleman, Law Library Journals

"Baldwin has produced an enjoyable, persuasive, and comprehensive account of a vast and complex set of historical developments. He succeeds in showing that today's ‘digital generation' is fighting a battle that ‘stretches back three centuries.'"—Robert Spoo, Journal of Modern History

"Whether or not one agrees with Mr. Baldwin's conclusions, this is a thought-provoking history lesson that provides valuable insights on today’s IP wars and how exactly we got here."—Robert Balin, Publishing Research Quarterly

"From Kant and Fichte to Wikipedia's protest shutdown and the Swedish Pirate Party, and from international copyright in the Confederacy to moral rights in Fascist Italy, Baldwin offers a riveting historical account of copyright in the Anglo-American and Continental European spheres that becomes an indispensable guide to understanding today's struggles over copyright and international trade treaties."—Yochai Benkler, Harvard Law School

"Why does current U.S. copyright sentiment accord more with the views of Jack Valenti than of Thomas Jefferson? Understanding the fault lines of copyright in the digital age means returning to the debates of the 1830s, if not to even earlier struggles at the Enlightenment's dawn. Nobody could tell the tale with more consummate skill than does Peter Baldwin in this tour de force of cultural history."—David Nimmer, author of Nimmer on Copyright

"I thought I knew what the fuss over copyright was, but this smooth, clear, and well-written book opened my eyes to completely different ways of balancing the benefits of authors vs. audiences. I was astonished to learn that today's die-hard advocates in the digital realm had their exact antecedents hundreds of years ago. And that the divergence between Europe and America reflects not geography, but a profound riddle: who should benefit most, creators or society? Despite its intensely researched and sourced text, this book is a delight to read, with news on almost every page. It is not about the tiny laws of copyright; it's about the meaning of copyright in a big way."—Kevin Kelly, Senior Maverick, Wired Magazine

"Baldwin deftly shows that the crucial copyright controversies of today are part of a much older set of controversies and that understanding today's situation is vastly enhanced by understanding its history. This is a must read."—Jimmy Wales, founder of Wikipedia

"Peter Baldwin's The Copyright Wars spans centuries and continents to reveal the background of today's battle over open access to information. Anyone who wants to understand how we arrived at this conflict should read this remarkable book."—Brewster Kahle, founder of the Internet Archive

"The creation, distribution, and enjoyment of copyrighted works often result in conflicts based on where you stand, including which side of the Atlantic Ocean you stand on. Peter Baldwin ably demonstrates why this is the case as he carefully charts the centuries-old tensions between Anglo-American and Continental European approaches to copyright."—William Patry, author of How to Fix Copyright