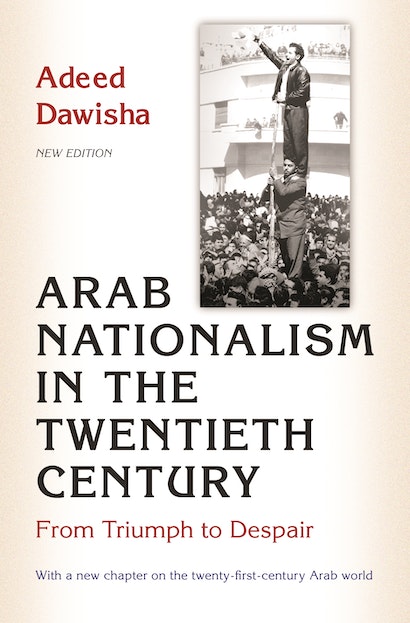 Like a great dynasty that falls to ruin and is eventually remembered more for its faults than its feats, Arab nationalism is remembered mostly for its humiliating rout in the 1967 Six Day War, for inter-Arab divisions, and for words and actions distinguished by their meagerness. But people tend to forget the majesty that Arab nationalism once was. In this elegantly narrated and richly documented book, Adeed Dawisha brings this majesty to life through a sweeping historical account of its dramatic rise and fall.


Dawisha argues that Arab nationalism — which, he says, was inspired by nineteenth-century German Romantic nationalism — really took root after World War I and not in the nineteenth century, as many believe, and that it blossomed only in the 1950s and 1960s under the charismatic leadership of Egypt’s Gamal ‘Abd al-Nasir. He traces the ideology’s passage from the collapse of the Ottoman Empire through its triumphant ascendancy in the late 1950s with the unity of Egypt and Syria and with the nationalist revolution of Iraq, to the mortal blow it received in the 1967 Arab defeat by Israel, and its eventual eclipse. Dawisha criticizes the common failure to distinguish between the broader, cultural phenomenon of “Arabism” and the political, secular desire for a united Arab state that defined Arab nationalism. In recent decades competitive ideologies — not least, Islamic militancy — have inexorably supplanted the latter, he contends.


Dawisha, who grew up in Iraq during the heyday of Arab nationalism, infuses his work with rare personal insight and extraordinary historical breadth. In addition to Western sources, he draws on an unprecedented wealth of Arab political memoirs and studies to tell the fascinating story of one of the most colorful and significant periods of the contemporary Arab world. In doing so, he also gives us the means to more fully understand trends in the region today.

Complete with a hard-hitting new and expanded section that surveys recent nationalism and events in the Middle East, Arab Nationalism in the Twentieth Century tells the fascinating story of one of the most colorful and significant periods in twentieth-century Middle Eastern history.

"A timely, illuminating and highly readable overview of the history of the Arab national movement, from its origins in the 19th century to the present. . . . [The book] not only brings events alive, but also leads to fresh assessments and a better-informed understanding of the politics of one of the world's most volatile and violent regions."—Avi Shlaim, Guardian

"Dawisha has written a fine analysis of the heyday and decline of the ideology of Arab nationalism. . . . With a sound theoretical apparatus and making good use of memoirs by those involved, Dawisha provides an excellent guide to the origins of the movement and the reality behind the rhetoric."—Choice

"[A] splendid recent obituary of the movement."—Economist

"Dawisha tackles [an] intimidatingly big subject with success. He has mastered the vast literature on the subject, weeding out the contentious or just plain wrong accounts and integrating the several good studies that get it right. Added to this is his own considerable expertise."—L. Carl Brown, Foreign Affairs

"[Dawisha] relates the many angles of this rich, complex, and multifaceted subject in a readable, lucid, and economic manner."—Israel Gershoni, American Historical Review

"Dawisha carefully navigates between various, contested historical narratives to create a balanced, authoritative historical work. He relates the many angles of this rich, complex, and multifaceted subject in a readable, lucid, and economic manner that nonspecialists will appreciate. His book is a comprehensive account of the evolution of Arab nationalism and an insightful evaluation of the role it played in shaping the modern Arab Middle East."—Israel Gershoni, American Historical Review

"[O]ne of the most comprehensive studies on pan-Arab nationalism to date."—Amaney Jamal, Political Science Quarterly

"Adeed Dawisha's highly readable, clear-eyed, and sober historical account of Arab nationalism is an important contribution to our understanding of its rapid rise to fame and equally rapid fall from grace. Combining the seasoned insights of a veteran Middle East scholar, recent scholarship, and the memoirs of Arab leaders and intellectuals, Dawisha has produced a major addition to the study of Arab nationalism and the politics of the region."—Michael Barnett, Middle East Journal

"A wonderfully insightful and analytical study of a significant political phase in the Middle East."—Jonas Kauffeldt, History: Reviews of New Books

"This book is a major intellectual advance in the study of comparative political ideologies in general, and Arab political thought in particular."—Bill S. Mikhail, Middle East Policy

"This provocative book is likely either to delight or infuriate. It will certainly delight all those who have, all along, considered Arab nationalism to be an irritant and would gleefully read its obituary set in gloating prose. But the fury of the adherents or sympathizers of Arab nationalism will be all the greater as the author lays out his case in a highly controversial and contentious manner."—Youssef M. Choueiri, Studies in Contemporary Islam

"Adeed Dawisha has given us a timely, illuminating and highly readable overview of the history of the Arab national movement, from its origins in the 19th century to the present. His book combines an analysis of the ideas of Arab nationalism and their roots in European thought, with a fast-moving political narrative, full of dramatic ups an downs. . . . [He] brings to his task a rare personal insight, as well as mastery of the voluminous Arabic sources on the subject. There is a great deal of new material here which not only brings events alive, but also leads to fresh assessments and a better-informed understanding of the politics of one of the world's most volatile and violent regions."—Avi Shlaim, The Observer

"Dawisha successfully provides one of the most comprehensive studies of Arab nationalism to date. His book combines both political science and historical approaches in order to paint a detailed and nuanced portrait of Arab nationalist ideology. . . . Such an authoritative source has much to offer academicians, students and scholars, as well as policymakers who deal with Middle Eastern politics."—Mohamed El-Moursi, Insight Turkey

"Adeed Dawisha's analysis of the rise and fall of Arab nationalism in the twentieth century exhibits clarity of exposition, thoroughness, and objectivity. The narrative is exceptional. Dawisha complements his own splendid credentials with excellent use of a large volume of memoir material from Arab leaders. There is no book that does as good a job."—William Quandt, University of Virginia

"Why does the world need this eminently readable book? Because academe is awash with speculation about the emergence of a 'new Arabism.' Dawisha's point is that anyone who lived through Arabism's heyday knows how disastrous it was, and that the new Arabist nostalgia ignores history. His treatment of the ill-fated United Arab Republic is a masterful account; the story of the decline is told with verve, in fluid and engaging prose."—Martin Kramer, Tel Aviv University