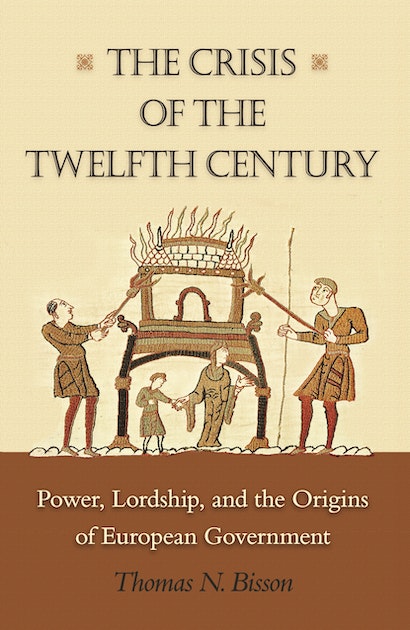 Medieval civilization came of age in thunderous events like the Norman Conquest and the First Crusade. Power fell into the hands of men who imposed coercive new lordships in quest of nobility. Rethinking a familiar history, Thomas Bisson explores the circumstances that impelled knights, emperors, nobles, and churchmen to infuse lordship with social purpose.

Bisson traces the origins of European government to a crisis of lordship and its resolution. King John of England was only the latest and most conspicuous in a gallery of bad lords who dominated the populace instead of ruling it. Yet, it was not so much the oppressed people as their tormentors who were in crisis. The Crisis of the Twelfth Century suggests what these violent people—and the outcries they provoked—contributed to the making of governments in kingdoms, principalities, and towns.

"Was the 'old public order' of Charlemagne and his successors so public and so ordered? Was the subsequent regime so close to anarchy? Bisson adds to this traditional account by thinking deeply about the benefits and disadvantages of government. He is very aware of the inhumanity of the past he studies. . . . Confronting this world of hunter and hunted, Bisson is inspired by attractively humane impulses. And he looks for public, accountable, official remedies for suffering and oppression."—Robert Barlett, New York Review of Books

"For some time, medievalists have associated the 12th century with 'renaissance.' . . .Thomas Bisson offers a radically different view, . . . [and] makes the case with considerable brio and insight. . . .A tremendously powerful vision of the period. Bisson's vision of a dark 12th century can be questioned [but] that does not mean it should be dismissed. The Crisis of the Twelfth Century will be essential reading for all medievalists."—John H. Arnold, Times Higher Education

"The story is an old one, but so many-sided as to invite constant retelling from new angles. Bisson has found a new angle, and writes with prodigious sweep and learning."—Alexander Murray, London Review of Books

"The sustained argument is a fascinating one, the attractions of the book increased by sections devoted to rather different geographical areas from those that dominate most surveys of medieval Europe. [Bisson's] effort to combine the traditionally separate fields of political and cultural history in explaining the 'origins of government' is admirable."—John Hudson, BBC History Magazine

"In an era when bold syntheses are still too rare, Bisson has taken on 12th-century government in the whole of western Europe, from Poland to Spain, to show with unusual clarity how the period was one of violence and exploitation and how 'government' was inseparable from the exercise of personal power. Bisson's take is controversial and will stir up opposition (it's part of the attraction of the book), but his vision, and his delight in showing patterns of real structural change, make his work refreshing; and I found his nearly 600 pages hard to put down."—Chris Wickham, History Today

"This is a book which scholars of central medieval power and society will have to ponder for a long time to come. Its sheer breadth, its ambition and the lightness with which it wears its scholarship all demand attention. . . . Few other books manage to use Europe's regional variation so elegantly to elaborate on coherent pan-European themes whilst avoiding any impression that developments were inevitable. Its contribution to the debate over changes in lordship and government will be massive. It will undoubtedly serve to pull historical interest back to the centre of medieval experience."—Theo Riches, Reviews in History

"The Crisis of the Twelfth Century is an unparalleled cultural history of power in medieval Europe, and a monumental achievement by one of today's foremost medievalists."—Spartacus Educational

"[T]he overall arc of the work's argument is impressive. . . . Bisson has provided historians with an impressive work that will hopefully spark new discussions of medieval lordship, politics, and government."—Jonathan R. Lyon, H-Net Reviews

"This is a deeply learned book, not for the faint of heart or the unsophisticated reader. Bisson presumes a thorough and comprehensive knowledge of the events and close readings of a wide range of texts. However, the astute reader will be rewarded with an illuminating comparative study of a pivotal point in the history of the European Middle Ages."—Theresa Earenfight, Journal of the Review of Politics

"Bisson's book . . . sweeps aside still-prevailing assumptions of teleology in political and constitutional history and forces historians of different areas of Europe to battle against any parochial instinct. That it raises so many questions is an indication of its considerable contribution to and departure from existing histories of governments and states of the central Middle Ages."—Alice Taylor, Speculum

"Bisson . . . is to be commended . . . for so effectively setting the agenda for future historians."—William Chester Jordan, Journal of Law and History Review

"This book reinforces Thomas Bisson's position as one of the most important contemporary historians of the Middle Ages. . . . Few have the knowledge of the period enjoyed by Bisson. . . . [T]his sophisticated, nuanced and subtle book will amply reward the reader's effort."—Peter Fleming, Labour

"In this persuasive work of comparative European history, Thomas Bisson overturns received ideas about change, 'Renaissance,' and 'government.' He enables us to feel almost physically the oppression of castles, the violence of horses, and all that was, even before its own crisis, the power of the lords ruling Europe. This masterpiece crowns a prolific career in history. It will stand as a great classic."—Jean-Claude Schmitt, école des Hautes études en Sciences Sociales

"Bisson's view is that power as lordship was not 'political' in this period but personal, patrimonial, self-indulgent, and above all violent. This book is a major contribution to the field, not only because it is the fullest development of Bisson's learned position, but because of the prodigious amount and varying character of the sources he commands and his deftness in deploying them."—Edward Peters, author of Europe and the Middle Ages

"This is an excellent book. In it, Bisson sums up a life's work and offers a grand narrative on major socioeconomic and sociopolitical changes in the central Middle Ages. There is no recent book that even attempts such a task as this. It is a very considerable contribution."—Chris Wickham, author of Framing the Early Middle Ages