A panoramic global history of the nineteenth century 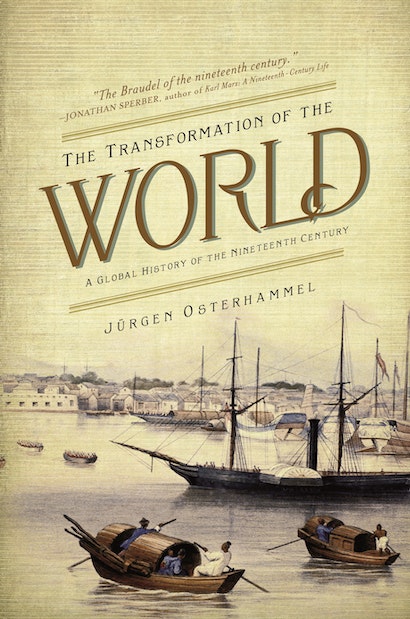 A monumental history of the nineteenth century, The Transformation of the World offers a panoramic and multifaceted portrait of a world in transition. Jürgen Osterhammel, an eminent scholar who has been called the Braudel of the nineteenth century, moves beyond conventional Eurocentric and chronological accounts of the era, presenting instead a truly global history of breathtaking scope and towering erudition. He examines the powerful and complex forces that drove global change during the “long nineteenth century,” taking readers from New York to New Delhi, from the Latin American revolutions to the Taiping Rebellion, from the perils and promise of Europe’s transatlantic labor markets to the hardships endured by nomadic, tribal peoples across the planet. Osterhammel describes a world increasingly networked by the telegraph, the steamship, and the railways. He explores the changing relationship between human beings and nature, looks at the importance of cities, explains the role slavery and its abolition played in the emergence of new nations, challenges the widely held belief that the nineteenth century witnessed the triumph of the nation-state, and much more.

This is the highly anticipated English edition of the spectacularly successful and critically acclaimed German book, which is also being translated into Chinese, Polish, Russian, and French. Indispensable for any historian, The Transformation of the World sheds important new light on this momentous epoch, showing how the nineteenth century paved the way for the global catastrophes of the twentieth century, yet how it also gave rise to pacifism, liberalism, the trade union, and a host of other crucial developments.

Jürgen Osterhammel is professor of modern and contemporary history at the University of Konstanz. He is the coauthor of Globalization: A Short History and a coeditor of A History of the World.

"Osterhammel has written one of the most important, consequential works of history to appear in the post-cold war era. It has, rightly, been called an instant classic. . . . [T]his classic book should be indispensable reading for historians and for politically curious world citizens everywhere. It could make us better, more capacious citizens, more aware of the world we live in."—Fritz Stern, The New York Review of Books

"A work of tremendous conceptual precision, breadth and insight, a masterpiece that sets a new benchmark for debates on the history of world society."—Benjamin Ziemann, Times Literary Supplement

"[A] big book in every sense. . . . An age of such panoramic creations deserves a chronicler with suitably panoramic inclinations. It has found a very able one in Jurgen Osterhammel."—Jeffrey Wasserstrom, Wall Street Journal

"A milestone of German historical writing, one of the most important historical books of the last several decades. . . . [A] mosaic-like portrait of an epoch."—Jürgen Kocka, Die Zeit

"[W]eighty in every sense of the word. . . . [A]n epic, masterly and sprawling mosaic of the age that built on, if only as reaction, foundations laid down by the Enlightenment. . . . Osterhammel's compelling structuring brings home that the way we understand the world today is largely determined by institutions and innovations of the 19th century—and a peculiarly Eurocentric lens they provide. Alive to the potential for bias that this inevitably brings, the German historian has taken pains to create a genuinely world history of the age. . . . [T]he rendering of such a mind-boggling tapestry of human experience is deft and accessible."—Ben Richardson, South China Morning Post

"[A] 1165 pp. German Braudel-like take on the importance of the 19th century."—Tyler Cowen, Marginal Revolution

"[V]ast, weighty, original, enthralling, exhausting and intimidating. . . . [I]t is impossible to do it full and adequate justice, even in a lengthy review such as this. Part monster-piece, part masterpiece, its limitations are inescapably those of the global history genre. . . . [I]t is a work of prodigious scholarship and astonishing authorial stamina; within the confines of the subject, it raises the study of global history to a new level of academic sophistication and geographical comprehensiveness; it abounds with memorable phrases and aphorisms, which betoken a lively and playful mind; and it offers wise and original insights about the many ways in which the 19th century made the world that we still, today, inhabit. If you only read one work of history this summer (and, believe me, it will take you all of a very long summer), then The Transformation of the World should definitely be it."—Sir David Cannadine, Financial Times

"Massive . . . interesting . . . impressive. . . . The coverage is in many respects much greater than that of Braudel, not only geographically but also conceptually. . . . Osterhammel's ambition, industry and scale shows up the work of all-too-many other historians. Similar books should be produced for other centuries. Let us hope that British historians can rise to the challenge of writing them."—Jeremy Black, Standpoint

"This superb study gives form to a global history that lasts from the late 18th well into the 20th century and it does so without oversimplifying. It is exhilarating to find a system builder with such a feeling for nuance and difference. The only study comparable is Christopher Bayly's The Birth of the Modern World. This thick, dense book will prove most useful for scholars; the history enthusiast will find there is no match for this resource. In it, there is much to appreciate."—Library Journal

"Jürgen Osterhammel's fine The Transformation of the World: A Global History of the Nineteenth Century . . . swoops, shimmies and carves ellipses and spirals through the facts to give readers an insightful view of the nineteenth century in all its complexity and confusion. In a great work of scholarship, Professor Osterhammel . . . and his able translator . . . Patrick Camiller have fashioned a remarkable picture of the nineteenth century. . . . [It] brings a new meaning to the term block buster."—Satyajit Das, naked capitalism

"Jürgen Osterhammel's rich and thoughtful book The Transformation of the World, skillfully translated by Patrick Camiller, has the great virtue of addressing with careful attention what was and was not transformed over the 19th century."—Frederick Cooper, Public Books

"Writing meaningfully about global history is ambitious at best, but this work on the 19th century succeeds. . . . Nearly every page offers new insights about world history and specific countries' global contexts. This book is eminently suitable for advanced general readers and undergraduates and should be mandatory reading for all graduate students of modern history as a way to set their own specializations in a broader context."—Choice

"There have been two massive history books published this year that deserve to be widely read. One is the English translation of The Transformation of the World: A Global History of the Nineteenth Century by the German historian Jürgen Osterhammel."—Christopher Sylvester, Financial Times

"Professor Jurgen Osterhammel's fine book is anything but a linear recitation of events. Instead, it swoops, shimmies and carves ellipses and spirals through facts to give readers a remarkable picture of the 19th century, which has shaped much of the present world."—Satyajit Das, Bloomberg Businessweek

"The patient reader who finishes this 1,000-page tour of the 19th century emerges with a richer, deeper grasp, a better sense of what is truly unique about the global village, and global Asia, of our own times. This is world history at its best."—John Delury, Global Asia

"In this sweeping panorama, Osterhammel captures the dramatic shifts in how people lived and understood life during the nineteenth century. . . . Osterhammel offers a rich 'global history' of the century, one that features the West prominently but avoids Eurocentrism with vivid portraits of non-Western peoples and societies."—Foreign Affairs

"The Transformation of the World is lavishly reinforced with critical apparatus (that, too, must have been a labor of Hercules to translate—I honestly never expected to see this book in English), but by far its greatest attraction is the intelligence and more important the wisdom of its author. It's a towering achievement no serious reader should miss."—Steve Donoghue, Open Letters Monthly

"The Transformation of the World stands as both an essential compendium of knowledge about human civilization on planet Earth in the nineteenth century and a unique monument of historical art."—Matthew Karp, Journal of American History

"[A] colossal achievement. . . . The Transformation of the World stands as both an essential compendium of knowledge about human civilization on planet Earth in the nineteenth century and a unique monument of historical art."—Matthew Karp, Journal of American History

"A tome that the scholar who exults in original thought will fall in love with. It is a fascinating expose. . . . This is definitely a book for my shelves, reinforced though they will have to be."—Ian Lipke, MediaCulture.org

"Osterhammel has given us the densest and arguably the most closely reasoned volume yet on this period."—Patrick Manning, H-Net Reviews

"The Transformation of the World is both a pleasure and a necessary education. The present reader, for one, found the book hard to put down—and not on account of its weight."—Mark Gamsa, European History Quarterly

"Reading The Transformation of the World is both a pleasure and a necessary education. The present reader, for one, found the book hard to put down—and not on account of its weight. . . . Apart from the vast amounts of information and abundant food for thought and debate to be found in this study of the nineteenth century, there are two main lessons that the practising historian may learn from the master class that Osterhammel has given in The Transformation of the World: one about the historiographical potential of the comparative method, and the other about the dividends of rigorous independent thinking, intelligibly and forcefully expressed."—Mark Gamsa, European History Quarterly

"Jürgen Osterhammel is the Braudel of the nineteenth century. His global panorama is a triumph of the historian's craft. In elegant and lucid prose, he examines, across the entire world, the Janus face of the era: both distant past and yet also origin of our contemporary condition."—Jonathan Sperber, author of Karl Marx: A Nineteenth-Century Life

"The comparison with Braudel's magnum opus is not misplaced. Osterhammel's The Transformation of the World is a brilliant work of historical imagination, of absolutely show-stealing erudition, and of wide-apertured original insight! Reflecting on space and time, empire and slavery, war and peace, economy and diplomacy, monarchy and opera, and much else, Osterhammel changes our whole understanding of the nineteenth century."—Helmut W. Smith, Vanderbilt University

"This big, kaleidoscopic book follows the many strands of change over the course of a long century of transformation. It belongs on a short list of key resources for understanding the origins of many of the challenges we face today."—John E. Wills, Jr., University of Southern California

"Arguably the most important book by a German historian to be published in the past quarter century. It is a truly magisterial account of the global history of the nineteenth century, powerfully argued and beautifully rendered."—Sven Beckert, author of The Monied Metropolis: New York City and the Consolidation of the American Bourgeoisie, 1850-1896