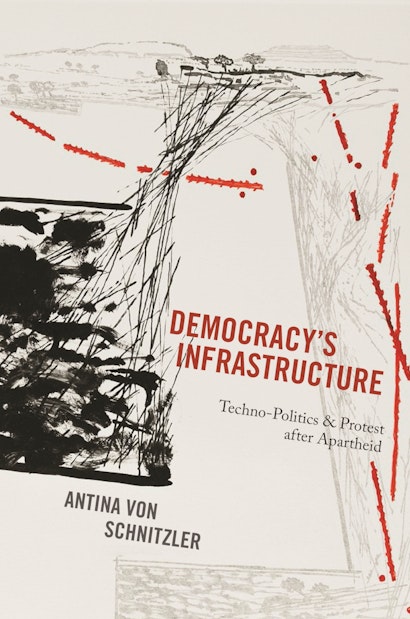 In the past decade, South Africa’s “miracle transition” has been interrupted by waves of protests in relation to basic services such as water and electricity. Less visibly, the post-apartheid period has witnessed widespread illicit acts involving infrastructure, including the nonpayment of service charges, the bypassing of metering devices, and illegal connections to services. Democracy’s Infrastructure shows how such administrative links to the state became a central political terrain during the antiapartheid struggle and how this terrain persists in the post-apartheid present. Focusing on conflicts surrounding prepaid water meters, Antina von Schnitzler examines the techno-political forms through which democracy takes shape.

Von Schnitzler explores a controversial project to install prepaid water meters in Soweto—one of many efforts to curb the nonpayment of service charges that began during the antiapartheid struggle—and she traces how infrastructure, payment, and technical procedures become sites where citizenship is mediated and contested. She follows engineers, utility officials, and local bureaucrats as they consider ways to prompt Sowetans to pay for water, and she shows how local residents and activists wrestle with the constraints imposed by meters. This investigation of democracy from the perspective of infrastructure reframes the conventional story of South Africa’s transition, foregrounding the less visible remainders of apartheid and challenging readers to think in more material terms about citizenship and activism in the postcolonial world.

Antina von Schnitzler is an anthropologist and assistant professor in the Graduate Program in International Affairs at The New School.

"Von Schnitzler provides a well-documented scholarly analysis of threats to democracy in South Africa. Specifically, she analyzes the gap between South Africa's success in conducting open elections and maintaining a relatively open political system and the continued reliance upon illiberal techno-political infrastructure from the previous regime in the form of prepaid meters for such public services as electricity and water."—Choice

"Why does protest in contemporary South Africa focus on seemingly apolitical things such as leaky pipes and water meters? What do these inconspicuous infrastructures tell us about the state's attempt to fashion new democratic citizens? Grounded in deep ethnography, von Schnitzler's book is an imaginative work about the everyday technologies and popular illegalities that form postapartheid life in South Africa."—Brian Larkin, author of Signal and Noise: Media, Infrastructure, and Urban Culture in Nigeria

"Democracy's Infrastructure takes an incisive, illuminating look at the technopolitics of water in South Africa. Through close and careful observation, this book reveals how specific technological mechanisms enable and constrain government projects, and how forms of measurement and pricing shape new, market-oriented subjects. This is a major contribution, one that joins the study of social movements and political resistance to the new anthropology of infrastructure in an entirely convincing way."—James Ferguson, author of Give a Man a Fish: Reflections on the New Politics of Distribution

"Using the example of the prepaid water meter as a starting point, this richly interdisciplinary book explores the politics of infrastructure in post-apartheid South Africa. Its argument is built on extensive primary research combined with a thorough grounding in a wide range of existing literature."—Matthew Gandy, University of Cambridge

"A theoretically savvy account of how the distribution of prepaid technologies in apartheid South Africa dovetailed with the emergence of new forms of neoliberal governance, Democracy's Infrastructure shows how technology continues to animate life there today. One of the most innovative post-apartheid studies in recent years, this is required reading for those interested in understanding the complexities of the South African democratic transition."—Steven Robins, University of Stellenbosch