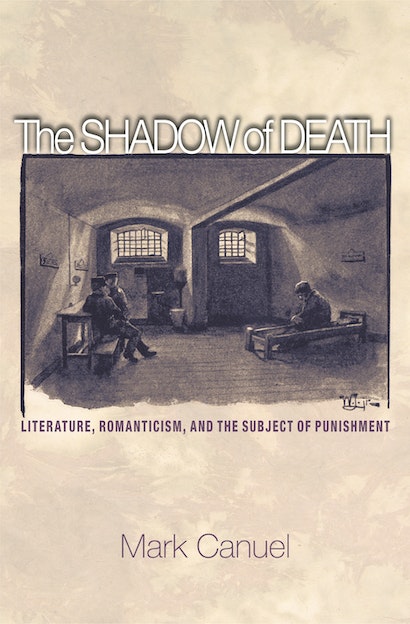 The Shadow of Death is a timely and ambitious reassessment of English Romantic literature and the unique role it played in one of the great liberal political causes of the modern age. Mark Canuel argues that Romantic writers in Great Britain led one of the earliest assaults on the death penalty and were instrumental in bringing about penal-law reforms. He demonstrates how writers like Percy Bysshe Shelley, Lord Byron, William Wordsworth, and Jane Austen defined the fundamental contradictions that continue to inform today’s debates about capital punishment.


Celebrated reformers like Sir Samuel Romilly and William Ewart campaigned against the widespread use of death to punish crimes ranging from murder to petty theft, but they were most influential for initiating a system of penalties built upon conflicting motivations and justifications. Canuel examines the ways Romantic poets and novelists magnified these tensions while treating them as uniquely aesthetic opportunities, seized upon contending rationales of punishment to express imaginative power, and revealed how the imagination fueled the new penal code’s disturbing vitality. Death-penalty reform, Canuel argues, in fact emerged from a new way of thinking about punishment as a negotiation among rationales rather than a seamless whole, with leniency and severity constantly at odds. He concludes by exploring how Romantic penal reform continues to influence contemporary views about the justice — and injustice — of legal sanctions.

Mark Canuel is Associate Professor of English at the University of Illinois, Chicago. He is the author of Religion, Toleration, and British Writing, 1790-1830.

"Canuel's book is well researched and groundbreaking. Scholars of Romanticism are likely to know of scattered references to the death penalty, but few, I think, will have known before reading Canuel's provocative book of its pervasiveness as an issue of concern."—Celeste Langan, author of Romantic Vagrancy: Wordsworth and the Simulation of Freedom

"The Shadow of Death derives its strength and originality from pinpointing the persistent power—political and aesthetic—of punishment in British Romantic writing. In a series of energetic and ingenious readings of works written in an age pervaded by the rhetoric of penal reform, Canuel calls attention to various 'negotiations' between the logics of reform and sanctioned murder in order to show their inevitable mutuality. Another significant feature of Canuel's argument is the strong link between the exercise of the Romantic imagination and the exercise of corporal punishment. This is itself a forceful argument, and an original one, made in often unpredictable ways. The topic and major arguments of this book ought to be of interest not simply to scholars of the period, but also to those interested in the larger philosophical and political debates surrounding the death penalty."—Mary A. Favret, author of Romantic Correspondence: Women, Politics, and the Fiction of Letters