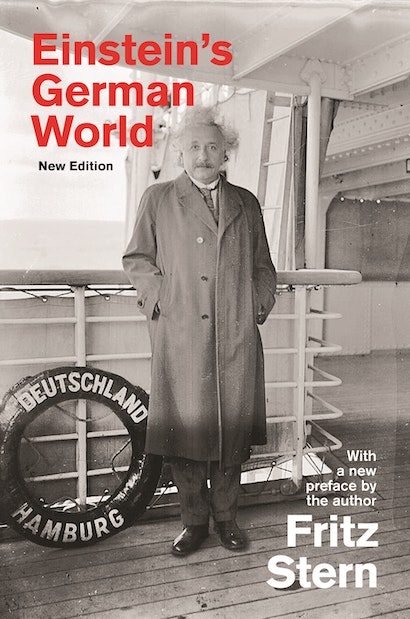 The French political philosopher Raymond Aron once observed that the twentieth century “could have been Germany’s century.” In 1900, the country was Europe’s preeminent power, its material strength and strident militaristic ethos apparently balanced by a vital culture and extraordinary scientific achievement. It was poised to achieve greatness. In Einstein’s German World, the eminent historian Fritz Stern explores the ambiguous promise of Germany before Hitler, as well as its horrifying decline into moral nihilism under Nazi rule, and aspects of its remarkable recovery since World War II. He does so by gracefully blending history and biography in a sequence of finely drawn studies of Germany’s great scientists and of German-Jewish relations before and during Hitler’s regime.


Stern’s central chapter traces the complex friendship of Albert Einstein and the Nobel Prize-winning chemist Fritz Haber, contrasting their responses to German life and to their Jewish heritage. Haber, a convert to Christianity and a firm German patriot until the rise of the Nazis; Einstein, a committed internationalist and pacifist, and a proud though secular Jew. Other chapters, also based on new archival sources, consider the turbulent and interrelated careers of the physicist Max Planck, an austere and powerful figure who helped to make Berlin a happy, productive place for Einstein and other legendary scientists; of Paul Ehrlich, the founder of chemotherapy; of Walther Rathenau, the German-Jewish industrialist and statesman tragically assassinated in 1922; and of Chaim Weizmann, chemist, Zionist, and first president of Israel, whose close relations with his German colleagues is here for the first time recounted. Stern examines the still controversial way that historians have dealt with World War I and Germans have dealt with their nation’s defeat, and he analyzes the conflicts over the interpretations of Germany’s past that persist to this day. He also writes movingly about the psychic cost of Germany’s reunification in 1990, the reconciliation between Germany and Poland, and the challenges and prospects facing Germany today.


At once historical and personal, provocative and accessible, Einstein’s German World illuminates the issues that made Germany’s and Europe’s past and present so important in a tumultuous century of creativity and violence.

Fritz Stern is University Professor Emeritus at Columbia University. He has been a member of the Editorial and Executive Committees of The Collected Papers of Albert Einstein since 1984.

"Stern's portrait of [Einstein] is sparklingly comic and profound. . . . He writes with the wisdom and truth of a historian who never fails to empathize with the human uncertainty and frailty that operate in extreme as well as everyday historical conditions. . . . No one has written better on the country's rise and fall than Fritz Stern."—Jackie Wullschlager, Financial Times

"Frtiz Stern's writing has an unmatched authority and a magisterial sweep that throws a brilliant light on the tragic disintegration of a noble culture, one in which science reigned supreme. . . . Stern's is the civilized voice of reason and understanding; his book is revealing, absorbing and often poignant."—Walter Gratzer, Nature

"A superb and gripping collection of essays."—Stanley Hoffmann, Foreign Affairs

"This is a book pervaded by a genuine sense of pity. Fritz Stern is alive to moral and historical ambiguity, arguing that there is no simple judgment on the compromises of a Max Planck, any more than there is a simple way to characterize German-Jewish relations or the circumstances that made the Holocaust possible. Fritz Stern has been successful beyond the historical profession as a voice of liberal tolerance. . . . [He] has earned his reputation as a non-historian's historian."—David Blackbourn, London Review of Books

"A rich collection of essays—some scholarly, others more personal—written during the past decade. Without ever pointing an accusatory finger, Stern's approach helps readers to grasp how the extraordinary potential for 'what could have been Germany's century' ended so disastrously."—Publishers Weekly

"[In these] elegantly written essays. . . . we come to understand something about the fabric of this world that no abstract social or cultural theory can provide. . . . [I]t was a bright and shining moment and we should thank Fritz Stern for bringing it back to life so vividly."—Omer Bartov, The Wall Street Journal

"In his wide-ranging collection of nine essays, lectures and Festschriften, the eminent historian Fritz Stern, who grew up in Germany 'in the shadow of the First World War,' assembles a complex mosaic—mainly from historical and personal profiles of eminent Jewish scientists—illustrating the attitudes, prejudices, complexities, intricacies and subtle ambiguities of the relationship between Germans and Jews before Adolf Hitler and thereafter. Anti-Semitism, Mr. Stern finds, came in the most diverse guises—from irritation at Jewish successes to paranoid fear and fury at the thought of Jewish power threatening German life and virtue. He dismisses the view that the rabid anti-Semitism in Hitler's party was a reflection of the sentiments of German culture and questions theories that it formed an important bond between Hitler and the German population."—Viola Herms Drath, The Washington Times

"[E]ssential reading for any student of Einstein."—Jeremy Bernstein, The Times Higher Education Supplement

"Well-documented, extremely readable collection. . . . What makes this compendium a must for those interested in European history is that Stern not only places all of these people within the history of science, but also discusses how they both reflected and influenced the times in which they lived."—Choice

"A small series of fine . . . essays on eminent personalities surrounding Albert Einstein in pre-Hitler Germany, and some considerations illuminating the changes that followed each of the two world wars."—Helmut Rechenberg, Physics Today

"Fritz Stern is alive to moral and historical ambiguity, arguing that there is no simple judgement on the compromises of a Max Planck, any more that there is a simple way to characterize German-Jewish relations or the circumstances that made the Holocaust possible."—London Review of Books

"An utterly terrific, invigorating book on both the history of, as well as the underlying influential trajectory of German culture. . . . There really is something profoundly prophetic and poignant about Stern's writing, which accounts for Einstein's German World being such a terrific and vital one-off."—David Marx Book Reviews

"This wide-ranging collection of essays reminds us again that Fritz Stern is a living national treasure—in both Germany and the United States. It will interest and delight anyone who wishes to think deeply about how and why Germany, with all its potential, wrecked the century that it tried to dominate, and left a legacy that haunts us still. From Einstein to Goldhagen, Fritz Stern shows us again the extraordinary depth of his historical insights, and raises our understanding to a different level."—Ambassador Richard Holbrooke

"Stern gives us penetrating character sketches of eminent Jews in pre-Nazi Germany, and he makes us feel for those whose lives ended in tragedy."—Max Perutz, Nobel Laureate in chemistry and author of I Wish I'd Made You Angry Earlier: Essays on Science, Scientists, and Humanity

"Stern, prominent historian of Germany, who knew Einstein personally, a cousin of the late Otto Stern, intimate friend of Einstein, is uniquely qualified to write of Einstein's world. His main essay on Einstein and Haber, Stern's godfather, brilliantly sketches the contrast between those who saw the Nazi threat in time and those who saw it too late. A splendid book."—Abraham Pais, Rockefeller University, author of A Tale of Two Continents and Subtle Is the Lord: The Science and Life of Albert Einstein

"The essays are clearly from a master's hand—well-crafted, thoughtful, learned, and wise. The biographical essays display Stern's gifts as a portraitist. With a few swift and confident strokes, he captures a series of extraordinary characters at moments of personal and public crisis. The historiographical essays display the author's critical intelligence and synthetic ability."—James Sheehan, Stanford University