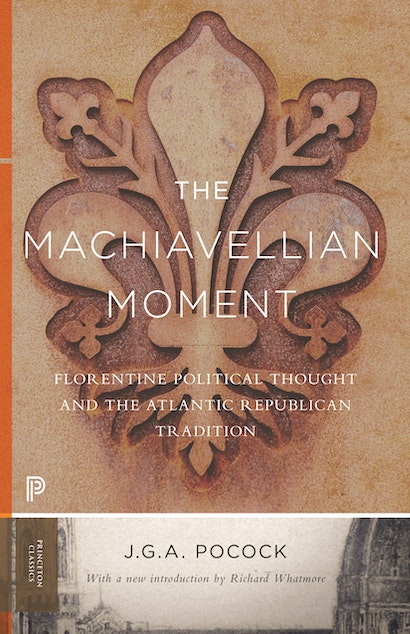 Originally published in 1975, The Machiavellian Moment remains a landmark of historical and political thought. Celebrated historian J.G.A. Pocock looks at the consequences for modern historical and social consciousness arising from the ideal of the classical republic revived by Machiavelli and other thinkers of Renaissance Italy. Pocock shows that Machiavelli’s prime emphasis was on the moment in which the republic confronts the problem of its own instability in time, which Pocock calls the “Machiavellian moment.”

After examining this problem in the works of Machiavelli, Guicciardini, and Giannotti, Pocock turns to the revival of republican ideology in Puritan England and in Revolutionary and Federalist America. He argues that the American Revolution can be considered the last great act of civic humanism of the Renaissance and he relates the origins of modern historicism to the clash between civic, Christian, and commercial values in eighteenth-century thought.

This Princeton Classics edition of The Machiavellian Moment features a new introduction by Richard Whatmore.

J.G.A. Pocock is the Harry C. Black Professor of History Emeritus at Johns Hopkins University. His many books include Political Thought and History; Politics, Language, and Time; and The Ancient Constitution and the Feudal Law.  Richard Whatmore is professor of modern history at the University of St Andrews and director of the St. Andrews Institute of Intellectual History. He is the author of Republicanism and the French Revolution and Against War and Empire.

"The Machiavellian Moment raised a thousand issues, settled two or three, and gave historians and philosophers a generation's work. It is a must-read and a must-have."—Philip Pettit, William Nelson Cromwell Professor of Politics, Princeton University

"In analyzing the history of consciousness as explicated through philosophers, political theorists, historians, theologians, lawyers, and prophets, [this book] presents a new interpretation of wide-ranging problems. It should be of great value to scholars in many disciplines concerned with the history of ideas."—Marvin B. Becker