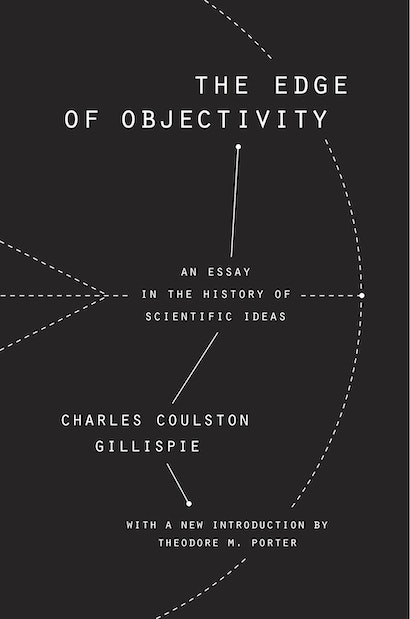 Originally published in 1960, The Edge of Objectivity helped to establish the history of science as a full-fledged academic discipline. In the mid-1950s, a young professor at Princeton named Charles Gillispie began teaching Humanities 304, one of the first undergraduate courses offered anywhere in the world on the history of science. From Galileo’s analysis of motion to theories of evolution and relativity, Gillispie introduces key concepts, individuals, and themes. The Edge of Objectivity arose out of this course.

It must have been a lively class. The Edge of Objectivity is pointed, opinionated, and selective. Even at six hundred pages, the book is, as the title suggests, an essay. Gillispie is unafraid to rate Mendel higher than Darwin, Maxwell above Faraday. Full of wry turns of phrase, the book effectively captures people and places. And throughout the book, Gillispie pushes an argument. He views science as the progressive development of more objective, detached, mathematical ways of viewing the world, and he orchestrates his characters and ideas around this theme.

This edition of Charles Coulston Gillispie’s landmark book introduces a new generation of readers to his provocative and enlightening account of the advancement of scientific thought over the course of four centuries. Since the original publication of The Edge of Objectivity, historians of science have focused increasingly on the social context of science rather than its internal dynamics, and they have frequently viewed science more as a threatening instance of power than as an accumulation of knowledge. Nevertheless, Gillispie’s book remains a sophisticated, fast-moving, idiosyncratic account of the development of scientific ideas over four hundred years, by one of the founding intellects in the history of science.

Featuring a new foreword by Theodore Porter, who places the work in its intellectual context and the development of the field, this edition of The Edge of Objectivity is a monumental work by one of the founding intellects of the history of science.

Charles Coulston Gillispie (1918–2015) was Dayton-Stockton Professor Emeritus of History of Science at Princeton University. Theodore M. Porter is Distinguished Professor of History and the Peter Reill Chair in European History at the University of California, Los Angeles.

"Gillispie has written a bold, penetrating, and very personal book. . . . Deft evocation of personality, bright flashes of biographical detail, and enough connected narrative to show the direction and complexity of scientific advance, are all subordinated to the task of examining the crucial attitudes and ideas, the signal commitments of thought, which have shaped modern science and troubled the mind of modern man. . . . All told, this is an exciting book, based on wide and often deep scholarship, a pleasure to read and to meditate upon. It is sure to be widely read, often quoted, and interminably discussed."—Henry Guerlac, The New York Times

"A provocative and readable interpretation of major advances in certain departments of scientific thought from Galileo to James Clerk Maxwell. . . . [S]harp, enlightening and entertaining."—Scientific American

"This is a wonderful book. . . . Not attempting a survey, [Gillispie chooses] certain aspects to write about with originality and depth [and provides] a light of understanding which diffuses over a whole epoch. . . . We have thus a set of panels starting with Galileo, Kepler, and seventeenth-century cosmology, the eighteenth-century Enlightenment culminating in Lavoisier, the life sciences leading up to Lamarck and Darwin, and nineteenth-century energetics and field physics."—Giorgio de Santillana, American Scientist

"An excellent book, stimulating for someone just beginning to take an interest in the history of scientific thought, and sufficiently scholarly in its material and conclusions to be worth reading by the specialist, too."—R. Harr, Journal of the Royal Institute of Chemistry

"By far the best account of the movement of scientific ideas in Galileo, Newton, Lavoisier, Darwin, Maxwell, Einstein and other scientists who have sharpened the cutting edge of scientific probing."—Journal of the History of Ideas

"Admirably clear and elegant. . . . [A]n excellent book."—Journal of the Royal Institute of Chemistry